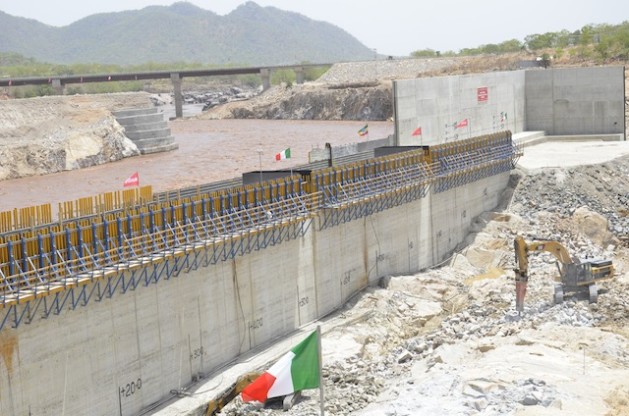 Ethiopia invests more of its resources in hydropower than any other country in Africa. Pictured here is the Grand Ethiopian Renaissance Dam, situated in Ethiopia’s Benishangul-Gumuz Region on the Blue Nile. Credit: William Davison/IPS

ADDIS ABABA , Jun 5 2013 (IPS) - Ethiopia’s long-term hydropower strategy is proving to be both a source of economic sustenance and contention. In becoming Africa’s leading power exporter through the construction of a series of dams across the country, Ethiopia could threaten the lives of millions who depend on the Nile River’s waters.

This Horn of Africa nation invests more of its resources in hydropower than any other country in Africa – one third of its total GNP of about 77 billion dollars.

But at the centre of Ethiopia’s hydropower development is a tough ethical question: which has the greater negative impact?

Alessandro Palmieri, a lead dam specialist at the World Bank, told IPS: “Is it the impact on Ethiopia’s population (who will not have electricity) … or the negative impact on half a million people (who will be displaced by the construction of the dams)? One tree falling always makes more sound than 10,000 trees growing.”

Ethiopia has ambitious targets. It currently generates 2,000 MW from six hydroelectric dams and will increase its power generation to 15,000 GWh, according to state power provider Ethiopian Electric Power Corporation (EEPCO).

According to a World Bank report published in 2010, only 17 percent of the country’s 84.7 million people had access to electricity. EEPCO states that by 2018, 100 percent of the population will have access to power.

Despite the ethical issues, Ethiopia’s hydropower focus is fuelling growth and development and is offering an example for other African countries to follow. “Africa is currently only using seven percent of its hydropower potential. Per capita consumption of water in Africa is shameful,” Palmieri said.

Ethiopia’s plan to become the powerhouse of Africa gained momentum when it began to divert the Nile River’s waters to start filling the Grand Ethiopian Renaissance Dam on May 28. On completion in 2017 it will be Africa’s largest power project, generating 6,000 GW.

However, the project has been beset by controversy regarding its potential environmental impact since it was announced in 2011.

The first provisional impact study by a technical committee

has only just been released this year, on Jun. 1, two years into construction, and states that the dam will have no significant effects on downstream countries. Egypt called the report “inadequate”.

The Gibe III Dam, which will generate 1,800 MW, is being built in southeast Ethiopia on the Omo River at a cost of 1.7 billion dollars and is expected to earn the government over 400 million dollars annually from power exports.

But it will not bring development to Ethiopian communities along the Omo River.

“The Gibe III dam will wreak havoc and destruction on the lives and livelihoods of hundreds of thousands of tribal people in Ethiopia’s Lower Omo Valley and the peoples living around Kenya’s Lake Turkana who depend on the Omo River for survival,” Elizabeth Hunter, from Survival International, an organisation working for the rights of local ethnic groups across the globe, told IPS.

According to the World Water Council (WWC), an international think tank for world water management, strides in Ethiopia’s hydropower development over the last decade have increased the annual average water storage per person from 40 cubic metres to 240.

Water storage in large dams makes ecological sense, provides a key adaptation measure to mitigate the effects of climate change and is a boost to growth and development, according to Ben Braga, president of WWC.

“Water storage is a good solution to the problems of climate variability and uncertainty. In terms of energy generation and the water needs of industry and agriculture, hydropower is a good solution. Our policy is: more storage equals more resilience,” he told IPS.

However, there is still a long way to go to catch up with the United States, which stores 5,000 cubic metres per citizen per year.

Diverting the flow of the Nile to the Grand Ethiopian Renaissance Dam will provide hydroelectricity not only for Ethiopia but also for neighbouring countries. Ethiopia plans to sell 2,000 MW to northern Kenya while Djibouti currently receives 80 percent of its electricity (50 to 70 MW) from Ethiopia.

“After meeting national demand, surplus electricity will be supplied to neighbouring countries. Our hydropower will benefit economic development in the Horn of Africa region,” Miheret Debebe, chief executive officer of EEPCO, told IPS.

Upstream countries like Egypt have had to enter into a new era of dialogue and cooperation with Nile basin countries to safeguard future access to the Nile waters. It was a critical move for 160 million people who are said to live downstream along the Nile and depend on its waters.

“When Ethiopia announced its plan to build the largest dam in Africa on the Blue Nile in 2011 we entered a new era of riparian politics. Since then the Nile Basin Initiative has been crucial to ensuring cooperation and long-term water access between the Nile states,” Braga said.

However, human rights violations damage the country’s hydropower policies, according to international rights groups such as Human Rights Watch and Survival International. These organisations have reported cases of violence and intimidation, which have been carried out to forcefully move indigenous tribes from their land in the Lower Omo valley for the hydropower project and large-scale commercial plantations.

Media access to the Omo Valley has become very difficult and much of the area has been ring-fenced by government security forces. However, a researcher for Survival International managed to speak to members of indigenous groups affected by the dam’s construction.

One member of the local Mursi ethnic group, a pastoralist community, told Survival International: “The government says cattle and people have to move from the Omo Valley to where there is no grass and no crops. So that means we and the cattle will die together.”