ADDIS ABABA, Feb 6 2010 (IPS) - Ethiopia is building a 240-metre high dam on the Omo River that is intended to end the country’s electricity shortage and supply power to neighbouring countries. Not everyone’s happy. 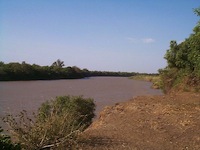 What will happen to the Omo River and the lake it feeds if the Gilgel Gibe III dam is completed? Credit: Oxonhutch/Wikimedia

The Gilgel Gibe III dam will hold back 14.7 million cubic metres of water. Its 1,870 MW generating capacity will be a significant boost for the Ethiopian Electric Power Company (EEPCO) which has plans to extend electricity supply within the country and export power to other countries in East Africa.

A 1.7 billion dollar contract to build the dam has been awarded to Italian multinational Salini Costruttori SPA. But the project’s critics have assembled a damning dossier of problems with it.

Two environmental organisations, Friends of Lake Turkana and International Rivers, are challenging the ecological soundness of the project. They say it threatens biodiversity in the Omo River and Lake Turkana which it feeds. The basin has large populations of Nile crocodiles, hippopotamus, and over 40 different species of fish.

IR and FoLT say changes in the river’s flow will also put the livelihoods of up to 200,000 people who depend on the lake for fishing, herding and irrigation at risk.

The groups have raised questions over the quality of the environmental and social impact studies completed for the project.

Gilgel Gibe III’s opponents also point out that the contract to build the dam was not awarded through a competitive international tender; it was negotiated directly with Salini, in violation of Ethiopia’s procurement guidelines.

EEPCO argues that both Ethiopian and international procurement guidelines allowed Gibe III’s contract to be reached without a tender process due to its size and huge financial requirements. EEPCO CEO Miheret Debebe says the project’s opponents are using false allegations to try to stop the project.

However Ken Ohashi, World Bank country director for Ethiopia and Sudan, confirmed that the omission of a competitive tender means the Bank cannot loan the Ethiopian government money for the project. This does not rule out World Bank involvement entirely.

“In a situation like this, there is a possibility for us, in line with our guidelines, to help mobilise financing from the private market to finance the project by providing a guarantee to those interested in financing it,” Ohashi told IPS.

“If decided, we will provide guarantee against certain types of risk of non-repayment to commercial financiers – basically ‘political’ rather than ‘commercial’ risk of repayment,” he said.

Construction on Gibe III is already more than a third complete, but more money will be needed. The Ethiopian government’s task of addressing concerns – environmental, social, technical and financial – in order to secure a World Bank credit guarantee has now been complicated by problems facing an earlier phase of the massive hydroelectric project.

Barely two weeks after it was formally opened on Jan. 14, the Gilgel Gibe II hydroelectric power station suffered a collapse in its main tunnel, forcing closure of the new facility while it is repaired.

Gibe II, also built by Salini, has – or had – a generating capacity of 420MW; it relied on water released from the Gilgel Gibe I dam channeled through a 26 kilometre tunnel into the Omo River valley. The terms for this project too were negotiated between the Ethiopian government and Salini without competitive bidding.

This was against the advice of both Italy’s finance ministry and DGCS’s own internal evaluation unit. Reviewing that advice, CRBM lists the flaws: a no-bid contract, an inadequate feasibility study, the absence of funds for environmental mitigation, and an unrealistic projection for servicing the loan.

The European Investment Bank also loaned the project 50 million euros ($69 million at today’s exchange rate); according to the CRBM accepting Ethiopia’s argument that it faced an emergency electrical shortage in lieu of more complete preparation and procedure.

Construction ran into severe difficulties as the tunneling engineers encountered unexpected mud, sand and aquifers; the project was finally completed two years behind schedule, with the Ethiopian government – and taxpayers – picking up the cost overrun as the contract held Salini liable for any delays due to engineering failures, while these problems were due to an inadequate geological survey.

In 2009, a group of eight academics and consultants collaborating as the Africa Resources Working Group (ARWG) published a sharp critique of the studies done for Gibe III. The ARWG says that contrary to the findings of the environmental and social impact assessments provided by Salini and EEPCO, the downstream impacts of the dam will likely be devastating.

They predict radical reduction of water flowing into Lake Turkana; the loss of cultivation of seasonally-flooded land in the Omo River delta, and of riverine forest and woodland the length of the river, damaging biodiversity and livelihoods.

“Altogether, more than 200,000 indigenous peoples of the lowermost Omo Basin are dependent on riverside and delta recessional cultivation… This population would face massive economic losses, with widespread severe hunger, disease and loss of life occurring on a regional scale, if the Gibe III dam is completed.”

The authors reject the official studies’ claims that lake water levels are already dropping due to evaporation from uncontrolled flooding, or that using the dam to deliberately increase water flow in the river during the dry season will alleviate drought.

Instead, they explain their view that extensive leakage through fissures in the walls of the eventual reservoir behind the dam, as well as the planned abstraction of water for new commercial agriculture and industrial development just downstream will see water levels in Lake Turkana fall by as much as 10 metres. The ARWG also expresses concern that clay rich soil around the dam could become prone to landslides as it fills up – and to top it off: the dam site is on an active earthquake fault line.

“An accurate assessment of environmental and social processes within the lower Omo Basin indicates that completion of the Gibe III dam would produce a broad range of negative effects, some of which would be catastrophic in the tri-country region where Sudan, Ethiopia and Kenya intersect.”

As the World Bank’s review board meets on Mar. 5th, it will have much to consider. At stake is the life of a river, the fate of 200,000 people along its banks, and the commitments to transparent and effective aid made by governments and multilateral institutions alike.