World’s Biggest Hydropower Scheme Will Leave Africans in the Dark

CAPE TOWN , Nov 15 2011 (IPS) - South Africa and the Democratic Republic of Congo have signed an agreement to build a major hydroelectric power project, which is said to bring electricity to more than half of the continent’s 900 million people. But economic analysts warn that foreign investors will prevent the grid from benefiting the general public. 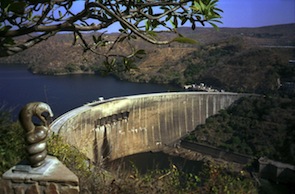 Sub-Saharan Africa has large potential for hydropower generation, but is yet to exploit it. Credit: Kristin Palitza/IPS

Together with his Congolese counterpart President Joseph Kabila, South African President Jacob Zuma witnessed on Nov. 12 the signing of a deal to construct the Grand Inga Dam. Grand Inga will be built 225 kilometres southwest of the DRC capital Kinshasa, on one of the largest waterfalls in the world, the Inga Falls, where the Congo River drops almost a hundred metres and flows at an enormous speed of 43 cubic metres per second.

The Grand Inga hydropower project will have a capacity of 40,000 megawatts (MW) – more than twice the power generated by the Three Gorges Dam in China, the world’s largest hydropower dam, and more than a third of the total electricity currently produced in Africa.

“It will enhance energy access to clean and efficient energy across the continent and contribute significantly towards a low carbon economy and economic development,” declared Zuma in the DRC’s second-largest city Lubumbashi, where the signing took place. Zuma described the event as “a day to prove Afro-optimists right.”

Grand Inga will be the world’s largest hydropower scheme and part of a greater vision to develop a power grid across Africa that will spur the continent’s industrial economic development. Up until now, the power of the Inga Falls has been largely unused, with the two existing hydroelectric dams, Inga I and Inga II, operating at a low output of mere a 1,775 MW.

The reasons for the underutilisation of the waterfall’s power has largely been money: The construction of Grand Inga – with completion pegged at 2025 – comes with a whopping price tag of 80 billion dollars. Connecting Inga to a continent-wide electricity grid will cost at least an additional 10 billion dollars. These are not sums South Africa and the DRC are able to bankroll alone.

But help is not far: The globe’s top development financiers, World Bank, African Development Bank (AfDB), European Investment Bank as well as a number of private, foreign energy companies are all keen to contribute large sums to the Inga project. In return, they expect to gain vast economic benefits from this mega-project – and are likely to take away attention from the development needs of Africa’s poor majority.

“Foreign investors are contributing to the construction of the dam to get their share of large quantities of cheap power upon completion of the project,” warned Institute for Democracy in Africa researcher Charlotte Johnson, who is based in South Africa. “This will force the state’s hand … to enter into agreements concerning the final destination and usage of the power generated.”

Despite the development-focused marketing hype surrounding the project, the Congolese government and investors have made no plans to open the grid for public use, said Johnson. Instead, it is marketed as a commercial product. And foreign investors will always be able to pay more, instantly removing the poor from the consumer competition.

“Local power grids are not included in the budget. African communities living in darkness are not the intended beneficiaries of Grand Inga, and the 500 million people who have been promised electricity will remain in the dark,” she added.

For now, the project looks at building only long-distance transmission lines to Africa’s mining and industrial heartlands as well as to urban centres in South Africa, Egypt and even Europe.

According to the AfDB, a Franco-Canadian consortium is in the process of conducting a 15 million dollar study to assess the potential for developing the site in stages.

“This is a major investment, and it won’t be possible to mobilise resources in one go. The final decision will of course be taken by the DRC government,” explained AfDB director of energy, environment and climate change Hela Cheikhrouhou at the development bank’s annual meeting in October.

According to the AfDB, hydropower represents 45 percent of power generation potential in Sub-Saharan Africa, but only four percent has currently been tapped. As a result, only every fifth person has access to electricity in the region.

“To achieve energy access for all, Africa must maximise clean energy options, emphasise energy efficiency and work with developed countries and development institutions to quickly and effectively channel a more substantial share of climate financing,” she added.

With the backing of the world’s major development banks, the DRC and South Africa are forging ahead with their plans to build Grand Inga. After the signing of the agreement, Zuma and Kabila ordered the start of negotiations for a treaty over the next six months, which will put into effect the agreement by detailing time frames and implementation stages for the dam construction.

Once completed, the generated electricity will be managed by the state-owned utility companies of both countries, South Africa’s Eskom and the DRC’s Societe Nationale d’Electricite Societe a Responsibilite Limitee National. From there it will be sold to the highest bidders. Africa’s still unconnected poor will certainly not be among those.