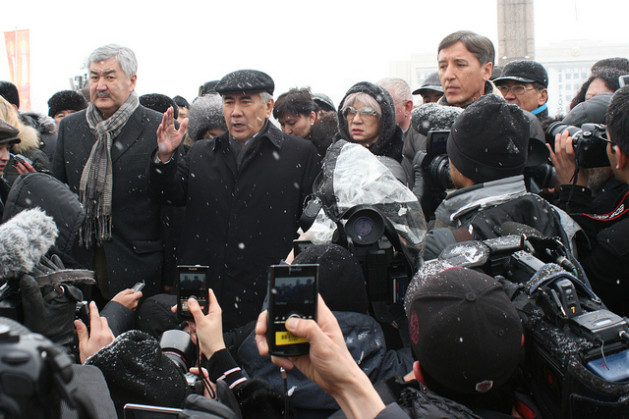 WASHINGTON, Jul 9 2013 (IPS) - Political parties are seen by the publics in most countries as the most corrupt institutions in their societies, according to the latest survey by the anti-corruption watchdog, Transparency International (TI) released Tuesday.

TI’s Global Corruption Barometer, which was based on interviews with more than 114,000 interviews in 107 countries, also found that a majority of respondents (54 percent) believe their governments are either largely or entirely controlled by a few big entities acting in their own self interest.

Slightly more than one in four respondents (27 percent) reported that they had paid a bribe within the previous 12 months in their dealings with public institutions, such as the police or the courts.

But bribery was far more prevalent in some countries than in others. In Australia, Denmark, Finland, and Japan, for example, one percent of respondents reported having paid a bribe to public officials for services in the past year.

Bribery was far more common in poor countries, particularly in Africa. More than six in 10 respondents reported having paid a bribe in Cameroon, Kenya, Liberia, Libya, Mozambique, Sierra Leone, Uganda, and Zimbabwe. Nearly three of four respondents in Yemen also said they paid a bribe to officials at least once during the year.

Most respondents said they believed corruption in their countries had gotten worse over since 2011 when the last edition of the Barometer was produced. The new Barometer, which involved more people in more countries than ever before, is the eighth published since 2003.

On the more positive side, two-thirds of respondents said they believed ordinary people can make a difference in fighting corruption in their countries, although those two-thirds are more likely not have paid a bribe.

Majorities range from 51 percent to 72 percent said they would be willing to take one of more of several specific actions from joining an anti-corruption organisation, to taking part in peaceful protests and signing a petition.

“There is a widespread willingness to get involved through these various means which the anti-corruption movement should make the most of to take the fight against corruption to a larger scale,” according to TI, an non-governmental organisations (NGO) which currently has 90 chapters worldwide.

The new survey comes on a wave of international public attention – and mobilisation – against corruption. Most recently, huge public demonstrations in major Brazilian cities have focused popular anger on the persistence of corruption in that country, while India’s anti-corruption movement in 2011 continues to reverberate there.

From China to Nigeria, farming communities and poor urban dwellers have found themselves being dispossessed of their land by wealthy and politically well-connected interests that have used those connections to the judiciary and the civil service in land grabs.

Meanwhile, the Occupy Wall Street movement in the United States and the popular protests that have broken out in Greece, Spain, and other southern European countries in response to the Eurocrisis have focused attention on the disproportionate power exerted by private corporate and financial interests on governments.

The Barometer has been one of a number of indices, such as the Rule of Law Index published by the World Justice Project (WJP) that address issues of transparency and corruption and that are used by global institutions, including the World Bank, bilateral aid agencies, and private-sector organisations, to assess the risks of investment and doing business in countries.

TI also publishes an annual Corruption Perceptions Index, which last year rated 176 countries based on the assessments of risk analysts, businessmen, and other local and international experts.

The Barometer, by contrast, interviews a random sample of people who live in the nations covered by the survey. This year’s edition covers both more respondents and more countries than ever before.

All respondents were asked to rate on a one-to-five scale (one being “no problem at all”) how serious corruption is a problem for their countries. The average score across all countries was 4.1, although there were wide variations between countries, particularly between wealthy northern countries and the world’s poorest nations.

The services with the next-highest bribery rates dealt primarily with registration services, mostly in regard to land ownership and transfers. TI noted that the highest rates were found in post-conflict societies and countries in transition, such as Afghanistan, Cambodia, Iraq, Liberia, Pakistan, and Sierra Leone – countries which also suffer high levels of hunger and malnutrition.

The next most-common services where bribery was paid included medical treatment (17 percent), and education (16 percent), according to the Barometer.

In addition, the perception that government is controlled by a few big self-dealing entities, rather than by the public, appears to have become particularly widespread, even among the world’s wealthiest countries, according to the Barometer.

While only five percent of Norwegians hold that belief, 83 percent of Greeks, 70 percent of Italians, 66 percent of Spaniards, and 64 percent of U.S. respondents said they believe that their country’s government is run to a “large extent” or “entirely” “…by a few big interests looking out for themselves.”

As for major institutions, political parties were seen as the most corrupt, scoring a global average of 3.8 on a one-to-five scale. The police scored second at 3.7, followed by civil servants, parliament, and the judiciary at 3.6 each. The private sector and medical services each scored 3.3, followed by the education system (3.2), and media (3.1). Those institutions regarded as least corrupt included the military (2.9), NGOs (2.7), and religious institutions (2.6).