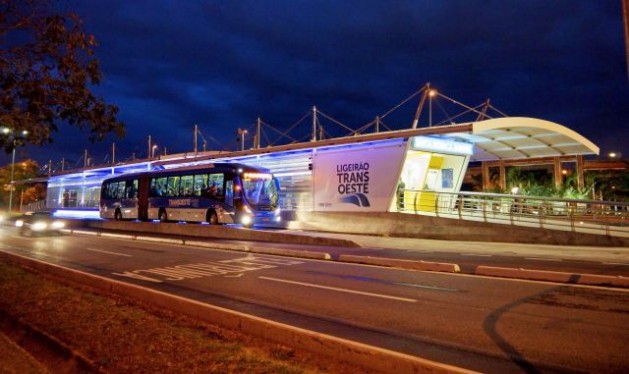 Bus rapid transit lanes like this one in the west of Rio de Janeiro are relatively low cost and easy to implement. Credit: ITDP/Leonardo Miguel Silva Martins

RIO DE JANEIRO, Jul 9 2013 (IPS) - Bus lanes, cycle paths and pedestrian walkways are viable solutions to the transport collapse in Brazil’s big cities. But economic interests, red tape and the lack of strategies for an integrated system are delaying a process that the protests raging across the country for the last few weeks have made an urgent issue.

“Traffic is terrible in Rio de Janeiro; it’s much faster to use my bike, and I get exercise at the same time,” film producer Miriam Gerber, who cycles to and from work, to go shopping or just to go for rides, told IPS.

But traffic and the scarcity of bike paths can often transform a pleasant ride into a hellish experience.

“The traffic is dreadful. Cars drive very close together and they don’t slow down when they see you. A lot of people are hit by cars. Since our bodies are our bumpers, we haven’t got a chance,” said Gerber.

The urban transport policy in this country of over 198 million people has prioritised car use since the 1960s, building more and more freeways and limiting the options for pedestrians and cyclists.

But at the same time, they created the spectre of breakneck growth in the national vehicle fleet.

The number of automobiles in Brazil’s 12 largest cities increased by 890,000 a year between 2001 and 2011, according to the Observatório das Metrópoles, a think tank. Whereas Brazil’s population grew by 11 percent in that decade, annual registration of new vehicles rose by 120 percent, says a report by The Economist, a British newspaper.

“In a collapse like this one, cities lose out heavily in economic, productive, environmental and social terms,” Clarisse Linke, the head of the Brazil office of the Institute for Transportation and Development Policy (ITDP), which works for sustainable and equitable transport worldwide, told IPS.

“Transport is a key question in making cities socially fair and equitable. This whole wave of demonstrations began precisely because of the debate about transport and social justice. Our country is growing economically, but our cities are increasingly unjust,” she said.

Leftwing Brazilian President Dilma Rousseff announced in 2012 that she would prioritise public transport in big cities, with joint investment with state and municipal governments amounting to 16 billion dollars. The plan would include 600 kilometres of roads, 200 kilometres of railway tracks, 381 terminals and the purchase of light rail carriages.

In the same year a law on urban mobility was passed, setting out guidelines for sustainability and the democratisation of public spaces. The law prioritises collective transport and establishes that all cities of over 20,000 people must draw up transport plans covering up to 2015. However, few cities have begun to get organised.

“This problem is deeply rooted in Brazil, as well as in other Latin American countries: there is corruption, bureaucratic machinery that slows things down, and lack of clarity or vision about the role of transportation in the future of these cities,” Linke said.

Orlando dos Santos Júnior, an expert on urban planning at the Observatório das Metrópoles, added further reasons in an interview with IPS.

For instance, in Rio de Janeiro, “big systems are being built (in the city proper) that are not integrated with outlying areas. It is obvious there are going to be negative effects, because it is a misguided and irrational plan that wastes public money, reflecting the subordination of the municipal government to powerful economic interests.”

ITDP supports investment in bus rapid transit (BRT) lanes, which are relatively low cost and have a short lead time.

The southern city of Curitiba pioneered BRT systems, combining high-quality stations, overland bus transport and real- time information systems with dedicated lanes for buses and high-capacity vehicles. The buses are clean and comfortable, and passengers pay their fare before embarking, reducing the wait time for departures from stops, Linke said.

A score of Brazilian cities have plans to build BRT systems. São Paulo has its Expresso Tiradentes, the southern city of Belo Horizonte is building two lanes, and Rio de Janeiro inaugurated one in 2012 and has three more under construction.

However, the needs of the populace were not met, Santos criticised. “What we are seeing is that the large cities are preparing to welcome the 2014 FIFA World Cup and the 2016 Olympic Games,” he said.

ITDP also supports the need for integrating large transport systems like subways or trains with BRT lanes and the promotion of cycling and walking.

Ze Lobo, the head of Transporte Ativo, a local NGO, said bicycles are an immediate solution for transport needs up to distances of five to seven kilometres.

“The more we use them, the quicker the authorities will have to create infrastructure for bicycles,” he told IPS.

Lobo said “the big problem is still the lack of understanding among city engineering departments and other authorities of the importance of bicycles.” In addition to cycle paths, investment is needed on access routes and parking spaces for cycles in train stations.

But the problem is not just transport; it extends to urban planning as well. “People should live and work in the same place, to avoid unnecessary commuting. Increasing multiple use planning permission could bring about a 30 percent decline in average kilometres of car travel per person per day,” said Linke.

Expanding the railway systems is another challenge. According to an industry association report on metropolitan railways, passenger numbers are growing faster than facilities on the network, causing serious overcrowding for the population.

Trains and subways transported nine million passengers a day in 2012, 3.8 percent more than in 2011. This year passenger numbers are forecast to rise by 10 percent, indicating a need for investment over and above existing plans.

In parallel, according to both Linke and Lobo, car use must be actively discouraged, for instance by limiting parking places or restricting vehicle traffic at peak hours.

Otherwise, traffic safety will no longer be a problem for cyclists, Lobo joked. “If nothing is done, in a few years it will be absolutely safe to pedal between cars that are completely stationary, in total gridlock.”