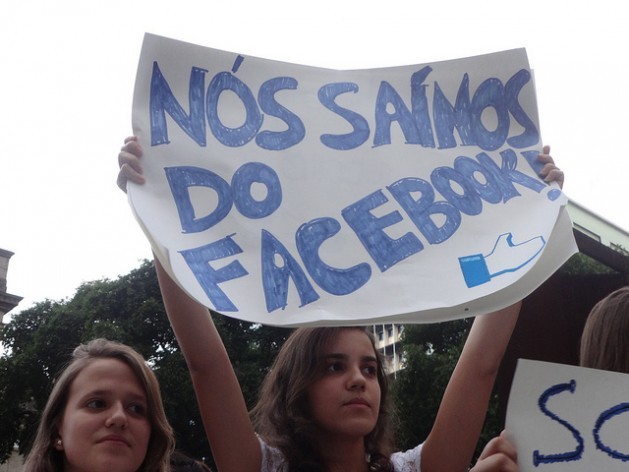 RIO DE JANEIRO, Jun 24 2013 (IPS) - A group of young people touched a nerve in Brazil’s large cities, triggering an outpouring of urban outrage at the deterioration of transportation conditions and of the quality of life.

This is one possible interpretation of the torrent of protests on Thursday Jun. 20, involving close to a million demonstrators in a hundred cities, including Brasilia and nearly all the 26 state capitals. Bus fare increases announced in early June detonated a rebellion by young people, mostly students, which spread to wide sectors of society.

The unrest that has shaken the nation continued all last week and over the weekend to Monday Jun. 24, the day leftwing President Dilma Rousseff planned to meet with delegates of the movement that started the demonstrations. Protest organisers and social media are calling for a general strike on Jul. 1.

The often poor quality of public transport passenger services epitomises what the protesters see as a lack of respect by those responsible for public services for the rights and dignity of Brazilians, who must pay disproportionately high prices for them.

Mario Miranda Gouveia retired at age 61 because he could no longer stand the four to six hour daily commute by bus to cover barely 50 kilometres from Campo Grande, the neighbourhood on the west side of Rio de Janeiro where he has lived for the past 15 years, to his job in the city centre.

Although he wanted to carry on as a mid-level official at the state foundation for fomenting scientific research, Gouveia packed it in two months ago. “It was terrible, I would leave at six in the morning and sometimes I only arrived (at the office) at half past nine,” he said. Added to the length of the journey was the discomfort of travelling standing up, sometimes in buses whose seats had been destroyed by vandals.

A fortnight ago, no one could have predicted that such a specific grievance would trigger spontaneous protests that have spread like wildfire from the south to the north of the country, with demands diversifying from more spending on health and education, the decriminalisation of marihuana, rejection of corruption and protests over the immense costs of preparing for international sports events.

Comparisons were instantly made with the wave of popular uprisings in the Middle East and North Africa known as the Arab Spring, with the “Indignados” movement in Spain and with the protests raging in Turkey since May 28. But the situation in Brazil is very different to the reality of these other countries.

Brazil is a strong democracy, and there is no economic or political crisis. But there are urban problems. Unemployment is only 5.8 percent, in spite of weakened growth, and President Rousseff still enjoys high popularity, although it is declining.

It all began with four marches convened on Jun. 6 by the Movimento Passe Livre (MPL – Free Fare Movement) in São Paulo, four days after the announcement of a bus fare hike from 3.00 to 3.20 reals (1.40 to 1.50 dollars). A few thousand people took part.

Although smaller demonstrations were held in three other state capitals, the epicentre of the protests was São Paulo, where a police crackdown on Thursday Jun. 13 left dozens of protesters, and some journalists, injured by rubber bullets.

The violent clashes contributed to the proliferation of the protests, now driven by solidarity and the defence of the right to peaceful demonstration.

It is about “rights” and not just the extra “cents” in transport fares, said the activists’ placards and declarations, giving rise to enthusiastic ideas about a Brazilian “awakening,” especially among the young who are calling for political changes. The demands are said to be broad and “diffuse.”

But it is unlikely that the protests would have become so widespread without the uncomfortable living conditions in cities.

The generalised discontent also explains the unexpectedly tolerant attitude among local people, even shopkeepers whose business has been affected by the demonstrations, towards the disruption, the vandalism of buildings, banks and vehicles and even the looting practised by small groups.

Traffic congestion has seriously worsened in recent years because car sales have been vigorously promoted with tax breaks and credit facilities, in order to sustain economic growth. At the same time, little has been invested in urban public transport systems.

Josefa Gomes regrets having moved to São Gonçalo, a large city east of the metropolitan region of Rio de Janeiro. It takes her two to three hours every day to get to the residential areas near the centre of Rio where she works as a domestic, and the bus journey to and from work costs her up to 24 reals (11 dollars).

Six years ago, when Gomes left a favela or shanty town to move to her present home, which is larger but farther away, “the commute was much easier,” taking half the time it does now. With no sign of improvement on the transport front, Gomes wants to go back to living in the centre of Rio de Janeiro.

Medium sized cities in the provinces are also experiencing terrible traffic jams, and now have an unprecedented wave of protests on their streets, usually besieging mayors’ offices.

In São Paulo, Brazil’s largest city, average vehicle speed fell last year to 18.5 km per hour during evening rush hour, 10 percent slower than in 2008. On some avenues the average speed is 6.6 km per hour, barely faster than walking pace.

Citizens of São Paulo have reached their highest level of frustration with public transport since Datafolha, a polling firm, began surveys on the subject in 1987. Currently, 55 percent of respondents in the city say it is bad or terrible, compared to 42 percent in 2011. Only 15 percent of them say it is good.

Respondents said buses, which transported 2.9 billion passengers in 2012, were the worst form of passenger transport.

Stadiums and other facilities built or expanded for the FIFA (International Federation of Association Football) Confederations Cup, under way, the FIFA World Cup in 2014 and the 2016 Olympic Games are also a major target of the protests because they are seen as diverting funds needed for education and healthcare, as well as encouraging corruption and exacerbating traffic problems as the construction works block streets and highways.

Although dozens of city governments have reversed the transport fare hikes, the demonstrations have grown and multiplied.