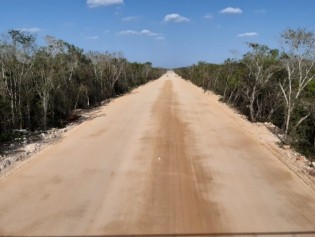 By Iralís Fragiel
When the new locks of the expanded Panama Canal begin operations, they will do so amidst numerous challenges, because of the storm clouds hanging over the global economy, especially China. But local authorities and experts are not worried about the possible impact on the expanded canal.

By Ivet González
When it rains, trucks get stuck in the mud on the poor roads in this rural municipality in eastern Cuba. The local population needs more and better roads to improve their lives and help give a much-needed boost to the country’s farming industry.

By Ivet González
Up and down the streets of towns and cities in Cuba go horse-drawn carriages with black leather tops and large back wheels, alongside more simple carts, operating as public transportation.

By Mario Osava
A group of young people touched a nerve in Brazil’s large cities, triggering an outpouring of urban outrage at the deterioration of transportation conditions and of the quality of life.

By José Adán Silva
A five-century wait could come to an end when the Nicaraguan government grants a concession this year to a Chinese company to build a canal between the Pacific and Atlantic oceans, despite local protests and international scepticism.
Next Page »
ADVERTISEMENT ADVERTISEMENT