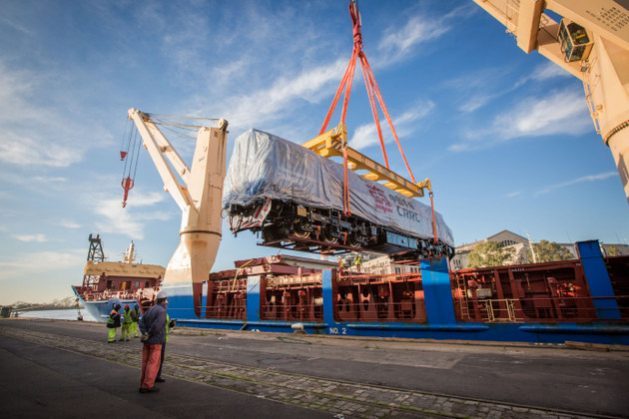 One of the new locomotives, imported from China to modernise Argentina’s freight railway network, being unloaded in the port of Buenos Aires in May. Credit: Ministry of Transport

BUENOS AIRES, Jul 12 2017 (IPS) - Development in Argentina in the second half of the 19th century and the first half of the 20th century was closely tied to that of the railway. The eighth largest country in the world, Argentina’s economy grew through exporting agricultural and livestock products, and the railways were key to founding centres of population and transporting goods to the ports.

“The railways had an enormous social and cultural impact, and often arrived in areas where there was little or no population. Around the middle of the last century there were 48,000 kilometres of track, at which point the railway system was nationalised as Ferrocarriles Argentinos (Argentine Railways), the largest railway company in the world,” historian Eduardo Lazzari told IPS.

But by 1950, decline had set in. Branch lines were closed and the track network was almost halved, in this country with an area of 2.8 million square kilometres and an estimated population of 43.5 million.

This decline is viewed by some Argentines as a cause, by others as a consequence, but nearly all of them see it as symbolic of the fate of the country, which has suffered countless economic crises in recent decades, and where according to official figures one-third of the population lives in poverty.

. “We have to think about what kind of railway we want, because for many years the main problem has not been lack of investment but bad management. It makes no sense to try to go back to the railway system the country once had, because needs have changed." -- Alberto Muller

Argentina now has a recovery plan for the railways, involving investments of billions of dollars and addressing both freight carriage as well as passenger transport in the Buenos Aires metropolitan area, where 15.2 million people live, representing 35 percent of the country’s total population.

There are also plans, on a lower key, to renovate intercity rail links in this, the third largest economy of Latin America.

“In the last few years there have been investments on a scale that I have never seen before, especially in the metropolitan railway network. Some of them have not been particularly well planned,” transport expert Alberto Muller, the head of a research centre at the Faculty of Economic Sciences of the University of Buenos Aires (UBA) told IPS.

Muller voiced the doubts entertained by many experts in the field about the priorities that have been adopted. “We have to think about what kind of railway we want, because for many years the main problem has not been lack of investment but bad management. It makes no sense to try to go back to the railway system the country once had, because needs have changed,” he said.

In 2008 the state began to buy new railway carriages for metropolitan trains, which it had not done since 1985.

The railway sector was privatised in the 1990s as part of the neoliberal reforms undertaken by the government of Carlos Menem (1989-1999).

The visible deterioration in services and infrastructure began to be reversed in recent years, when the state recovered ownership of the majority of branch lines.

But it took a major tragedy to give the railways top political priority and accelerate investments.

On a Wednesday morning in February 2012 a train carrying 1,200 passengers on the Sarmiento line drove into Once, one of the four main stations in Buenos Aires used daily by thousands of suburban commuters. The brakes failed and it crashed into the buffers..

The crash killed 51 people and led to a trial that riveted the nation and sentenced transport officials and private railway company administrators to prison terms.

In their verdict, the judges determined that the accident had been caused by the “deplorable lack of maintenance that affected safety conditions.”

The weight of public opinion led to 1.2 billion dollars being spent by 2015 to modernise the metropolitan railway lines.

In 2016, in the first year of the government of president Mauricio Macri, an investment plan was announced for nearly 14.2 billion dollars up to 2023. The goal is that trains entering and leaving Buenos Aires should have a daily passenger transport capacity of five million people, compared with their current capacity of 1.2 million passengers.

China will contribute four billion dollars to the renewal of more than 1,500 kilometres of track in Belgrano Norte and San Martin, carrying freight from the north and west of the country to the ports of Rosario, on the Parana river, and Buenos Aires, on the Rio de la Plata, to be shipped for export.

The agreement includes the purchase of 3,500 railway carriages and 107 locomotives from China.

“The railroad must play a key role in Argentina’s economic recovery,” Transport Minister Guillermo Dietrich said on May 30 upon receiving 10 of the Chinese locomotives.

As for intercity railways, services between Buenos Aires and the city of Mar del Plata were reinaugurated on July 3. The 400 kilometre journey takes nearly seven hours, giving rise to heavy criticism.

A 60-year-old newsreel video, showing the same journey taking four and a half hours, rapidly went viral on the social networks.

“Argentine society has a nostalgic vision of the railroads, and official policies tend to go along with this, which is a mistake. Intercity trains, for example, have little chance of surviving because this is a very large and relatively underpopulated country, and so the costs are too high,” Jorge Wadell, the co-author of “Historia del Ferrocarril en Argentina” (History of the Railroad in Argentina), told IPS.

One of the most important works in progress is laying the Sarmiento line, which was the scene of the 2012 disaster, underground. This railway line connects the centre of the capital with the west of the conurbation, and practically cuts the City of Buenos Aires in two. At present there are dozens of level crossings that are dangerous and complicate rail traffic.

The project has a budget of three billion dollars and involves digging a 22-kilometre long tunnel with tracks for two trains, one in each direction.

The initiative has been on the drawing board for decades and while many people have called for its completion, some experts have criticised the concept.

“At present there are four tracks on the Sarmiento line, but with the tunnel there will only be two, and all the trains will have to stop at all the stations, so there will be no more fast trains. Nowhere in the world is railway capacity being reduced in this way,” the head of the Instituto Ciudad en Movimiento, Andres Borthagaray, told IPS.

The other major project is the Regional Express Network, consisting of the construction of 20 kilometres of tunnels and a network of underground stations to link the different railway lines arriving in Buenos Aires from the suburbs.