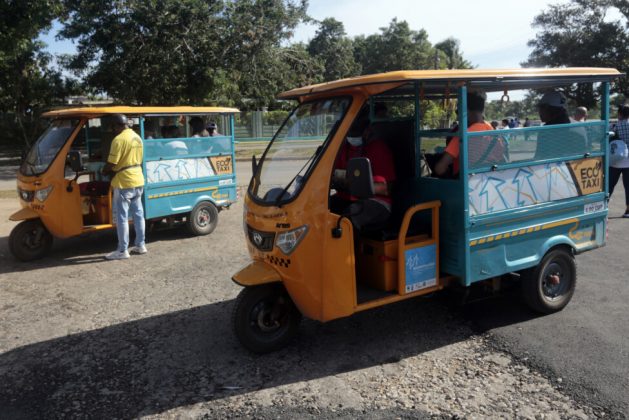 Residents of the Fontanar neighborhood in the Cuban capital are pleased with the incorporation of electric three-wheel vehicles to shorten distances between sectors within Boyeros, one of the municipalities that make up Havana. CREDIT: Jorge Luis Baños/IPS

HAVANA, Oct 17 2022 (IPS) - The incorporation of small electric vehicles for public transport, together with initiatives that encourage the use of bicycles, represent opportunities and challenges for Cuba to sustainably and inclusively combat the chronic problems in urban mobility.

“Connecting nearby places with electric means of transportation has been very timely and a relief,” said Dania Martínez, referring to the well-known Ecotaxis, six-seater vehicles that since June have been providing transportation between neighborhoods within the municipality of Boyeros, one of the 15 that make up Havana.

"Neomovilidad has aimed to strengthen the regulatory framework for an efficient transition to a low-carbon urban transport system in Havana, with a positive environmental impact." -- Reynier Campos

The teacher and her son were waiting for one of these vehicles at the Fontanar shopping center to take them to Wajay, their neighborhood on the outskirts of Havana, when IPS asked them what they thought about the service.

“Public transportation is not good in this area, far from the city center, and private taxis charge you a high fee. Just getting somewhere else five kilometers away can be difficult. Hopefully the three-wheelers will spread to other places,” Martinez said.

She was referring to light motorized vehicles that resemble some kinds of Asian autorickshaws, which are also known locally as motocarro or mototaxi, with a capacity for six people in the back.

With a range of 120 kilometers, these three-wheeled electric vehicles cover three two- to four-kilometer routes for a price of four pesos, or 17 cents at the official exchange rate in a country with an average monthly salary equivalent to about 160 dollars.

The fleet of 25 vehicles is part of the Neomovilidad project, implemented by the General Directorate of Transportation of Havana (DGTH) and the United Nations Development Program (UNDP) office in Cuba.

For its implementation until 2023, it has a budget of 1.9 million dollars donated by the Global Environment Facility (GEF).

“From its start in 2019, Neomovilidad has aimed to strengthen the regulatory framework for an efficient transition to a low-carbon urban transport system in Havana, with a positive environmental impact,” Reynier Campos, director of the project, told IPS.

During the first three months of operation, more than 135,000 people were transported, with an estimated monthly emission reduction potential of 6.12 tons of carbon dioxide equivalent.

On the downside, Ecotaxis can only recharge at night by connecting to the national power grid, 95 percent of which depends on the burning of fossil fuels to generate electricity. Recharging is carried out at the three-wheel vehicles’ parking area and is done at night because it takes about six hours.

However, there are plans to contract power from solar parks of the state-owned electric utility Unión Eléctrica de Cuba, in order to offset consumption, executives said.

Other fleets of Ecotaxis provide service in the municipalities of La Habana Vieja, Centro Habana and Guanabacoa, also with UNDP support, and contribute to the national commitment to climate change mitigation actions.

Campos explained that Neomovilidad is a pilot project in Boyeros that could be extended to other Havana municipalities and cities of this Caribbean island nation of 11.1 million people, where public transportation is one of the most pressing long-term issues. 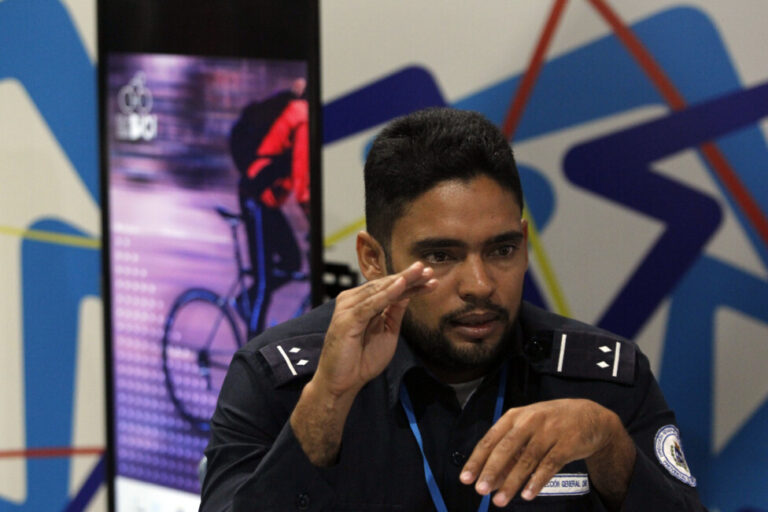 Reynier Campos, head of the Neomovilidad project, stressed that the initiative proposes to strengthen the legislative framework and promote public policies based on four lines that contribute to Sustainable Urban Mobility and help reduce carbon emissions in Cuba. CREDIT: Jorge Luis Baños/IPS

With its 2.2 million residents and tens of thousands of people who live here on a short-term basis, Havana has 1.4 million people using transportation daily, one million of whom use the state-owned bus company Empresa de Ómnibus Urbanos, according to the Ministry of Transportation.

But the most recent official reports acknowledge that less than 50 percent of the fleet of public buses are currently operating in the capital.

The Cuban government blames the U.S. embargo as the main obstacle to the purchase of spare parts, as well as the lack of access to credit to repair and renovate buses, the main form of public transportation.

Problems with the availability of fuel and the number of drivers who find work in sectors with greater economic benefits also undermine an irregular service whose most visible face is the overcrowded stops at peak hours.

Figures indicate that 26 percent of the total estimated passengers in Havana use private taxis, which charge higher rates that not everyone can afford.

There are also non-agricultural transportation cooperatives with cabs and minibuses, as well as buses of the state-owned Transmetro Company, that provide services with set schedules.

Cuba is quietly taking steps to encourage the use of alternative vehicles and increase electricity production from renewable sources, which plans aim to raise from the current five to 37 percent by 2030.

As a result of flexible customs regulations for their importation, as well as assembly, it is estimated that half a million bicycles, motorcycles and electric three-wheelers are in circulation on the island, helping families get around.

However, high prices and sales only in foreign currency hinder their spread. Some of the most economical ones cost over 1,000 dollars, while others range from 2,000 to 5,000 dollars in government stores. 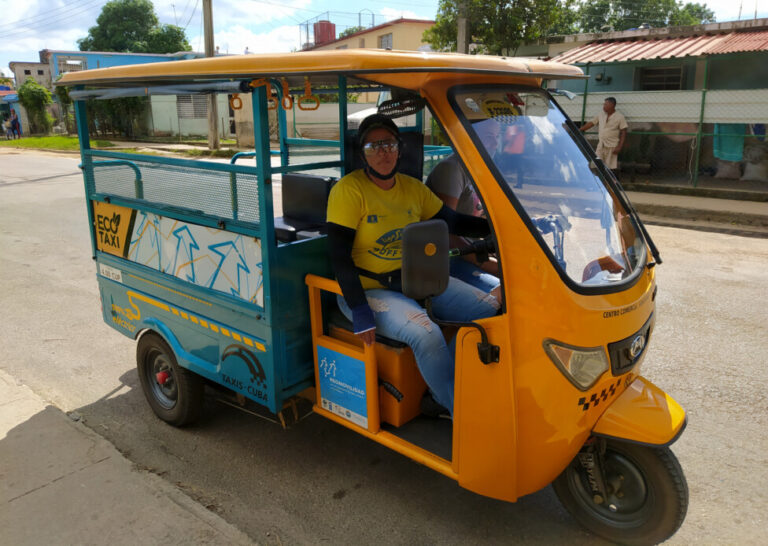 Mirelis Cordovés, driver of one of the electrocycles, makes 11 trips a day on the Fontanar-Wajay route, in the Boyeros municipality of the Cuban capital. She is pleased to have a job and a higher income to support her nine-year-old son, whom she is raising on her own. CREDIT: Jorge Luis Baños/IPS

Neomovilidad stands out for encouraging the incorporation of women as drivers and promoting female employment.

“In addition to giving me a job, my income is higher, helping me support my nine-year-old son,” Mirelis Cordovés, a single mother who is one of the 13 women who now form part of the project’s team of drivers, told IPS.

Latin American nations such as Chile, Colombia, Costa Rica, the Dominican Republic and Panama have adopted national policies related to the development of electric mobility.

In the case of Cuba, the proposal is “a vision for the development of electromobility from the Ministries of Transport, Energy and Mines and Industry, with guidelines and priority lines in public transport, including the conversion of vehicles,” said Campos.

He said that Neomovilidad proposes to promote public policies that contribute to Sustainable Urban Mobility.

The project urges considering the specific mobility needs of each social group and mainstreaming variables such as gender, age and accessibility, in order to reduce gaps.

The National Gender Equality Survey, conducted in 2016 but whose results were released in February 2019, showed that women primarily bear the burden of care work.

They are the ones who spend the most time taking children, family members or other people under their care to schools, hospitals or to buy food, the survey showed.

Transportation was identified as one of the top three problems for Cuban women, second only to low incomes and housing shortages.

The study drew attention to the correlation between time use and income inequality, because cheaper transportation options (public buses) increase travel delays.

Experts consulted by IPS consider that in the case of Cuba, a developing nation shaken by a three-decade economic crisis and pressing financial problems, there is no need to wait for solutions that demand large resources, if small and accessible alternatives can be devised to organize and facilitate mobility. 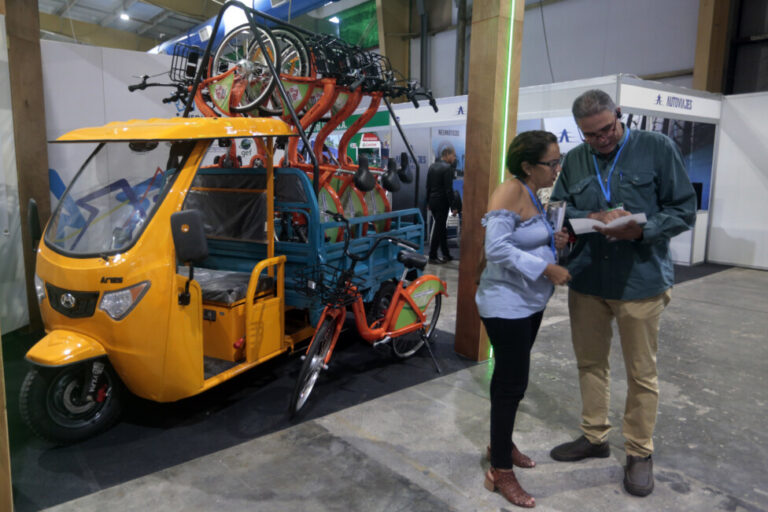 The Neomovilidad stand during the 2022 International Transport Fair at the Pabexpo fairgrounds in Havana. The project includes a pilot system of public bicycles, with six bicycle stations and 300 bikes, which should start offering its services before the end of 2022. CREDIT: Jorge Luis Baños/IPS

As part of Neomovilidad, a pilot system of public bicycles should be inaugurated before the end of 2022, with six stations and 300 bicycles, also in the municipality of Boyeros.

The autonomous venture Inteliforja will operate the bicycle mobility system as a local development project, in conjunction with the DGTH, after winning a bidding process.

“The main activity will be the rental of bicycles at affordable prices. It will include other services such as parking, mechanical workshops, as well as complementary activities such as bicycle touring, package delivery and community activities to encourage the use of this means of transport,” explained Luis Alberto Sarmiento, one of the managers of Inteliforja.

Sarmiento told IPS that the central workshop will be located at the José Antonio Echeverría Technological University of Havana, where there are several engineering and architecture courses.

“We plan to install a solar panel-powered station there to charge students’ motorcycles and electric bicycles,” said the young entrepreneur.

“Farther in the future, when we have more resources, we plan to introduce bicycles or three-wheelers for the transportation of elderly and disabled people,” Sarmiento added.

Although electric mobility and the use of bicycles are seen as promoting more open, safer, cleaner and healthier cities, Cuba faces multiple challenges in this regard, starting with the need to lower the price of vehicles and ensure the stable availability of parts and components.

Other pending issues are the lack of recharging points for refueling outside the home, the lack of bicycle lanes or green lanes, in addition to the urgent need to repair a road network, 75 percent of which is classified as in fair or poor condition.