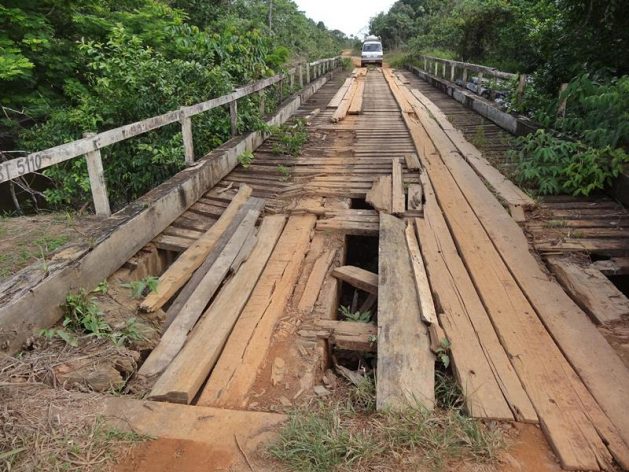 View of a bridge in severe disrepair on the BR-319 highway, in the heart of the Amazon, which the Brazilian government plans to repave along the 405-kilometer central section, out of a total of 885 kilometers, because it has deteriorated to the point that is impassable for much of the year. Those who venture along it take three times the normal amount of time to drive the entire length, with the risk of seriously damaging their vehicles. CREDIT: Tarmo Tamming/Flickr

RIO DE JANEIRO, Aug 9 2022 (IPS) - The mandatory initial permit granted by Brazil’s environmental authority for the repaving of the BR-319 highway, in the heart of the Amazon jungle, intensified the alarm over the possible irreversible destruction of the rainforest.

"Restrictions arose that limited the public hearings to evaluate the studies as early as 2021, and so far there has been no solution to these problems. In addition, the participation of affected populations was limited due to the COVID-19 pandemic and the difficulties in attendance, especially for indigenous people." -- Carlos Durigan

The highway emerged as part of the plans of the 1964-1985 military dictatorship to integrate the Amazon rainforest with the rest of the country, through several highways crossing the then almost unpopulated jungle and the promotion of massive internal migration from other regions.

Due to heavy rains and frequent flooding many sections of the road and a number of bridges have fallen into disrepair. Twelve years after its inauguration in 1976, BR-319 was recognized as a largely impassable road, undermined by neglect.

Local interests tried to repave the road and obtained the support of the central government from the beginning of this century.

However, in 2008 and 2009, the Brazilian Institute of Environment and Renewable Natural Resources (IBAMA) rejected three environmental impact studies, whose approval is essential in Brazil for projects that affect the environment and that have a social impact.

But a fourth study, presented in June 2021 by the National Department of Transport Infrastructure, was approved and the required initial permit was granted by IBAMA, despite criticism from environmentalists.

In recent years IBAMA’s credibility has suffered due to the openly anti-environmental far-right government of Jair Bolsonaro, which weakened the environmental agency by cutting its budget and appointing officials lacking the necessary qualifications. 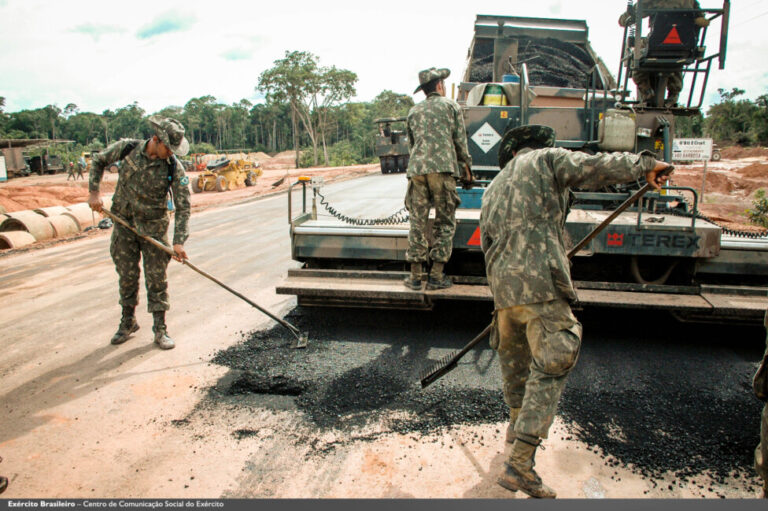 The Brazilian army always deploys members of its engineer brigade to repair roads in remote areas, such as the Amazon rainforest. But in the case of the BR-319 highway between Manaus and Porto Velho, millions of dollars in investments and costly maintenance services are necessary, which prevent its concession to private companies. CREDIT: Brazilian Army

“Restrictions arose that limited the public hearings to evaluate the studies as early as 2021, and so far there has been no solution to these problems. In addition, the participation of affected populations was limited due to the COVID-19 pandemic and the difficulties in attendance, especially for indigenous people,” said environmentalist Carlos Durigan.

The environmental impacts assessed were limited to the vicinity of the road, without considering the entire area of influence of the construction work, the director of WCS Brazil, the national affiliate of the U.S.-based Wildlife Conservation Society, told IPS by telephone from Manaus.

Moreover, no prior and informed consultation was held with the indigenous peoples and traditional communities that will be affected, a requirement under Convention 169 of the International Labor Organization (ILO), he said. This incompliance is likely to lead to lawsuits.

The initial permit was obtained under promises of greater protection, inspection and oversight of protected areas – not very credible at a time of weak public authority in environmental questions, with low budgets and reduced human resources, said Durigan, a geographer from southeastern Brazil who has lived in the Amazon rainforest for two decades.

These and other criticisms form part of the evaluation carried out by the BR-319 Observatory, a coalition of 12 social organizations involved in activities in the road’s area of influence. The 14-point review identifies irregularities in the permit granted by IBAMA and the violated rights of the affected population.

The proponents of the BR-319 highway tried to avoid the requirement of impact studies under the argument that it is only a matter of repaving an existing road, with no new impacts. But the courts recognized it as a complete reconstruction.

But the rains and floods that have occurred since last year have broken down the asphalt on many stretches near Manaus, leaving large cracks and holes. Even without repaving, many people venture to travel along the BR-319 in cars, buses and trucks. But it takes two or three days to drive, and often causes damage to vehicles. 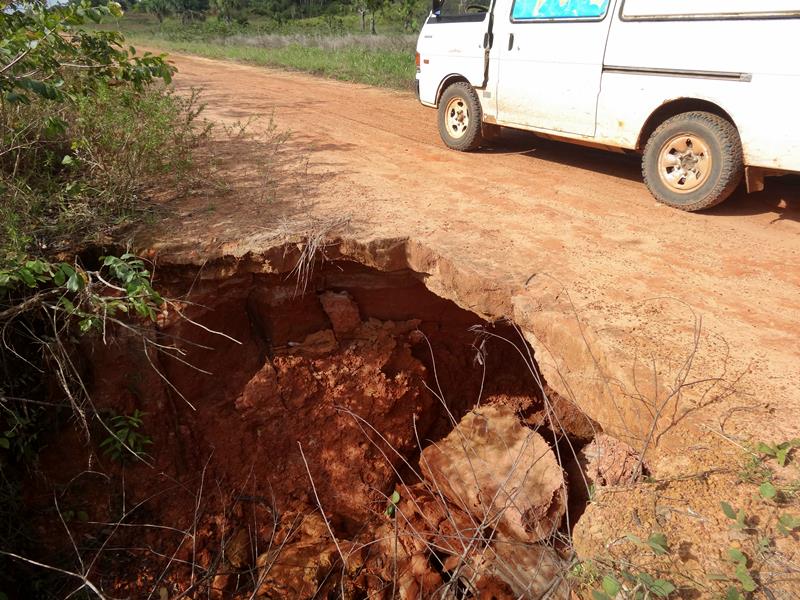 One of the potholes in the BR-319 highway, where the asphalt laid in the 1970s has disappeared. Inaugurated in 1976, the Amazon artery became impassable a decade later and attempts to repave it have so far failed. CREDIT: Tarmo Tamming/Flickr

Environmentalists fear that deforestation, illegal occupation of public lands and the invasion of indigenous lands, which are already occurring along nearly 200 kilometers of the southern section, will spread along the entire highway and its surrounding areas.

This region close to Porto Velho is the area where deforestation in the Amazon has grown the most in recent years.

A usable BR-319 would spread environmental crimes, forest fires and violence generated by land disputes in the middle section of the highway, activists warn.

In fact, 80 percent of Amazon deforestation occurs along the highways that are the arteries leading to the settlement of the rainforest, along with smaller roads branching off from the highways, environmentalists say.

Such effects are already well-known along other Amazonian highways in areas that are more populated and deforested than the territory between Manaus and Porto Velho, bathed by the Madeira and Purus rivers, two of the major tributaries of the Amazon, both of which have their headwaters in Peru. The Madeira basin also extends through much of central and northern Bolivia. 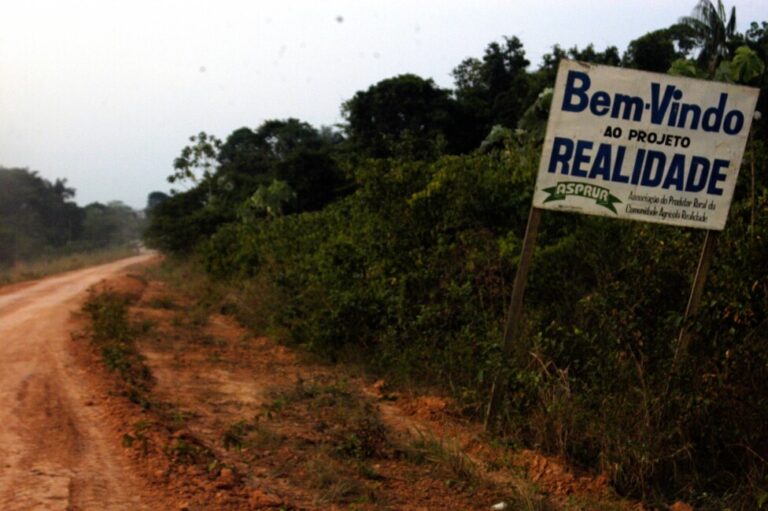 A stretch of the BR-319 highway with an ironic sign pointing to the nearby town of Realidade (Reality). The 885-kilometer road that runs between the Amazonian Madeira and Purus rivers requires high maintenance costs due to frequent flooding, since most of it is located on land that floods in the rainy season. CREDIT: Alberto César Araújo/Amazonia Real

BR-319 faces another uncertainty, which is economic viability. It crosses what is at least for now a sparsely populated area, except for Manaus. The cost of repaving is not small, as the effort includes many bridges and earthworks to stabilize land that floods during the rainy season along many stretches, even though the road is located on higher ground between the Madeira and Purus rivers.

The highway also needs continuous upkeep, as is already the case in the stretch near Manaus, where the necessary repairs have not yet been completed after flooding caused by heavy rains that lasted from October 2021 until well into this year, Durigan pointed out.

Even so, the demand for the repaving of the central section of the highway is very popular, enjoying almost consensus support, the activist acknowledged. The argument in favor of the road is that Manaus is isolated by land, and depends on air or river transport to connect with the rest of Brazil and to be able to export its industrial production.

Since the 1960s, Manaus has had an industrial park and a free trade zone, supported by large subsidies that are regularly extended and will remain in force at least until 2073. These benefits shore up the electronics, motorcycle and beverage industries in the city, despite its remote location and distance from the main domestic markets.

In addition to a reduction in the city’s isolation, the population of Manaus hopes to see a drop in food prices, thanks to a workable road that would allow better access to products from Rondônia, an Amazonian state where agriculture and cattle raising have been developed.

But the beneficial effect of agriculture 900 kilometers away is doubtful. Other Amazonian cities, such as Belém, capital of the eastern Amazon jungle state of Pará, also pay dearly for their food, particularly fresh produce, because they have not developed horticulture.

Along with the repaving of BR-319, Brazil’s Amazon rainforest faces other threats from infrastructure projects.

Another resurrected plan is a road through a conserved forest area on the border between Brazil and Peru. It would cross the biodiversity-rich Serra do Divisor National Park.

This plan also looks unfeasible because of its questionable economic viability and due to the severe environmental restrictions it would face.

Three railways are also planned for exports from Mato Grosso, the southeastern Amazonian state that is Brazil’s largest producer of soybeans, corn and cotton, and small and medium-sized hydroelectric plants are projected, especially in the states of Rondônia and Roraima, the latter on the border with Venezuela.

In addition to resistance from environmentalists and indigenous peoples, these projects now face a new stumbling block, or a new counter-argument: climate change, said Sergio Guimarães, coordinator of the Infrastructure Working Group, a network of 47 social organizations.

This is a variable that requires at least a review of all these projects, he told IPS by telephone from Cuiabá, capital of Mato Grosso.