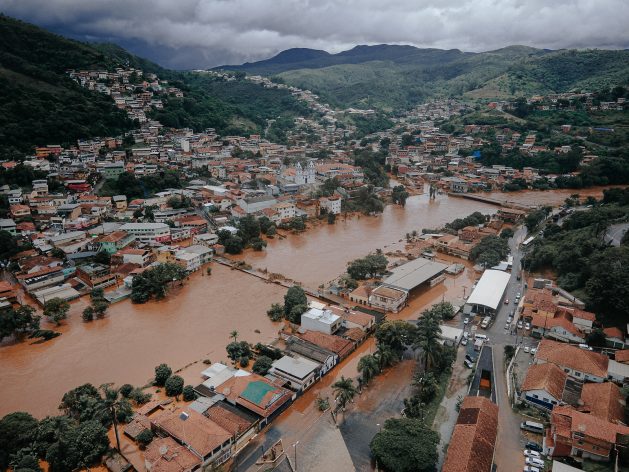 In Raposos, a Brazilian city of 16,500 inhabitants, two-thirds of the homes were flooded by the rising waters of the Das Velhas River. The city grew on both banks of the river, between hills, which led to recurrent flooding. CREDIT: Das Velas River CBH

RIO DE JANEIRO, Feb 2 2022 (IPS) - People living in Jardim Pantanal, a low-income neighborhood on the east side of the Brazilian megalopolis of São Paulo, suffer floods every southern hemisphere summer. Many residents remember the three months their streets and homes were under water in late 2009 and early 2010.

The community is an extreme case of irregular occupation of land on a low bank of the Tietê River, which crosses the southern city. But it is a “structured neighborhood, with brick houses, some of which are two stories tall” to enable residents to avoid the water, said Igor Pantoja, mobilization advisor of Rede Nossa São Paulo, a social organization working for “a just and sustainable city”.

Flooding also occurs in other poor and not-so-poor neighborhoods in São Paulo and other Brazilian metropolises.

In January torrential rains hit the outskirts of Belo Horizonte, capital of the southern state of Minas Gerais, where multiple floods especially affected the cities in the upper reaches of the basin of the Das Velhas River, the source of the region’s water.

In one of the most affected cities, Raposos, two-thirds of the 16,500 inhabitants had to leave their homes when the river rose more than 2.5 meters in the second week of January. At least 12 people died as a result of the rains in outlying neighborhoods.

“When the cities expanded the rivers and streams were ignored, and were only used as a place to dump waste and sewage. Flood-prone areas were occupied, settled by the poor, pressured by economic necessity, and the rich, (fleeing the city) because of their fears,” said Ronald Guerra, a member of the Das Velhas River Basin Committee (CBH).

Guerra, a rural tourism entrepreneur in the town of São Bartolomeu, in the historic municipality of Ouro Preto, listed deforestation, unregulated urbanization and mining as the major factors in the degradation of the watershed and sedimentation of the rivers, which especially threaten the downstream population.

Mining tailings dams pose a particularly serious risk for the basin that supplies water to 60 percent of the six million inhabitants of neighborhoods on the outskirts of São Paulo.

Three years ago one of the dams burst in a neighboring municipality, Brumadinho, leaving 264 dead and six missing, as well as silting and poisoning another river, the Paraopebas.

“Floods and landslides are not the fault of the river itself. There was human action that resulted in the elimination of vegetation and the occupation of slopes,” Guerra told IPS by telephone from São Bartolomeu. 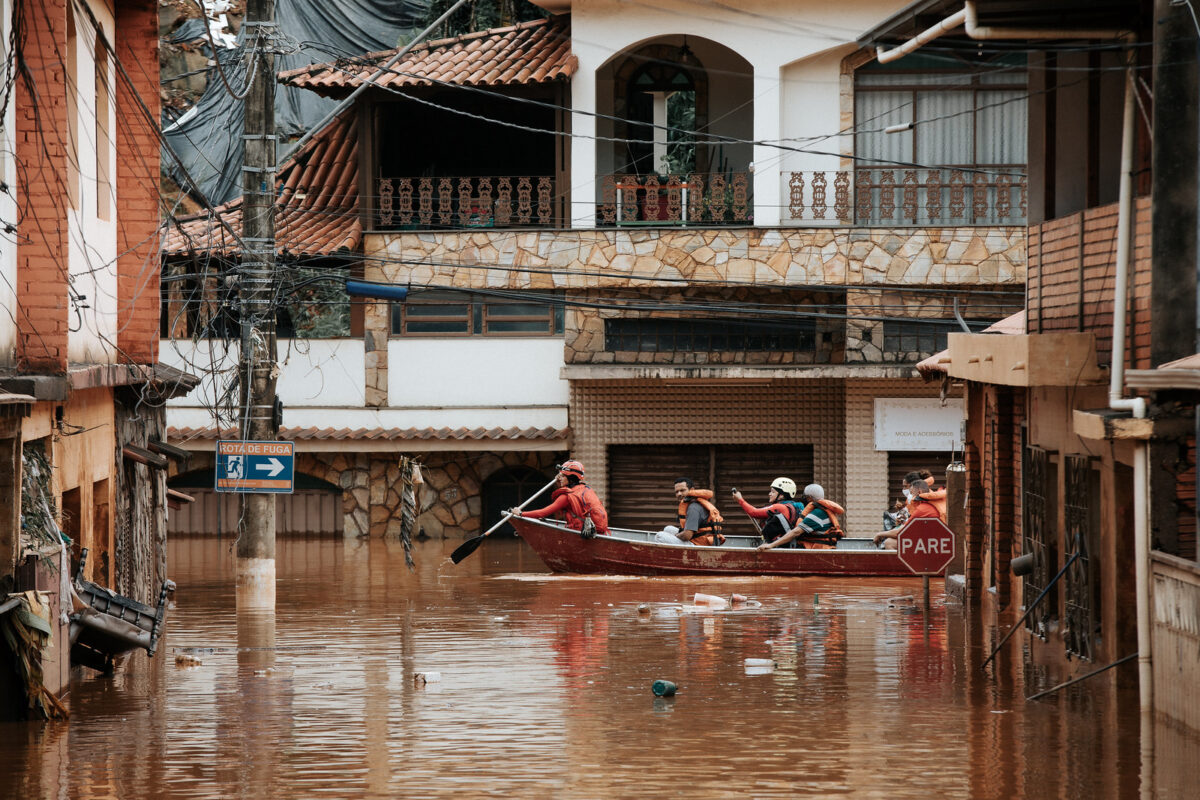 The streets were transformed into veritable rivers during days of heavy rains in the Brazilian city of Raposos, in the upper part of the Das Velhas River basin, 30 kilometers upstream from Belo Horizonte, capital of the state of Minas Gerais, with a population of 2.5 million. CREDIT: Das Velhas River CBH

Putting pressure on the government

“The State failed to play its role as regulator of land occupation, it let people occupy the banks of the rivers, without implementing a serious housing policy,” said Marcus Vinicius Polignano, secretary of the Das Velhas River CBH. “Today we have a chaotic situation that is entrenched. The great challenge is how to rebuild the cities.”

“We have to seek 21st century solutions that take the climate crisis into consideration, and we have to avoid repeating the mistakes of the past as we are doing,” he said in a telephone interview with IPS from Belo Horizonte.

The Das Velhas River CBH and other social movements successfully pushed for inclusion in the new Belo Horizonte Master Plan, in force since February 2020, of the directive that watercourses will no longer be channeled and that the valley bottoms will be cared for, to avoid new “scheduled floods,” the activist celebrated.

“Respecting natural infrastructure, seeking harmony with nature, allowing rivers to flow, not committing the stupidity of boxing them in could be a good route to take,” he said.

The Basin Committee mobilizes the local population, seeks to “change mentalities” and pressures decision-makers to adopt more adequate water policies. “We also propose better alternatives” to avoid new disasters, said Polignano, a physician with a master’s degree in epidemiology and a doctorate in social pediatrics.

It did not rain an exceptional amount in January, according to the expert, who said the problem was that the rainfall of an entire month fell in just 10 days. However, the damage caused by repeated urban floods can be mitigated by “open-minded” management, he argued. 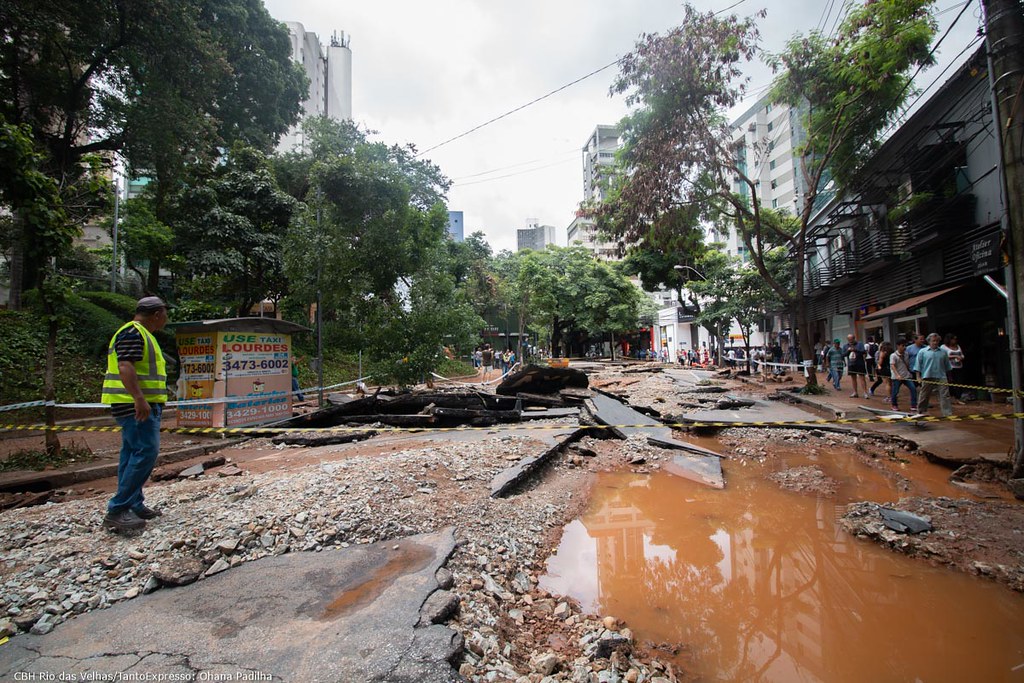 In Belo Horizonte, capital of the southern Brazilian state of Minas Gerais, home to 2.5 million people, torrential rains in January 2022 destroyed streets and flooded some neighborhoods, in a repeat of disasters that are becoming more frequent every year. CREDIT: Das Velhas River CBH

Creating a “rain garden” with diversified plants in a limited area to retain and infiltrate water is one aspect of her proposal that has recently drawn attention.

However, “it’s not only that, but everything that absorbs rain and promotes biodiversity, without which there is no soil to infiltrate and replenish the water table,” Herzog said in an interview with IPS by telephone from Lisbon, where she is currently based.

“Renaturalize,” or bring nature back to the cities, is her slogan. Parks of all sizes, small or large gardens; we must “turn gray infrastructure into green,” she said.

This requires “a systemic view,” understanding the city as a large complex system in which things have multiple effects and functions.

But she does not ignore the hurdles: “real estate interests, politicians keen on getting votes, the automobile industry that wants asphalt and waterproofing, together with the oil industry.”

Cities are not prepared for torrential rains and will require time to adapt to the climate crisis, she said. 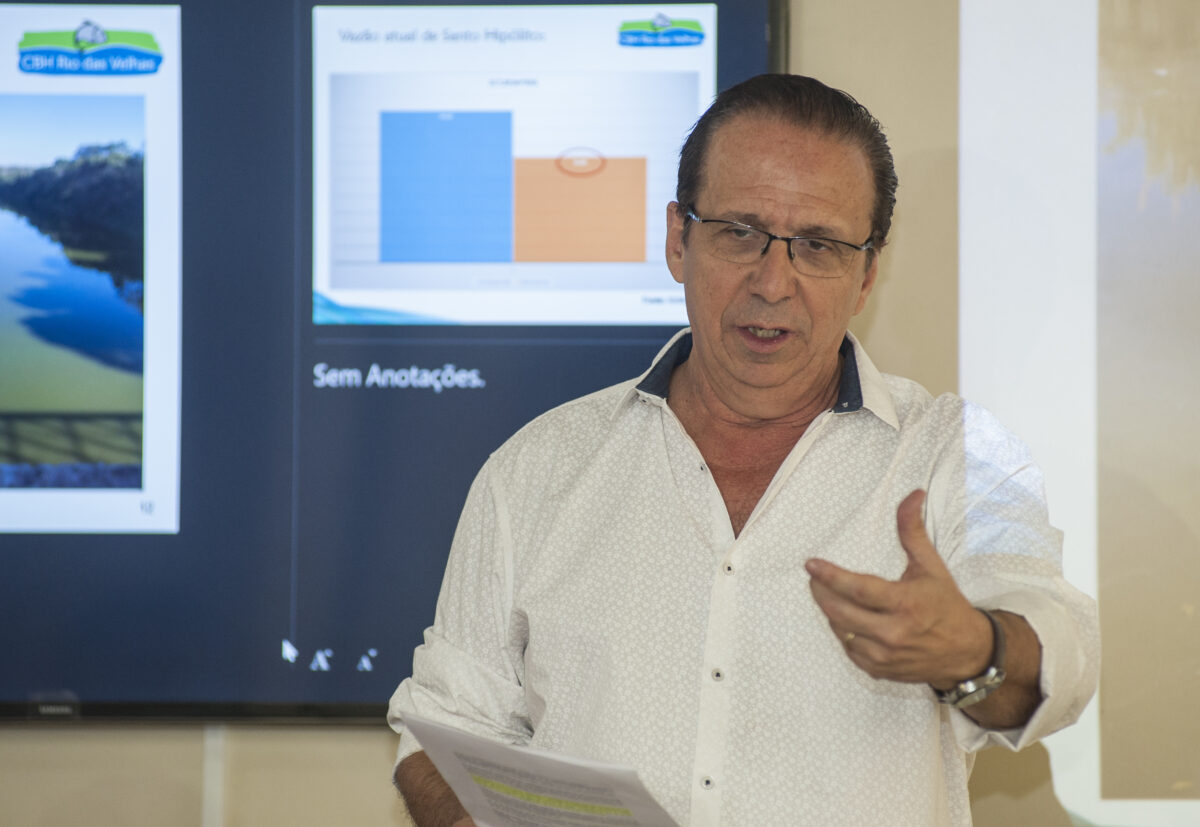 Building the city by destroying nature results in chaotic floods when it rains with any intensity, as happens almost every year in the Metropolitan Region of Belo Horizonte, warned Marcus Vinicius Polignano, secretary of the Das Velhas River Basin Committee, which supplies water to most of the local inhabitants. CREDIT: Das Velhas River CBH

Brazil had 8.26 million people at risk of landslides and floods in 825 municipalities, according to a study by the National Center for Natural Disaster Monitoring and Alerts (Cemaden), of the Ministry of Science and Technology, based on data from the 2010 census conducted by the Brazilian Institute of Geography and Statistics.

Cemaden was created in February 2011 after landslides caused by heavy rains in towns in the hills near Rio de Janeiro left 947 people dead and nearly 300 missing, according to the Center.

In fact, the data indicate that 4.3 percent of the Brazilian population at that time faced a threat of flooding. If this proportion remains steady, 9.2 million people out of a current population of 214 million are now at risk, although there may have been an increase, given that there are now more extreme events.

The two metropolitan regions whose undulating topography tends to increase the danger, those of São Paulo and Belo Horizonte, show a higher proportion of people at risk in the study: 7.3 percent and 16.4 percent, respectively.

The Territorial Risk Areas Base (Bater) methodology is “robust and makes it possible to update the data” when a new census is carried out in Brazil, which should occur in the second half of 2022, after it was postponed in 2020 and 2021, said Regina Alvalá, deputy director of Cemaden and coordinator of the study.

“Torrential rains do not have repercussions if they fall in uninhabited areas, but rather because of their social impact,” which is why the risks are growing, given global warming, more frequent extreme events and the concentration of the population in large cities, the cartographic engineer with a doctorate in meteorology told IPS by telephone from the southern city of São José dos Campos, where Cemaden is based.