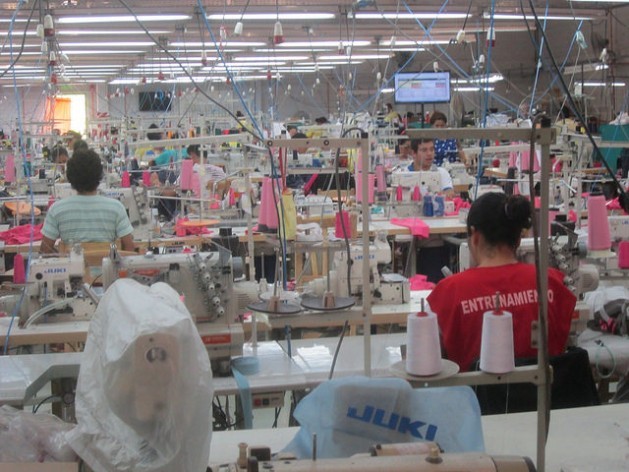 Texcin, the garment plant built by Brazilian company Riachuelo near the airport in Asunción, under Paraguay’s maquila law, which offers tax exemptions and other incentives for export-oriented production. In the foreground a garment worker in training (“entrenamiento”). Credit: Mario Osava/IPS

ASUNCION, Apr 16 2016 (IPS) - “There were cases of people who stopped coming to work after receiving their first wages and then came back a few days later to ask if there was more work,” because they were used to casual work in the informal economy, said Ivonne Ginard.

Ginard, a human resources manager in the textile firm Texcin, was in charge of hiring the plant’s 353 employees and helping them make the transition from informal labour to working in a factory with set schedules, uniforms, safety measures and medical certificates to justify absences.

Texcin, a garment factory near the Asunción airport, is emblematic of the incipient industrialisation process in Paraguay, which is still an agriculture-based economy, where soy and beef are the main exports and informal employment is predominant in the cities.

The plant is a joint venture between members of the Paraguayan business community and Riachuelo, one of the biggest clothing brands in Brazil, where it has 285 stores and two industrial plants. Riachuelo decided to take advantage of the incentives provided by the law on maquila export plants, in effect in Paraguay since 2000, to produce clothing in this neighbouring South American country instead of importing from Asia.

The aim is to increase the number of workers twofold by the end of 2016 and to continue to expand, since the company has the space to build a new plant.

“Our production is competitive with costs similar to those of Asia, with a big advantage in terms of time: it takes 90 days for products to be shipped from China to Brazil, while ours get to (the Brazilian city of) São Paulo in 72 hours, by truck,” he said.

“Under the maquila regime, 108 companies set up shop in Paraguay, 62 of them in the last two years, and 80 percent of them come from Brazil,” the director of the maquila sector in the Ministry of Industry and Trade, Ernesto Paredes, told IPS.

Maquila or maquiladora plants are built by foreign corporations, generally in free trade zones. They import materials and equipment duty-free for assembly or manufacturing for re-export, and enjoy other tax breaks and incentives, as well as more flexible labour conditions. 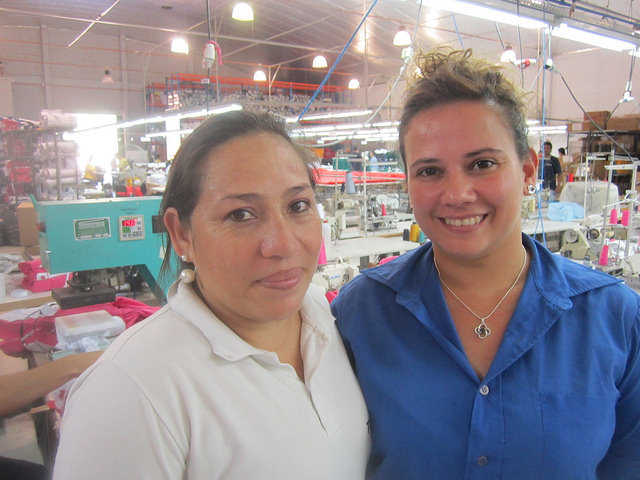 Texcin human resources manager Ivonne Ginard (right), next to the woman who trains the garment workers, Rosa Prieto. “Texcin changed my life,” said Prieto, who was a self-employed seamstress in the informal sector of the economy for 15 years, before she was hired by the company in January 2015. Credit: Mario Osava/IPS

“The maquiladora industry is dynamic, but it does not accept trade union freedom, it does not allow unions to be organised in its factories, which violates constitutional rights,” the president of the Confederation of the Working Class (CCT) labour federation, Julio López, told IPS.

Auto parts factories are predominant in the industry, in terms of both revenue and jobs generated by maquiladoras in Paraguay, Paredes said. He said the sector uses the “just-in-time” delivery system developed by Japan’s auto industry, which is an inventory strategy employed to boost efficiency and reduce waste by receiving goods only as they are needed in the production process, which cuts inventory costs.

The Japanese company Yasaki and Germany’s Leoni have recently set up plants in Paraguay, employing thousands of people, nearly all of them women, in the production of electrical car cables.

And Paraguay now has its first car assembly plant. A national company, Reimplex, began to assemble J2 cars for Chinese auto maker JAC Motors on the outskirts of Asunción on Mar. 28.

In addition, the plastics industry is expanding fast in the eastern department of Alto Paraná, on the border with Brazil, Paredes said.

Cheap local labour, which he said is “low-cost not so much because of the wages paid, but due to the low social charges” and low taxes, are especially attractive for Brazilian companies. To that is added the cost of electricity, which is 63 percent cheaper than in Brazil, according to the head of the maquila sector.

One limitation is transport and energy infrastructure. “Roads, ports, highways, real estate – all of this is lacking, although Paraguay has been investing heavily in airports, hotels, and office buildings,” he said.

One solution would be to widen the two-lane highway between Asunción and Ciudad del Este, the country’s two main economic hubs. However, the plan is not to expand the existing road, but “to build a second highway exclusively for trucks and trade,” as well as a second bridge to Brazil, said Paredes. 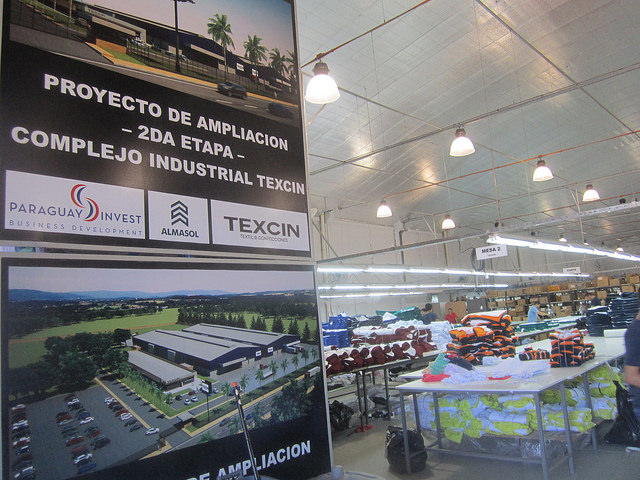 Texcin’s textile warehouse seen behind a sign announcing the expansion of the plant which was built by Brazilian company Riachuelo with partners in Paraguay on the outskirts of Asunción. Credit: Mario Osava/IPS

Investment is also needed in another route for the transportation of heavy loads, the Paraguay-Paraná waterway, used to export soy.

“Better signalisation would double its capacity and speed up river traffic,” Gustavo Rojas, a researcher at the Center for Economic Analysis and Dissemination in Paraguay (CADEP), told IPS.

This land-locked country of 6.8 million people has the world’s third-largest river barge fleet, as well as shipyards that build them, which favours an increase in river traffic, Paredes said.

Electricity is, potentially, Paraguay’s biggest comparative advantage, since the country owns half of the energy from two huge hydropower dams: Itaipú, shared with Brazil, and Yacyretá, on the border with Argentina, with the capacity to produce 14,000 and 3,200 MW, respectively.

But it only began to use part of that energy when a power line from Itaipú to Villa Hayes, near Asunción, was completed in October 2013. The power line was financed by a Brazilian fund aimed at narrowing the development gap between countries in the Southern Common Market (Mercosur) trade bloc, made up of Argentina, Brazil, Paraguay, Uruguay and Venezuela.

Without an adequate distribution network, however, the new energy supply did not eliminate problems like the February blackout that left 300,000 homes without power in Greater Asunción.

Achieving a more secure energy supply “is a question of time,” said Guynn, who tried to place his company near the new power line.

The problem is that the national power utility, ANDE, does not have investment capacity, and “distribution is not secure and steady,” said Fernando Masi, founding director of CADEP, which carries out research on public policies and provides graduate studies in economy.

But the broad availability of energy is a new element drawing industries to Paraguay, since the other advantages, such as low labour costs and tax incentives, already existed before.

Cheap energy also tempted the British-Australian multinational metals and mining corporation Rio Tinto, which studied the possibility of producing aluminum in Paraguay, even if it had to ship in the raw material, bauxite, from far away, because electric power is the main cost of the aluminum industry.

But a major public campaign, which collected more than 100,000 signatures, managed to block the project, “which would consume more energy than all of the national industries combined,” while requiring subsidies and employing a relatively small number of people, Mercedes Canese, an engineer who was deputy minister of industry during the government of Fernando Lugo (2008-2012), told IPS.

However, another engineer, Francisco Scorza, who studied the case, said the Rio Tinto project became unviable because “China began to produce very cheap aluminum, at 1,200 dollars a ton, 40 percent less expensive than here, and Paraguay can’t afford to subsidise energy.”

CADEP’s Masi said attracting small and medium-sized industries is better for development and employment, but the maquila sector has limits. The auto parts industry, for example, is limited to producing wiring, “because there is no bilateral agreement with Brazil on the car industry,” he said.

Brazil demands that Paraguay stop imports of used automobiles, “a very high cost for Paraguay to pay,” as it has a large fleet of used Japanese vehicles known as the “Vía Chile” cars because they come into Paraguay through that neighbouring country.

The maquila industry only exported 284 million dollars worth of goods in 2015 – very little in comparison to Paraguay’s overall industrial exports of 3.0 to 3.5 billion dollars, said Masi.

Industrialisation in Paraguay “has taken off, but not at the fast pace that was expected,” he said, adding that improving energy and logistics infrastructure could help.