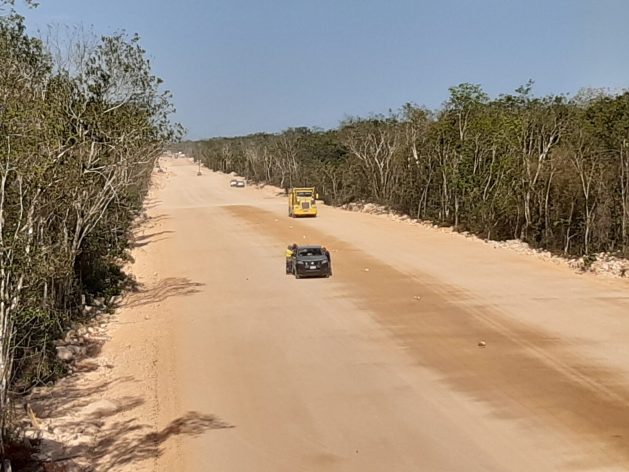 In the photo, people in several vehicles inspect a section of the Mayan Train, the flagship megaproject of Mexican President Andrés Manuel López Obrador, near the city of Valladolid, in the southeastern Yucatán peninsula, seat of the second most fragile jungle massif in Latin America, after the Amazon rainforest. CREDIT: Emilio Godoy/IPS

PLAYA DEL CARMEN, Mexico , Apr 8 2022 (IPS) - Along the wide slash of white earth in southwestern Mexico there are no longer trees or animals. In their place, orange signs with white stripes warn visitors: “Heavy machinery in motion,” “No unauthorized personnel allowed”.

Five tractors spread over the terrain, like intimidating metallic guards with sharp teeth. Two blue portable toilets keep them mute company, two white cans overflow with garbage, and a white and solitary awning attempts to protect them from the punishing sun.

The metal teeth tear up the jungle carpet on land in the Río Secreto ejido – an area of communal land used for agriculture – south of the city of Playa del Carmen. With a population of 305,000, Playa del Carmen is the seat of the municipality of Solidaridad, in the southeastern state of Quintana Roo, some 1,600 kilometers from Mexico City, on the Yucatán peninsula.

The new 90-meter gap in the jungle opens the way for the 120-kilometer southern route of Section 5 of the Mayan Train (TM), the most ambitious megaproject of the government of President Andrés Manuel López Obrador, who wants at all costs for the locomotives to blow their horns by late 2023.

"Hundreds of hectares are being deforested. We are going to end up with new cities or existing ones are going to grow. This could be a tragedy of enormous proportions, because the ecosystems are being disturbed. Simply by removing vegetation cover, the capacity of water systems to capture and filter water is altered.” -- Lorenzo Álvarez

Mina Moreno, an independent environmental conservationist, describes Section 5, one of the seven sections of the project, as “illegal and opaque”.

“There are no studies, there is no information as to why the route was changed, what is behind the new route. The problem is what the railway will bring with it: it’s a Trojan horse for what is coming behind,” she told IPS.

The project, under the responsibility of the government’s National Tourism Development Fund (Fonatur), has suffered delays and cost overruns since construction began in 2020 and will have environmental, social, cultural and labor impacts, as IPS saw during a tour of several areas along the route.

With seven sections running through the Yucatan peninsula and part of the southeast, the plan is for the Mayan Train, with 21 stations and 14 stops, to cover a distance of some 1,500 kilometers. The railroad will pass through 78 municipalities in the southern and southeastern states of the country: Campeche, Quintana Roo, Yucatán, Chiapas and Tabasco, which are home to a combined total of more than 13 million people.

The first three are located in the Yucatan Peninsula, which has one of the most important and fragile Mexican ecosystems and the second largest jungle massif in Latin America, after the Amazon rainforest.

It is here that around 80 percent of the TM railway will run, whose locomotives will pull wagons carrying thousands of tourists and cargo, such as transgenic soybeans, palm oil and pork, the main agricultural products from the peninsula.

The Mexican government is promoting the president’s flagship megaproject as an engine of social development that is to create jobs, boost tourism beyond the traditional attractions and bolster the regional economy. But these arguments have sparked conflicts between its supporters and critics.

UN Habitat, which is providing technical advice on the project’s land use planning, believes that the railway will create one million jobs by 2030 and will lift 1.1 million people out of poverty in an area with 42 municipalities with high rates of poverty and marginalization. (The estimates were made prior to the COVID-19 epidemic that hit Latin America’s second-largest economy hard.) 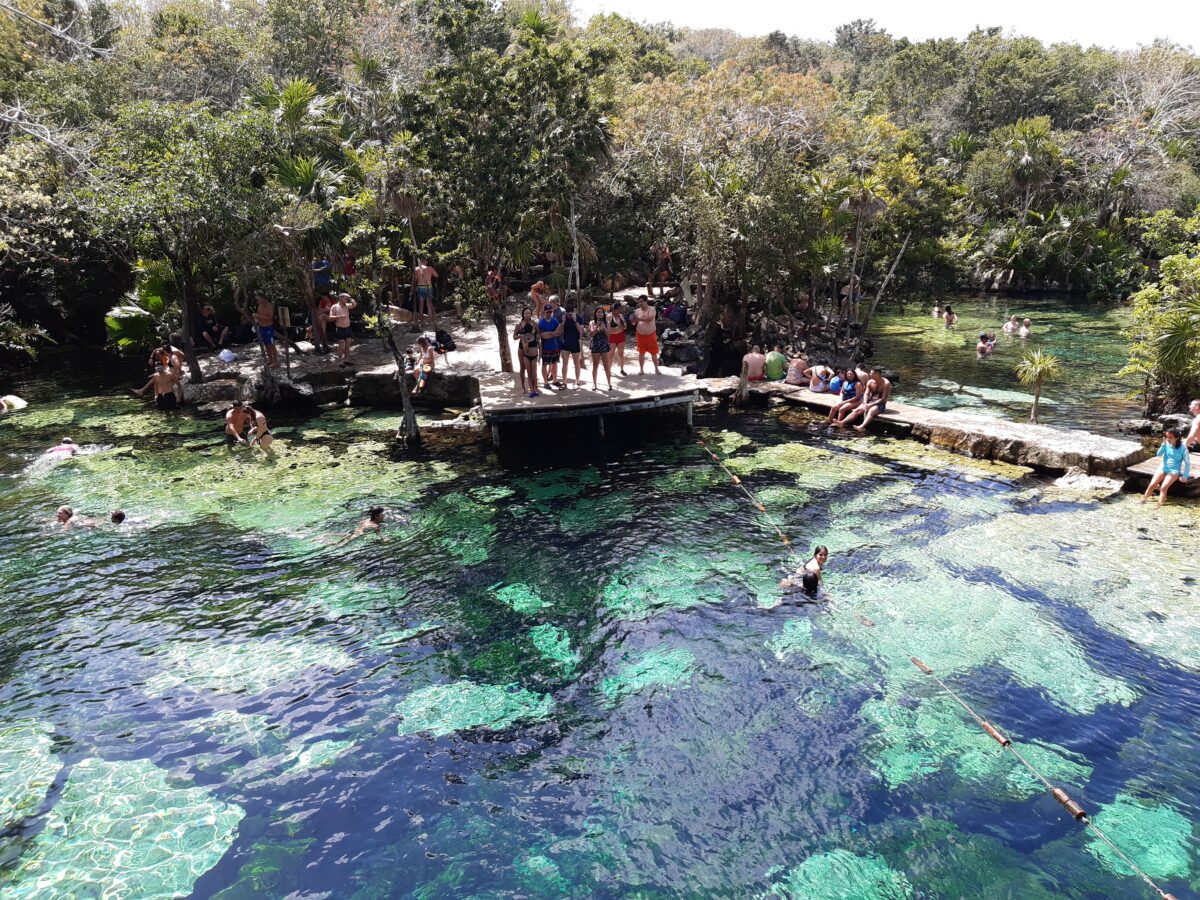 The Mayan Train, which will run 1,500 kilometers through five states in southern and southeastern Mexico, threatens ecosystems and tourist attractions, such as subterranean caves and cenotes. The photo shows tourists swimming in the cenote Azul, on the outskirts of Playa del Carmen, in the southeastern state of Quintana Roo on the Yucatan Peninsula. CREDIT: Emilio Godoy/IPS

The TM, built with public funds, requires 1,681 hectares of land, which implies the cutting of 300,000 trees, according to the original environmental impact study. The construction of the first three sections, which require 801 hectares, began without environmental permits.

The western route is causing social, cultural and land-ownership conflicts, while the eastern route will cause greater environmental damage.

López Obrador denies that the railway will lead to deforestation, and promised the creation of three natural parks in eastern Quintana Roo and the reforestation of some 2,500 hectares.

But available information shows that the megaproject is moving ahead with construction while leaving environmental management plans behind.

This is seen in a close look at the 2020 public accounts of the Chief Audit Office of Mexico – the comptroller of the public treasury – on the budget and execution of the TM. The office concluded that the project lacks a master plan and the necessary resources to guarantee sustainable development and environmental protection.

It also documented an increase in cost from 7.3 billion dollars in 2019 to 8.8 billion the following year, and found that there was no explanation for the expenditure of about 13 million dollars.

Moreover, the megaproject only advanced one-fifth of what was planned in 2019 and 2020, a bad omen for the president’s plans, although the rate of progress in 2021 and the first quarter of 2022 is not known.

But it is clear that Fonatur decided to step on the accelerator to fulfill the president’s promise and that the last two sections may be built with the participation of the army in the middle of the jungle. It is also clear that López Obrador does not want to inaugurate the TM until the entire line is completed.

The Federal Prosecutor’s Office for Environmental Protection (PROFEPA) did not inspect the works in 2020, nor has it done so for section 5, as stated in a request for access to public information filed by IPS.

The porous karst soil of the peninsula has sabotaged the government’s plans and deadlines, as it has forced Fonatur to change the design several times. For example, section 5 underwent three modifications from January 2021 to January 2022. 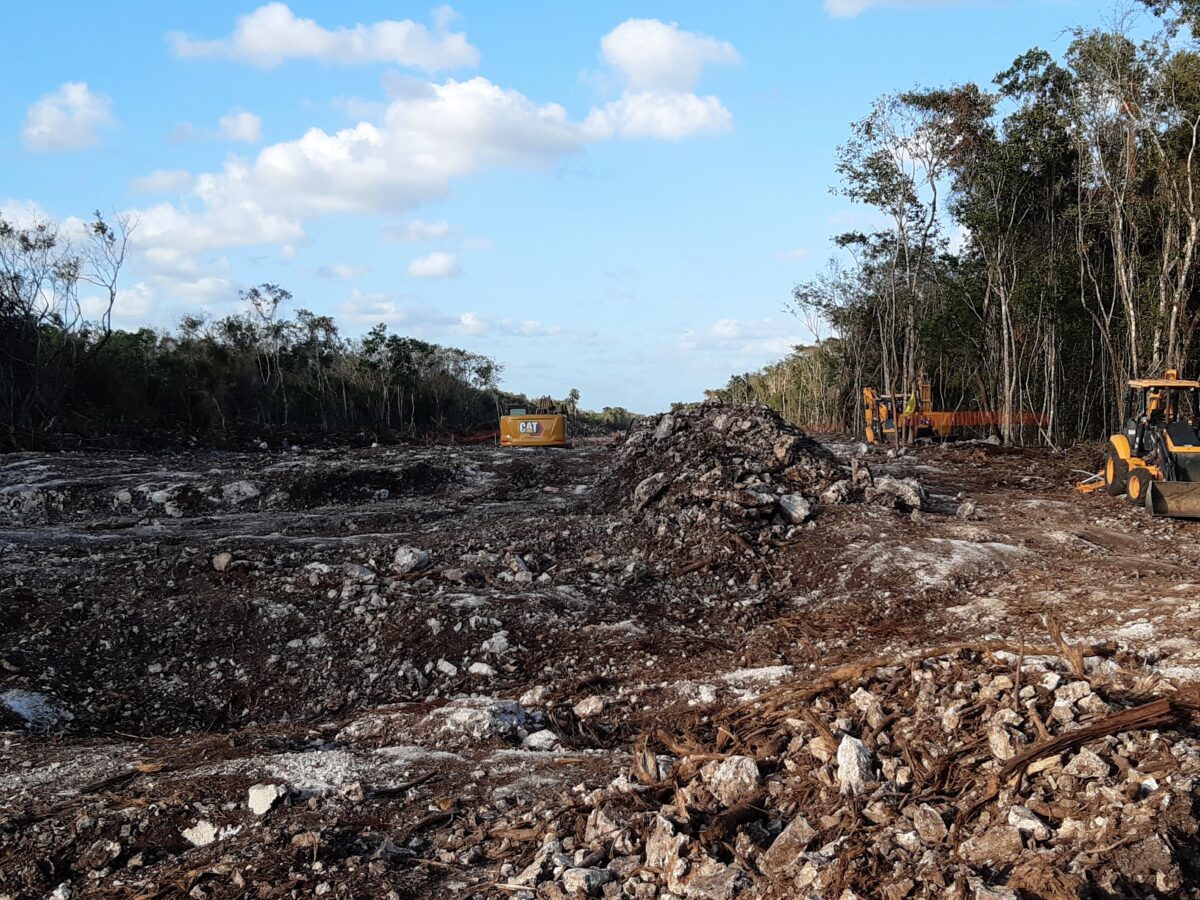 In the Mexican municipality of Solidaridad, whose municipal seat is Playa del Carmen, on the Yucatán peninsula, the construction of one of the seven sections of the Mayan Train has deforested at least 10 kilometers of jungle. CREDIT: Emilio Godoy/IPS

The megaproject contains contradictions, because while the government promises sustainable tourism in other areas of the peninsula, the railway threatens the local sustainable tourism attractions, such as the cenotes, the caves and the entire ecosystem.

In the Yucatan Peninsula there are some 7,000 cenotes – freshwater sinkholes resulting from the collapse of limestone bedrock that exposes groundwater. Between Playa del Carmen and Tulum, cities only 61 kilometers apart, there are 13 of these ecosystems.

In the entire state of Quintana Roo there are at least 105 flooded caves over 1,500 meters in length and 408 underwater caves.

The TM threatens the largest system of subterranean rivers and flooded caves on the planet, a complex of submerged caves more than 340 kilometers long beneath the limestone floor.

From land to sea

Lorenzo Álvarez, a researcher at the Academic Reef Systems Unit of the Institute of Marine Sciences and Limnology at the public National Autonomous University of Mexico, says that as a regional development project, the railway will be “catastrophic”.

“Hundreds of hectares are being deforested,” he told IPS. “We are going to end up with new cities or existing ones are going to grow. This could be a tragedy of enormous proportions, because the ecosystems are being disturbed. Simply by removing vegetation cover, the capacity of water systems to capture and filter water is altered.”

The consequences: water with more sediment in the reefs, waste, leachates and more pollution.

That is the vision that the visitor gets looking at the map from inland to the coast in Puerto Morelos, in the north of Quintana Roo, which has suffered a real estate invasion, to the extent that the reefs have been mortally wounded. They are part of the Mesoamerican Reef, the second largest in the world, after Australia’s Great Barrier Reef.

The fear in this former fishing village, which is now the largest port on the so-called Riviera Maya with 27,000 inhabitants, is that the TM will exacerbate the real estate boom. But most locals are unaware of the danger. 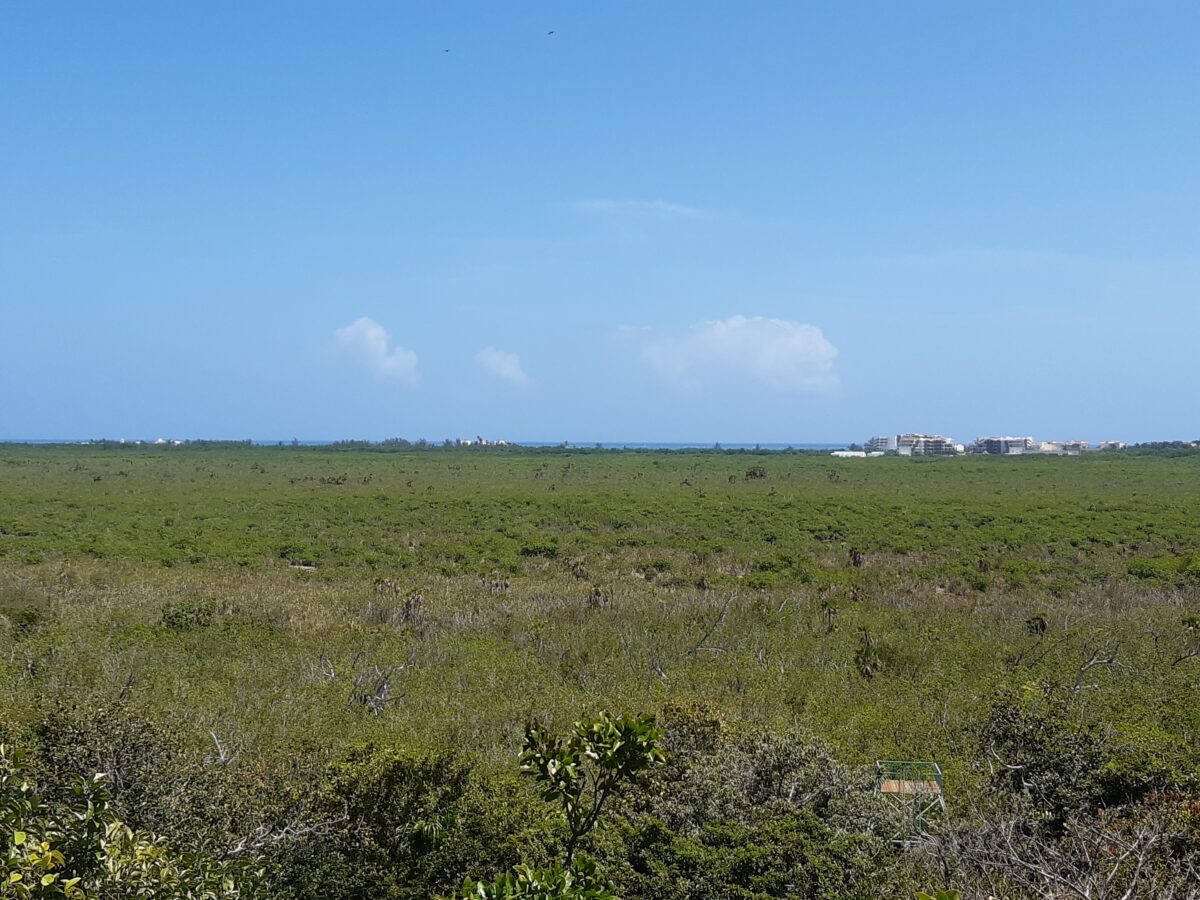 The Mayan Train will run through the outskirts of Puerto Morelos, seen in the distance in the photo. Located 38 kilometers from Cancun and forming part of the so-called Riviera Maya, this former fishing village is now a port city with real estate encroachment that has damaged the reefs off its coast. The railroad could spell the end for the fragile ecosystem. CREDIT: Emilio Godoy/IPS

“Construction hasn’t started yet,” Fabiola Sánchez, an activist with the non-governmental group United Voices of Puerto Morelos, told IPS. “There has been no tangible damage here, as in other municipalities, but we know the environmental implications. Our aim is prevention, because we are going to suffer the same environmental effects.”

The activists’ concern is focused on the 2020-2030 Urban Development Program, which they accuse of favoring hotel and real estate interests to the detriment of citizen participation and sustainable planning on a coastline already stressed by excessive tourism.

And, above all, they accuse it of favoring construction of the new railway.

Through legal appeals, opponents of the program have managed to bring it to a halt, but they are witnessing construction without land use planning in other municipalities.

The Ministry of the Environment and Natural Resources (Semarnat) itself warns that these poles may represent the greatest environmental threat from the railway line.

The sustainable cities should promote “well-managed urban planning” and should help reduce the backlog of local and regional services, according to the official website.

But the construction work on the ground and the lack of urban development plans contradict these precepts.

In any case, the railway’s route does not seem to be set up for the benefit of excursionists and local workers, as its planned stations are far from tourist sites and work centers. Passengers would have to use other means to travel to these places.

In addition, the popular perspective values supposed future returns, such as jobs and income, over current and potential harms, like deforestation.

There have also been labor abuses. Section 5 workers earn about 39 dollars a week – less than the minimum daily wage of 8.5 dollars – and work without protective equipment and without signed contracts, as IPS learned.

Furthermore, there has been arbitrary treatment of “ejidatarios” or local residents of ejidos, since in Campeche the authorities paid about 2.5 dollars per square meter of expropriated land, while in Quintana Roo the price rose to about 25 dollars.

The threat of collapse is not merely an apocalyptic proclamation, environmentalists insist. They quote the closing line of the novel La vorágine (1924), by Colombian writer José Eustasio Rivera, a Latin American classic: “The jungle swallowed them up”, in allusion to the fate of its characters, and they say the same thing could happen to the TM.