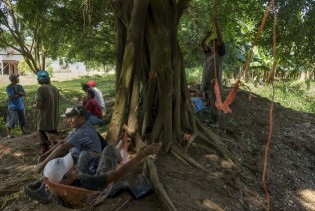 By Diego Arguedas Ortiz
A strike that has brought activity to a halt since January on three major banana plantations on Costa Rica’s southern Caribbean coast, along the border with Panama, has highlighted the abuses in a sector in the hands of transnational corporations and has forced the governments of both countries to intervene.
ADVERTISEMENT ADVERTISEMENT