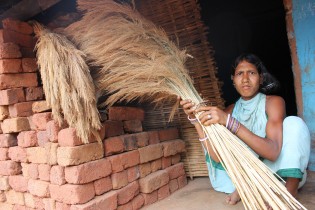 By Manipadma Jena
Kama Pradhan, a 35-year-old tribal woman, her eyes intent on the glowing screen of a hand-held GPS device, moves quickly between the trees. Ahead of her, a group of men hastens to clear away the brambles from stone pillars that stand at scattered intervals throughout this dense forest in the Nayagarh district of India’s eastern Odisha state.
ADVERTISEMENT ADVERTISEMENT