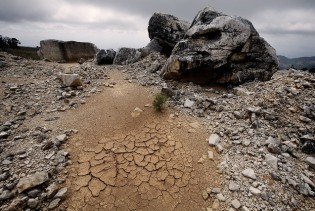 By Isolda Agazzi
Scientists gathered in Geneva for the first High-level Meeting on National Drought Policy (HMNDP) in over 30 years have identified data collection and sharing as some of the main challenges to effective prevention of drought. Clear goals and strong political will are vital to building policies at the national level, they say.

By Manipadma Jena
In a country of 1.2 billion people, the threat of drought takes on epic proportions. Over a period of two centuries (between 1801 and 2002), India experienced 42 severe droughts, according to the Indian Space Research Organisation. One of these, in 1979, cut food grain production by 20 percent; another, in 1987, damaged 58.6 million hectares of cultivated land, affecting 285 million people.
ADVERTISEMENT ADVERTISEMENT