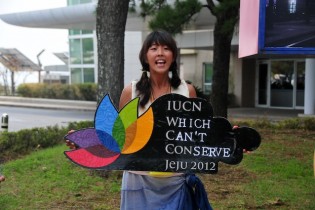 By Amantha Perera
At the close of the ten-day World Conservation Congress that ran from Sept. 6-15 on the South Korean island of Jeju, members of the convening International Union for Conservation of Nature (IUCN) agreed on an ambitious four-year action plan for protecting global natural resources.

By Amantha Perera
Before business could get under way, the controversy had to be dealt with. That appeared to be the strategy of the South Korean government just before the opening of the high profile International Union of Conservation of Nature (IUCN) World Conservation Congress here on Thursday.
ADVERTISEMENT ADVERTISEMENT