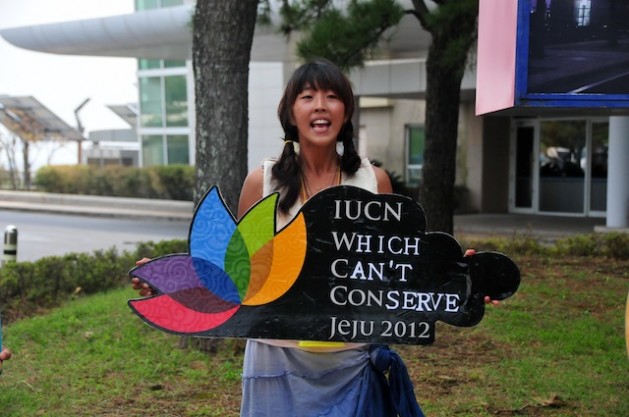 The conflicting role of big businesses did not go unnoticed by activists at Jeju. Credit: Amantha Perera/IPS

JEJU, South Korea, Sep 18 2012 (IPS) - At the close of the ten-day World Conservation Congress that ran from Sept. 6-15 on the South Korean island of Jeju, members of the convening International Union for Conservation of Nature (IUCN) agreed on an ambitious four-year action plan for protecting global natural resources.

Taking the form of a 24-page document, the four-year programme focuses on the two main themes that dominated discussions among 10,000 participants at Jeju last week – that natural resources are stretched dangerously thin and that nature itself could hold the solutions to the crisis.

The challenge now, according to IUCN Director General Julia Marton-Lefèvre, is ensuring that the programme actually gets implemented.

Promoting nature-based solutions for industries as well as communities was the main thrust at the congress, from getting multinational companies to adopt sustainable solutions, to pressing governments to safeguard protected areas, or announcing a partnership with IT giant Microsoft to track extinction threats worldwide.

Experts agreed that the mega congress has the potential to set the agenda not only for the conservation community but for the entire global community to face up to threats brought on by changing climates.

Achim Steiner, executive director of the United Nations Environment Programme (UNEP), told IPS that the congress was the best forum to assess whether there was hope beyond “the political stalemate paralysing the current capacity of nation states to move on issues like climate change”.

Steiner added that this June’s U.N. summit on sustainable development (Rio+20) reiterated the unfortunate fact that the politically divided world still lacks the capacity to act in unison on saving the environment.

“None of us want to wait, but we are forced to wait,” Steiner said.

IUCN can step into this bubble of inaction and make its membership of 89 states, 124 government agencies and 1018 non-governmental organisations count.

The Union believes its primary strength is that it reflects the cutting edge of the conservation community and has the power to set a radical agenda.

An assessment titled ‘A Review of the Impact of IUCN Resolutions on International Conservation Efforts’ recalls that it was the IUCN meeting in Ashkhabad, held in the former Soviet Union in 1978, that gave birth to the term ‘sustainable development’,  which has now permeated the vocabulary of every leading international institution concerned with the impact of development on the natural world.

“This phrase has now entered the mainstream of development thinking and has had a profound influence on the design and operation of conservation and development practice throughout the world,” according to the report.

Braulio F. de Souza Dias, executive secretary of the U.N. Convention on Biological Diversity (CBD), has much more recent examples of the IUCN’s influence on the world stage.

“All the progress we have made on the CBD agenda has been very much influenced by the results of discussions at IUCN congresses,” Dias told IPS, adding that the programme of protected areas, which the CDB set up in 2007, was a direct result of a proposal that came out of the previous IUCN congress.

At the congress last week the emphasis fell unambiguously on getting businesses big and small to adopt sustainable solutions.

“It is great that they have come,” Marton-Lefèvre told IPS, referring to the overwhelming presence of businesses like Holcim and Nestle’s Nespresso who were showcasing their programmes at the congress.

Experts like Steiner and Dias were much more cautious in their praise of the multinationals, but acknowledged that the business community showing an inclination to be “green friendly” was welcome, given the paralysis of national governments.

Dias told IPS that environmental groups and activists were increasingly coming to the realisation that it was better to at least enter into dialogue with big businesses rather than keep up an endless stream of criticism.

“More and more organisations are seeing that they can be much more effective if they establish partnerships to discuss actual results,” he said.

Interactions between business groups and the conservation community is likely to lead to a better understanding of each other, according to Naoko Ishii, chairperson of the Global Environment Facility (GEF), a Washington-based public fund that supports projects related to environment and sustainable development.

“I am confident that the discussions will influence action on a broader level,” Ishii, who has previously served as Japan’s deputy finance minister and country head of the World Bank in Sri Lanka, added.

However, Steiner cautioned against the expectation of results immediately after the congress.

“Let us be clear, to ask the private sector to lead change in the absence of corresponding public policy is not going to work,” he told IPS.

Dias, his colleague from the CBD, struck a much more positive tone, but he too admitted that once the talking stops, the real challenge will be to get all parties – governments, businesses and activists – onto one platform.

“Overall we are still losing biodiversity, and we have to scale up action,” he warned.