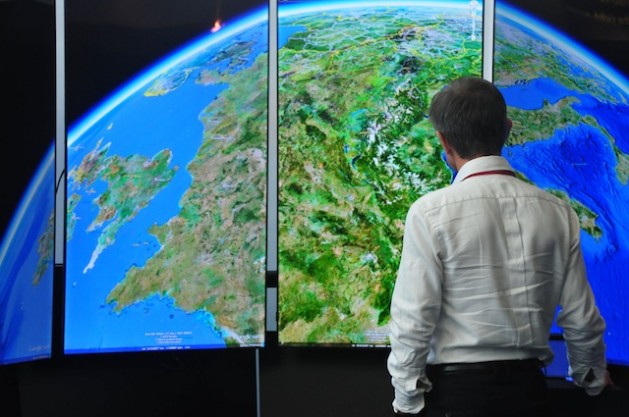 Business is being encouraged to play an increasing role in saving the environment around the world. Credit: Amantha Perera/IPS.

JEJU, South Korea, Sep 12 2012 (IPS) - The outcome of the June Rio+20 UN conference on sustainable development was the undisputed inability of governments to come to an agreement on moving ahead to protect the planet. Three months later, the International Union for Conservation of Nature (IUCN) is proposing what can be done as a collective.

“I think we are really moving ahead on the agenda set at Rio with all the agreements that are being reached here,” Julia Marton-Lefèvre, IUCN director-general told IPS. Members at the Congress are exploring ways of turning the Rio agenda into action, she said.

The emphasis at the IUCN congress is on what big businesses can do to help achieve sustainable growth. The Geneva-based World Business Council for Sustainable Development (WBCSD) is one of the major sponsors of the congress.

It took out a two-page spread in the International Herald Tribune over the weekend of Sep. 8 and 9 to highlight the congress, which is being held from Sep. 6 to 15. Sponsorship for the supplement came from big companies like Hitachi, Holcim and Shell, who are also sponsors of the congress.

Peter Bakker, WBCSD president, told IPS that in the past businesses, big and small, were seen as destroyers of the environment. That line of thinking is slowly changing, Bakker said.

Big companies seem to be taking serious note of the world in which they operate in. “More recently we have begun to understand that the world is reaching its limit in a number of resources,” Bakker said.

Companies and experts at the congress talked of the need for valuing natural capital, or putting a value on a company’s impact on the environment and ecosystems such as water or greenhouse gas emissions. So far they have had zero or limited value placed on them.

Achim Steiner, executive director of the UN Environment Programme (UNEP) told IPS that while world governments stand paralysed and unable to move on conservation, all the money talk at Jeju, the South Korean island where the congress is being held, might at least get them thinking.

“We have to bring a value to nature through economics,” he said. The more people talk of ‘natural capital’, the higher the awareness that products have a hidden natural cost, Steiner said. “Society has to understand there is a price on nature.”

Others have argued that regulations have to be brought in by which accounting standards are changed to look at the impact of a company on nature in the accounting process itself.

At Rio, too, activists had spoken of the need to lobby individual governments and companies to seek unilateral action where bilateral agreements seem impossible.

“If companies move they can inspire, and open the political space for governments to do their job,” James Leape, executive director of the World Wildlife Fund (WWF) had told IPS at the conclusion of the Rio summit.

In Jeju, the importance placed on big businesses has gone up a notch; businesses are seen to have replaced governments as the number one instigator of action.

IUCN director-general Marton-Lefèvre defended the status accorded to businesses. “Aren’t businesses a part of society that should be involved in this?”

The building of a cosy relationship has, however, raised eyebrows among some activists.

“We have to be careful about green-washing,” Braulio Ferreira De Souza Dias, general secretary of the Convention on Biological Diversity (CBD) told IPS. But he also sees the close interaction as necessary and inevitable. “After all they are responsible for the unsustainable use of biodiversity. We have to convince them to change the way they do business.”

The CDB head told IPS that the partnership between agencies like the IUCN and private companies was still in its initial stages and evolving into a workable understanding.

He agreed with WWF’s Leape that if big companies begin to act on conservation and sustainable development, it could ease the path for more governmental and intra-governmental action.