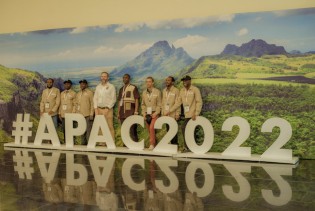 By Amantha Perera
The Red River Giant softshell turtle (Rafetus swinhoei) is the stuff of legend in Vietnam. The fabled turtle in Hanoi’s Hoan Kiem Lake is popularly known by the name Kim Qui or Golden Turtle God, and it made its first historical appearance in 250 BC.

By Amantha Perera
The outcome of the June Rio+20 UN conference on sustainable development was the undisputed inability of governments to come to an agreement on moving ahead to protect the planet. Three months later, the International Union for Conservation of Nature (IUCN) is proposing what can be done as a collective.

Getting Into the Business of Environment

By Amantha Perera
Regulations that stand in the way of conservation programmes lower their likely success, experts warned at the World Conservation Congress of the International Union of Conservation of Nature (IUCN) in Jeju, South Korea.

By Jon Letman
As construction of a hotly contested naval base on South Korea’s Jeju Island advances, there’s a showdown underway.
ADVERTISEMENT ADVERTISEMENT