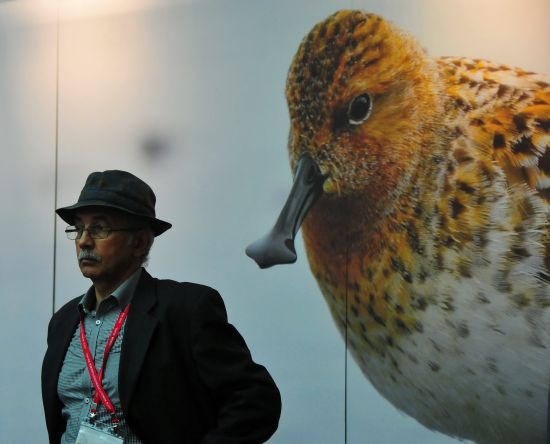 A man stands in front of a giant cut-out of the Spoon-billed Sandpiper, of which only 100 breeding pairs survive. Credit: Amantha Perera/IPS

JEJU, South Korea, Sep 15 2012 (IPS) - The Red River Giant softshell turtle (Rafetus swinhoei) is the stuff of legend in Vietnam. The fabled turtle in Hanoi’s Hoan Kiem Lake is popularly known by the name Kim Qui or Golden Turtle God, and it made its first historical appearance in 250 BC.

Today this species could indeed use some divine intervention. Experts at the World Conservation Congress here in South Korea’s southern resort island of Jeju warned that there are only four specimens of the famous turtle known to be alive. And only two have any realistic hope of breeding, said Professor Jonathan Baillie, director of conservation at the Zoological Society of London (ZSL).

At the Congress, which ended Saturday, the ZSL and the International Union for Conservation of Nature (IUCN) released a list of the 100 most threatened species in the world and called for concerted action to save those unfortunate enough to make it on to the list, like the Red River Giant turtle.

The report, titled “Priceless or Worthless?”, says that all breeding efforts to produce hatchlings of the Red River Giant have failed since 2008. “We have to get the last ones together to breed,” Baillie put it starkly.

The Red River Giant is probably the most famous species on the list that includes such obscure species as the Liben Lark (Heteromirafra sidamoensis) from Ethiopia, of which less than 300 survive, or the Javan Rhino (Rhinoceros sondaicus), considered the rarest of all living rhinos. A Javan Rhino horn goes for as much as 30,000 dollars on the black market, it is that rare.

Or take the case of the Suicide Palm (Tahina spectabilis), found in northwestern Madagascar. Only discovered in 2007, it is probably a good thing that it can grow so large that individuals can be detected on satellite imagery, as only 90 known individual trees have been located. The tree’s name comes from the fact that it dies exhausted from the effort of producing so many flowers on a stem up to 16 feet long.

The list, which covers 48 countries, was developed by 8,000 scientists from the Species Survival Commission of the IUCN, which organised the 10-day Congress in Jeju.

But Baillie and the other authors fear that the species on the list will be lost because none of them offer any obvious benefit to humans.

Baillie told IPS that despite the global media’s focus on threatened species, half of the most threatened hardly get any attention. “This new report will challenge the way we look at conservation,” he said.

What scientists like Baillie and activists are hoping for is a paradigm shift in the traditional outlook on animal conservation – one that will look not at how useful the species are to humans but rather at whether they have a right to live and avoid extinction due to human exploitation.

But Baillie said he was not confident that the new report, and the renewed lobbying by the conservation community at this year’s IUCN Congress, would change the plight of the listed species.

The IUCN Congress brings together policy-makers and environmentalists every four years.

In 2004, a set of conservation targets were drafted, with a six-year timeframe. In 2010, a fresh set of targets and commitments were inked, as the 2004 targets had not been met. This recent conservation record is the cause of Baillie’s unease.

“I am not overly optimistic. But if the conservation community starts to really put out a strong message, that these species are absolutely essential, that we must value life – this would have much broader implications,” he said.

He also said that if one or two species with no obvious use for humans were allowed to simply disappear without any action taken, it would set a dangerous precedent.

There is no lack of public pronouncements by decision-makers about their commitment to conservation. But the same enthusiasm is not apparent when translating such rhetoric into action on the ground.

“Few politicians will say they don’t value life, (it is) just that we have not followed through with the legislation,” Baillie said.

But other conservation experts told IPS that even legislation did not help when community will to save a species is lacking.

“Very often we can get the legislation in place, but then it is not enforced,” Jane Smart, the director of the IUCN Global Species Programme, told IPS. She said the only thing that changes after laws are passed is that exploitation continues at the same rate, albeit illegally.

There are other conditions as well that can drive species to extinction, which cannot be deterred by simply putting laws in place. IUCN Red List Unit Manager Craig Hilton Taylor told IPS that disease, changing climates or shrinking habitats can all lead to extinction.

“You need to asses what threats are driving the species to extinction before you can decide on the action to be taken,” he said.

So far what is known is daunting in itself: 21 percent of all known mammals, 29 percent of amphibians, 12 percent of birds, 35 percent of conifers and cycads, 17 percent of sharks and 27 percent of reef-building corals are threatened with extinction, according to the IUCN.

But Smart warned that the figures only reflect part of the story. “We know what to do for many species. But there are many, many we don’t know what to do about,” she said.

What the conservation community wants are firm commitments from governments that they will take action on what is known.

“We know what we have to do. What we need is for decision-makers to find the political will to make it happen,” Smart said.

For Baillie, it is a simple question of life and death. “If we value the right to life, then we have to step up to the plate,” he said.