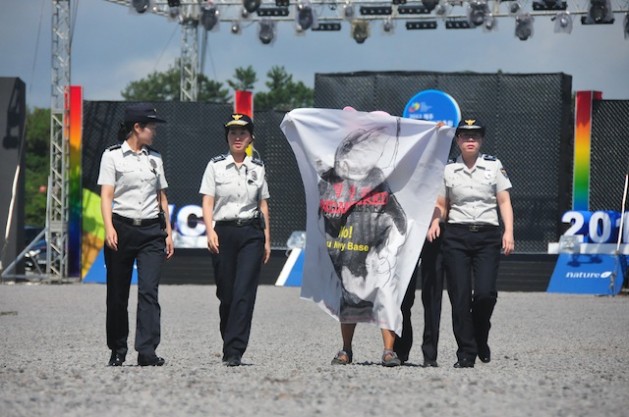 A protester is led away at the start of the IUCN meeting. Credit: Amantha Perera/IPS.

JEJU, South Korea, Sep 7 2012 (IPS) - Before business could get under way, the controversy had to be dealt with. That appeared to be the strategy of the South Korean government just before the opening of the high profile International Union of Conservation of Nature (IUCN) World Conservation Congress here on Thursday.

The Korean Navy spoke publicly for the first time on the construction of a naval base in the village Gangjeong about 10 minutes drive from the congress site. The construction has been vehemently opposed by local villagers and international environmental activists who say the base, just 300km from the Chinese shore, will harm the local marine life irrevocably.

As hundreds of delegates and other participants lined up outisde Jeju’s International Convention Centre registering for the IUCN mega event, held every four years, South Korean defence ministry spokesperson Min Seok Kim said that the port construction process had gone through a democratic process. “It is the wish of the majority,” he said.

There are reports that some delegates at the IUCN congress were preparing a critical resolution on the port project to be adopted at the congress. The South Korean government was clear on its stand in case such a move is successful. “We wish that you (congress) focus on the environment, the port is being built by the tax (money) of the South Korean people, it will proceed,” Kim said.

For the villagers it was yet another attempt to silence opposition to the project. About two hours after the media briefing by the Korean military ended, four women slipped through security into a public area just outside the main venue pulling out banners and handwritten posters condemning the construction.

The protest was small and mostly without incident – the women were moved out by security when they entered a dining area before finally being escorted outside the venue parameter by a group of stern looking policewomen.

“They are lying, they are destroying my village and my people,” Seng-gu, one of the protestors told IPS.

The importance of the Jeju port is primarily military though the South Korean government reiterated throughout the media briefing that it was both a civil and military complex with facilities for berthing large cruise ships, something that the tourism-invested Jeju economy lacks.

Jeju lies right in the middle of east-west sea lanes through which 99 percent of South Korea’s foreign sea trade flows. According to Kim, there will be an eight-hour time lag if ships were to be deployed from Busan, that lies further east, and not Jeju in case of an emergency. “It is very important due to security issues,” Kim said of the port that would hold 20 naval ships once completed by 2015.

The Korean government was also emphatic that minimum environmental damage was being caused by the port project. “There is only sand in the construction site,” naval lieutenant Tae Ryu told the press. She detailed that the project had gone through numerous evaluations and discussions with the local community and others since being first proposed in 1993.

In July this year the Korean Supreme Court ruled in favour of the construction in a case brought against the project. The Navy said that the court had taken into account the fact that the project was environmentally friendly.

They also rejected the port’s functionality as a civil port, arguing that only 5 percent of the nearly one billion dollars spent on the project has been set aside for civilian use. “The name was officially euphemized to ‘civil military complex’,” according to a recent newsletter by the villagers.

The villagers also reject the government position that since no coral is found on the actual construction site, no harm was being done. “How can they say that, it is the whole environment of this island we are talking about, not cutting it into little pieces. They are stealing our heritage,” Seong-gu told IPS.

Critics of the project claim that it was being constructed under U.S. influence. The military says that the port will be open to all of South Korean allies, including Russia and China in the remote event of them seeking its use, and to the U.S.

It is unlikely that there would be any change to the construction, whatever view is adopted at the IUCN congress. There is too much riding militarily for that.

“If you want peace you have to prepare for war,” military spokesperson Kim said. He said it would bring stability to the region.

Stability is not what the port has brought villagers like Seong-gu. For them it is the biggest threat to their way of life. “We will keep protesting, keep raising our voice, however small it may be, it is our land.”