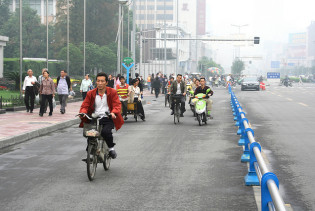 By George Gao
The China pavilion is a red, inverted pyramid in Shanghai that was built for the city’s bustling 2010 World Expo. While the pavilion pays some homage to China’s ancient past, it mostly shows off China’s 21st century ambitions, with as much swagger as the 2008 Beijing Olympics.
ADVERTISEMENT ADVERTISEMENT