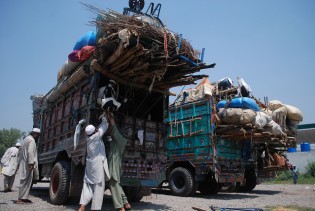 By Ashfaq Yusufzai
Shaukat Ali, a shopkeeper originally hailing from Miramshah in the Northern Waziristan Agency of Pakistan’s Federally Administered Tribal Areas (FATA), looks exhausted as he sits outside a makeshift shelter with his family of 10.
ADVERTISEMENT ADVERTISEMENT