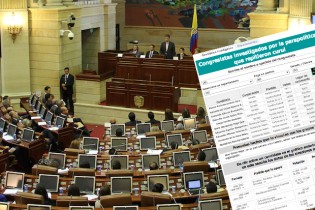 By Constanza Vieira
In July 2004, when paramilitary leader Salvatore Mancuso was demobilising, he admitted to the Colombian parliament that the illegal extreme rightwing forces controlled 35 percent of the seats. Ten years later the situation is very similar: one-third of the new senate, where congressional power mainly resides, is allegedly linked to the paramilitaries.
ADVERTISEMENT ADVERTISEMENT