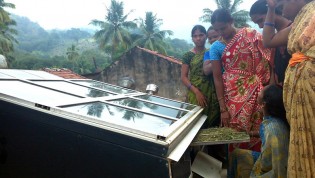 By Tharanga Yakupitiyage
Wildlife is being wiped out in an unprecedented rate, and it’s our fault. But a new deal could provide a new pathway forward.

By Andreas Sieber
Less than 100 days before the U.N. climate change conference (COP21) in Paris in December, there are now only few who believe that the conference will not produce a treaty. But for most countries involved, this is rarely the question.
ADVERTISEMENT ADVERTISEMENT