LIMA, Nov 6 2007 (IPS) - Former Peruvian noncommissioned army officer Norman Alfonso Solano is happy because he has once again been recruited to work as a private security guard in one of the most dangerous places in the world: Iraq. 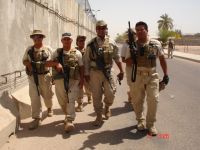 Although he saw fellow security guards killed by the Iraqi resistance when he was working in the southern Iraqi city of Basra, Solano clenched his teeth and told himself, "I need the money." This time he is heading to Baghdad.

The robust 46-year-old 1.80-metre tall Solano forms part of a new contingent of former members of the Peruvian armed forces and police who will guard U.S. installations in Iraq for a year in exchange for a hefty paycheck, by Peruvian standards: 1,000 dollars a month.

"I earn 200 dollars a month here, and that’s when I manage to find work," said Solano, a veteran of the 1980-2000 counterinsurgency war against the Maoist Sendero Luminoso (Shining Path) guerrillas.

The U.S. private military company Triple Canopy, which has drawn criticism for taking advantage of the high unemployment and low wages in Peru to recruit workers, has been hiring former members of Peru’s security forces to work in Iraq for the past several years. It also hires workers from Chile, Colombia and El Salvador.

The firm was founded in 2003 by former members of the U.S. army&#39s elite Delta Force. Thanks to contacts in the George W. Bush administration, it quickly won lucrative contracts with the State Department.

Like other private security firms, Triple Canopy provides bodyguard and site security services to U.S. infrastructure and personnel in Iraq, which has been occupied by the United States since March 2003.

In Peru, the availability of poor, well-trained potential applicants with combat experience is so broad that Triple Canopy has opened an office in Lima: TCLA Internacional, run by U.S. citizens Jay Franklin Bryant, Armand Leon Gadoury and Herbert Terrence Williams.

Hiring here was previously carried out by another firm, Defion Internacional. But Triple Canopy decided to do the recruiting in its own name, TCLA general manager Hugo Cobos told IPS.

"We no longer have any links with Defion. This is a completely new company," said Cobos. But he declined to provide further details of TCLA’s activities.

"It is company policy to only give out information in response to an official request. You send us a letter with the doubts that you would like us to clear up, we will send it on to corporate headquarters in the United States, and they will respond. It&#39ll take a week for you to receive a response, at the most," he said.

But although IPS followed these instructions, no response was ever received.

Authorities in Peru estimate that at least 1,600 Peruvians have been hired by U.S. companies to work in Iraq and Afghanistan since 2005. However, that figure is only approximate, because the firms are under no obligation to report on their activities.

"In the Ministry of Foreign Relations, we have no list of names of Peruvians who have left the country to work in security in Iraq or any other conflict zone," Enrique Bustamante, head of the Secretariat of Peruvian Communities Abroad, told IPS.

"In order for us to keep records, the companies that hire them or the hired security guards themselves would have to voluntarily provide us with information. There is no statute or law requiring them to do so," he said.

"There were many really tense days, very dangerous. I witnessed mortar attacks by the Iraqi resistance and saw fellow employees from other countries shot dead and Peruvian colleagues seriously injured," he said.

"But the money I saved up has run out," he went on. "So I applied, and they told me to get my documents ready because they’re putting together another contingent to be sent over."

"Yeah, I&#39m going to work for Triple Canopy again, like the first time. I can&#39t complain; things went really well for me."

Norman’s brother is midfielder Norberto Solano, who has made a name for himself in English football and forms part of Peru’s national team.

The Triple Canopy recruiters did not hesitate to hire him as soon as he applied: he served in the army from 1978 to 1986, and has ample combat experience. He took part in the brief 1995 border skirmish with Ecuador, and in counterinsurgency operations against Sendero Luminoso in the 1980s.

"I left the army because I had a family to support and the pay was bad. I worked in different security companies for years. I was a supervisor and instructor, but when the war against terrorism ended, there wasn&#39t much work available, and I found myself unemployed until I heard from some friends that they were recruiting people for Iraq," he said.

"My family begged me not to take the risk. The news coming from over there was really alarming. But it was a chance I couldn&#39t pass up. It was worth risking my neck."

Several Peruvian security guards who have come back with injuries have protested over the lack of medical insurance and compensation. According to a copy of a contract to which IPS had access, the employee agrees that any claim to reparations must be filed at the Fairfax district court in the U.S. state of Virginia, where Triple Canopy is based.

The question is, how many Peruvians could make the trip to the United States, or afford a U.S. lawyer?

"What we are suggesting is that the recruits register with us voluntarily, for us to have an idea of how many have gone abroad and how we can contact them, and for us to keep a list of their relatives here, instead of waiting for a tragedy to happen before we take action," said Bustamante.

The government is unaware of how many Peruvians have been shipped overseas to take part in foreign wars, and it is even less aware of how many have been injured or have received compensation, insurance or medical care, because the contracts contain a confidentiality clause.

In January, members of a mission from the United Nations working group on the use of mercenaries, headed by chairperson-rapporteur Amada Benavides de Pérez, told IPS that they had received reports that the Peruvian recruits were going beyond the work of mere security guards and received training in firing weapons and at times had used their guns.

Bustamante was careful not to refer to the Peruvian recruits as "mercenaries", "because they are hired as security guards. It is a bit bold to use that term to describe people who are going over to guard institutions. Do we call people who work here in security ‘mercenaries’ just because they carry weapons and use armoured vehicles?"

Nor would it be possible to keep these firms from recruiting here, or to prevent Peruvians from working in war zones. "We as a state cannot make that decision. Individuals are free to take the jobs they choose and assume their own risks, and the state cannot adopt measures that go against their free will," he said.

"During my stay in Basra, we were the targets of around 450 attacks with explosives," said Solano. "We carried M4 and AKM assault rifles and M240 machine guns. We generally only fired warning shots. There was a lot of tension, especially when the enemy was firing mortars. We had a nasty sensation of being trapped or shut in. Fear was just something you lived with all the time."

One of the worst cases of injuries was that of Richard Misarayme, 24. "We prayed for him because it looked like he was going to die. But he made it through," Solano recalled.

"I built a house for my family and paid for my children’s schooling," he said. "It was a veritable fortune, and it’s not every day that a chance comes along to earn that kind of money. It would have taken me years to save up here. That&#39s why I&#39m going back to Iraq. I make my living off of war, and as long as there’s war, I&#39ll keep doing so."