MELBOURNE, Mar 9 2008 (IPS) - While conjecture remains over whether deforestation was to blame for the landslides and floods that killed dozens of people in Indonesia on Dec.26 last year, there appears to be a consensus regarding other consequences of forest destruction. 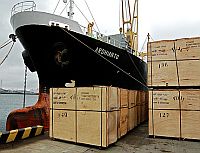 Indonesian plywood being unloaded at a Japanese port Credit: Greenpeace

"Deforestation was part of the cause," says Rully Syumanda, discussing the reasons behind the devastating series of landslides and floods in Java which killed more than 100 and left upwards of 70,000 people displaced, according to some estimates.

Syumanda, a forest campaigner for WALHI – the Bahasa Indonesian acronym for the Indonesian Forum for Environment, part of Friends of the Earth International – told IPS that the clearing of forest for seasonal crops such as vegetables and tobacco contributed to the destruction.

But Frances Seymour, director general of the Indonesia-based Centre for International Forestry Research (CIFOR), is non-committal regarding the role played by deforestation in the floods and landslides that hit Indonesia’s most populous island in late 2007.

Seymour argues that forest cover is just one of the variables involved in landslides and floods. Other factors, according to Seymour, include the nature of the soil, the intensity of the rain, the gradient of the slope, and the level of a given area’s development.

"It’s clear that trees and other land cover can play a role in preventing shallow landslides, and by that I mean landslides that move a metre or less of soil," says the CIFOR boss.

But with larger landslides where the soil is moving at a much greater depth, whether or not deforestation has occurred is of little consequence "because the roots just don’t go that deep," argues Seymour, adding that it is a similar story for floods.

However, environmental groups, along with a senior official from Indonesia’s national disaster agency, fingered deforestation as a causal factor behind December’s disaster. Even the country’s president, Susilo Bambang Yudhoyono, implied that deforestation was a major contributing factor when he urged his fellow citizens to take better care of the forests during a tour of some of the flood-devastated areas.

Seymour says that "what makes it into the newspapers are these really large-scale, major landslides and floods and those are precisely the ones that forests really can’t do that much about."

"Deforestation can play a role in both landslides and floods, but it’s probably a smaller role than (what) the popular perception is," Seymour told IPS.

While it may be difficult to ascertain the precise impact that deforestation has on landslides and floods, it is clear that forest destruction does impact Indonesia in other ways.

At last December’s United Nations climate change conference on the Indonesian island of Bali, the executive secretary of the United Nations Framework Convention on Climate Change, Yvo de Boer, spoke of the increasing awareness of deforestation’s effect on global warming.

"In the climate change process, there is growing political acknowledgement of the need to reduce emissions from deforestation," said de Boer.

When forests are destroyed, the ability of trees and plants to absorb carbon is lost. Additionally, deforestation – estimated to be responsible for 20 percent of total greenhouse gas emissions (GHG) – causes carbon dioxide stored by the forest to be released back into the atmosphere.

Greenpeace says that Indonesia had the world’s fastest rate of deforestation between 2000 and 2005, with the equivalent area of some 300 football pitches cut down every hour. Deforestation is regarded as the main factor for Indonesia turning into the third largest emitter of GHGs in the world.

Carbon released through deforestation in Indonesia is compounded due to the peat land, which stores large quantities of organic matter, upon which the forests stand. Seymour says that the GHG emissions potential of a hectare of peat swamp is many times greater than that of a dry forest area of the same size.

"Once the forest has been removed and the swamp starts being drained, that organic matter begins to oxidise and give off continuing emissions. It’s sort of like the goose that keeps on giving," she told IPS.

Biodiversity is also under threat from deforestation. "Forests are a harbour for a large proportion of the world’s biological diversity, and if you lose the forest, you lose the biodiversity," says Seymour.

The CIFOR director points out that the island of Borneo – which Indonesia shares with Malaysia and Brunei – is disproportionately rich in species. "Borneo has less than one percent of the earth’s land area (but) it has six percent of the world’s bird species, mammal species and flowering plant species."

The loss of biodiversity has implications for local communities. Diet and health are adversely effected when animals and plant species – many of which are used for medicinal purposes – are wiped out due to deforestation. Seymour argues that culture is also impacted, as "a lot of these species have traditional ornamentation and ritual kinds of uses."

While clearing forest for the planting of seasonal crops continues to be practised by small holders, Seymour says "the bigger drivers are usually commercial-scale conversion."

Timber and pulp industries, as well as the demand for palm oil, play major roles in deforestation. WALHI’s Syumanda says that the industries’ requirements "are bigger than the ability of the forest to supply raw material."

According to Syumanda, this contributes to the problem of illegal logging which degrades the land, making it more vulnerable to fires. "The Indonesian government has started the war to fight illegal logging, but it’s only on the ground, not at the policy level," he says.

Additionally, Seymour argues that companies don’t want to develop plantations on degraded land. While conflict regarding who owns the land plays a role, companies are more interested in profit-making.

When a company is awarded a concession by the forestry ministry to convert forest land into plantations, it has access to the standing timber which "might be even more valuable than the plantation," says Seymour.