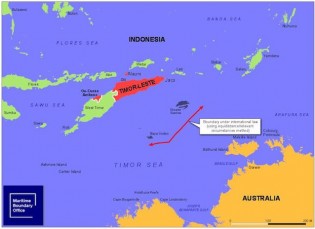 By Stephen de Tarczynski
Concern is growing for the mental health of thousands of people locked up indefinitely in this country’s immigration detention system.

By Stephen de Tarczynski
Australia has taken a major step in reducing its future greenhouse gas output with the announcement of a plan that will initially place a tax on every tonne of carbon pollution produced by hundreds of the country’s major emitters.

Uphill Battle to Save Australians From Execution

By Stephen de Tarczynski
Any Australian government efforts to have two of its citizens spared from the death penalty in Indonesia have been made more difficult by past refusals to intervene on behalf of three Indonesian Islamists in the lead-up to their executions in 2008.

By Stephen de Tarczynski
Many countries view nuclear energy as a way to meet growing electricity demands without releasing large amounts of greenhouse gasses. And as a major uranium exporter, Australia is keen to capitalise on future opportunities despite the ongoing nuclear emergency at Japan’s Fukushima reactors.

By Stephen de Tarczynski
When an outbreak of dengue fever occurred in the hot and humid north of Australia’s Queensland state in late 2008, Nicola Strange was among hundreds of locals that contracted the mosquito-borne disease.

Q&A: ‘Wherever There was Injustice, William Stood Up’

By Stephen de Tarczynski
More than 70 years ago, an elderly Aboriginal man led the only known privately- organized demonstration against Kristallnacht (Night of the Broken Glass), the mass anti-Jewish pogrom across Germany and Austria.

By Stephen de Tarczynski
Environmentalists here are on the verge of a significant victory in their efforts to reduce Australia’s greenhouse gas pollution, as the Victorian state government negotiates with the owner of the country’s "dirtiest power station" to shut down the coal-fired facility.

By Stephen de Tarczynski
Ken Wyatt stood, draped in a traditional kangaroo-skin shroud. In a voice wavering at times with emotion, the only indigenous Australian ever elected to this nation’s lower house of Parliament presented his inaugural address.

By Stephen de Tarczynski
As the Australian government steps up its efforts to establish a regional processing centre for asylum seekers in East Timor, refugee advocates remain watchful for signs that any deal could result in the involuntary removal from Australia of people seeking protection here.

AUSTRALIA: Solar Energy Gets a Boost, But Offers Much More

By Stephen de Tarczynski
Proponents of renewable energy say that a planned large-scale solar power plant in Australia’s northern Victoria state, which will produce enough output to provide electricity to 60,000 homes, is just a fraction of what could be achieved if federal and state governments were fully committed to harnessing solar energy.

By Stephen de Tarczynski
Late on a hot summer morning in January 2008, 46-year-old Aboriginal elder Mr Ward climbed into the back of a prisoner transport van for the 360- kilometre, four-hour journey from the small Western Australian goldfields town of Laverton to Kalgoorlie, a larger mining centre, where he was due in court to face drink driving charges.

By Stephen de Tarczynski
In early July, whales from the world’s largest population of humpbacks began arriving in the warm, subtropical waters off Australia’s north-west coast to breed and nurse their young.

By Stephen de Tarczynski
The high-profile case of an accused Australian paedophile in India and the recent arrest of an Australian man on child sex charges in Thailand represent just the "tip of the iceberg" when it comes to Australians involved in child sex tourism in the Asia-Pacific, children’s rights advocates here say.

By Stephen de Tarczynski
Australia’s newly appointed prime minister, Julia Gillard, has hardly warmed her seat, yet she has already been urged to take action on climate change.

By Stephen de Tarczynski
The lack of debate here concerning Australia’s military involvement in Afghanistan is unlikely to change in the near future despite the recent deaths of five Australian Defence Force (ADF) personnel in the war-ravaged nation.

By Stephen de Tarczynski
Geraldine Martin, Sara Stilianos, both 20, and Erin Murphy, 24, are like many young Australian women: bright, articulate, well presented, they have high hopes for their futures. Yet all three are homeless.
Next Page »
ADVERTISEMENT ADVERTISEMENT