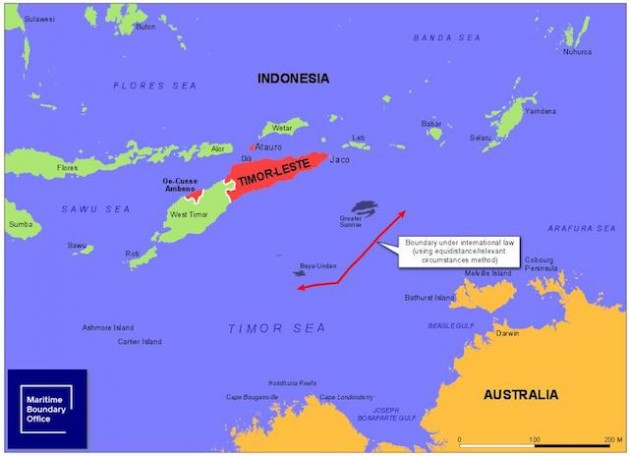 Timor-Leste wants the permanent maritime border between itself and Australia to lie along the median line. This would give sovereign rights to Timor-Leste over the potentially-lucrative Greater Sunrise oil and gas fields. Source: Timor-Leste's Maritime Boundary Office

MELBOURNE, Australia, Feb 27 2017 (IPS) - Juvinal Dias has first-hand experience of mistreatment at the hands of a foreign power. Born in 1981 in Tutuala, a village in the far east of Timor-Leste, Dias’ family fled into the jungle following the 1975 invasion by Indonesia.

It was during this time, hiding from the Indonesian military, that his eldest sister died of malnutrition.

Widely seen to be central to the maritime boundary issue with Timor-Leste is the potentially-lucrative Greater Sunrise oil and gas fields, reported to be worth some 30 billion dollars.

Speaking to IPS from Dili, Timor-Leste’s capital, Dias told of how “the struggle” against the Indonesian occupation had intertwined with his own family’s history. “I heard, as I grew up, how the war affected the family,” he says.

Dias’ father fought against the occupation with FALANTIL guerrillas, the armed wing of FRETILIN (Revolutionary Front for an Independent Timor-Leste) before surrendering in 1979. Up to 200,000 people are believed to have been killed by Indonesian forces or died from conflict-related illness and hunger during the brutal 1975-1999 occupation.

“People saw the Indonesian military as public enemy number one,” says Dias, now a researcher at the Timor-Leste Institute for Development Monitoring and Analysis, known as La’o Hamutuk in the local Tetum language.

But things have changed. Dias says that it is now Australia that provokes the ire of the Timor-Leste public, who regard their southern neighbour as a “thief country” due to its behaviour towards Timor-Leste over disputed territory in the Timor Sea.

Timor-Leste has long-sought a permanent maritime boundary along the median or equidistance line, as is often the norm in such cases where nations’ Exclusive Economic Zones overlap.

For Timor-Leste’s government, concluding a maritime boundary with Australia is linked to the young nation’s long history of subjugation, including its centuries as a Portuguese colony, its occupation by Indonesia and its treatment by Australia.

“The achievement of maritime boundaries in accordance with international law is a matter of national sovereignty and the sustainability of our country. It is Timor-Leste’s top national priority,” said Timor-Leste’s independence hero Xanana Gusmão last year. 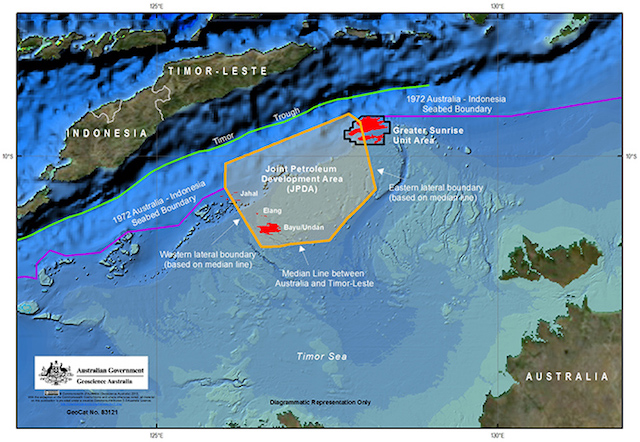 Australia argues that its permanent maritime boundary with Timor-Leste should be based on Australia’s continental shelf, like that of the 1972 Australia-Indonesia seabed boundary. Source: Australia’s Department of Foreign Affairs and Trade

Australia, for its part, has repeatedly avoided entering into such negotiations. Instead, it has concluded a number of revenue sharing deals based on jointly developing petroleum deposits in the Timor Sea with both an independent Timor-Leste and Indonesia during the occupation years.

Australia argues that any border with its much smaller neighbour be based on Australia’s continental shelf, which extends well into the Timor Sea, and should therefore be drawn much closer to Timor-Leste. Australia has taken a hard-nosed approach over border negotiations for decades with nations to its north.

Widely seen to be central to the maritime boundary issue with Timor-Leste is the potentially-lucrative Greater Sunrise oil and gas fields, reported to be worth some 30 billion dollars. If the median line was accepted by both sides, Greater Sunrise would likely fall within Timor-Leste’s jurisdiction, potentially providing one of the poorest nations in the region with much-needed revenue.

However, under current arrangements based on a 2006 deal, Australia and Timor-Leste have agreed to equally divide revenue from Greater Sunrise.

But this deal is set to expire on April 10 following Timor-Leste’s January notification to Australia that it was withdrawing from the treaty. Timor-Leste had been calling for this agreement to be scrapped following the 2012 revelations by a former Australian spy that Australia bugged Timor-Leste’s cabinet rooms in 2004 to gain the upper-hand in the bilateral negotiations that eventually led to the 2006 treaty.

Australia has also been criticised for a 2013 raid on the offices of Timor-Leste’s Australian lawyer in which sensitive documents were seized.

While Timor-Leste took Australia to the International Court of Arbitration in April last year in the hope of forcing Australia to settle on a permanent maritime boundary, Australia’s 2002 withdrawal from compulsory dispute settlement procedures under the United Nations Convention on the Law of the Sea meant, according to the Australian government, that Australia was not bound by any decision made by the court.

But in a significant development, Australia announced in January that it would seek to establish a permanent maritime boundary with Timor-Leste by September this year.

Ella Fabry, an Australian activist with the Timor Sea Justice Campaign, says that Australia now has an opportunity to go some way in righting the wrongs of the past by negotiating in good faith with Timor-Leste and agreeing to a border along the median line.

“For Timor-Leste, it could mean literally billions of dollars of extra funding for them that could then go on to fund health, education [and] all of those things that a developing country needs,” she says.

Investment in such areas is indeed needed in Timor-Leste. According to global charity Oxfam, 41 percent of Timor-Leste’s population of 1.13 million people live on less than 1.25 dollars per day and almost 30 percent do not have access to clean drinking water.

Australia’s foreign affairs department identifies high maternal mortality rates and poor nutrition – leading to stunted growth in half of all children under five years – as being among key areas of concern.

Whether negotiations eventually lead to the financial windfall for Timor-Leste that some are predicting remains to be seen. A maritime boundary agreement along the median line is far from certain and there are serious concerns over the viability of a gas pipeline connecting Greater Sunrise to Timor-Leste, not least because it must cross the three kilometre-deep Timor Trough.

For Juvinal Dias, what often gets overlooked in the maritime boundary dispute is his nation’s over-reliance on income from petroleum resources, which, he argues, has led to a lack of investment in the non-oil economy.

“The oil money has dominated everything in Timor-Leste,” he says.

Timor-Leste has earned more than 12 billion dollars from its joint petroleum development area with Australia. It set up a petroleum fund in 2005, the balance of which was 15.84 billion dollars at the end of 2016, down some 1.3 billion since its peak in May 2015.

According to La’o Hamutuk, Timor-Leste’s oil and gas income peaked in 2012 and will continue to fall, with the Bayu Undan field expected to end production by 2020. It has also warned that if current spending trends continue, the petroleum fund itself will run dry by 2026.

This is a serious concern in a country where petroleum revenue has provided some 90 percent of the budget, leading to what Dias describes as “a very dangerous situation”.

He says that while there is a growing awareness in Timor-Leste about the importance of diversifying its economy, there is no time to waste.

“If we can’t manage our economy today, the poverty will be even worse in the next decade,” says Dias.