RIGHTS-CUBA: “Going to the Police Never Crossed My Mind”

HAVANA, Jun 4 2009 (IPS) - Mercedes Toyo has finally started to smile again after many years of tears and violence. But the bad memories linger. “Now I’m being courted by a 50-year-old man who tells me I’m too wary, that I don’t let anyone get too close,” she told IPS in the living room of her house. 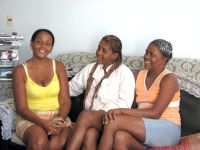 Her story is no different than that of other battered wives or girlfriends. While gender equality and the protection of the family are guaranteed by the constitution and a number of laws in Cuba, abuse that occurs in the privacy of the home is more often than not shrouded by a cloak of fear and prejudice, and goes unreported and unregistered in the statistics.

“Going to the police never crossed my mind. It would have only made things worse. Besides, nobody went to the police. It was just something that stayed in the family,” says a 55-year-old professional who suffered the same painful experience in her first marriage. Toyo — who is ten years younger — finally decided to go to the police after a particularly violent incident in which she actually feared for her life.

“I started standing up to him, and I would get really worked up too. On that particular day, I slapped him. The policemen just laughed at that and told me that I could file charges, but that so could my husband, ignoring the fact that he was going to attack me with a machete. The police have to show greater concern and carry out real investigations into these cases,” she said.

Toyo and her sisters Beatriz and Esperanza said that having a telephone hotline, like those already implemented in Cuba for drug abuse or AIDS cases, would be a great help for domestic violence victims. “And it would also be a good idea for police stations to have a special department with personnel trained to deal with these situations,” Esperanza Toyo added.

The three women also agreed that it would be important to have shelters similar to those available in other countries, where battered women can find a safe place to stay with their children when they feel threatened. They are aware, though, that any project aimed at establishing such shelters would be mired by the country’s critical housing shortage.

Cuban sociologist Clotilde Proveyer, a professor at the University of Havana, acknowledged that drug and alcohol abuse and economic difficulties are factors that “trigger” violent behaviour. “But the root cause of this social problem has to do with relationships of power and control,” she said.

According to the expert in gender issues, “women as a social group have been subordinated to male power, and that is where the most important cause of gender violence lies: in the use of violence as a means of patriarchal control.” That is why she believes that education is an essential tool for eradicating such behaviour.

Without official statistics it is difficult to estimate the extent of the problem. “I would say it’s not as severe as some claim, but neither is it as insignificant as we’d like it to be,” Yamila González Ferrer, a lawyer who holds a master’s degree in sexuality studies and is the secretary of the national executive board of the Union of Cuban Jurists, told IPS in an interview.

At an international symposium on violence in the culture of Latin American and Caribbean women, organised by the Cuban cultural institution Casa de las Américas in February 2008, Proveyer, for her part, contributed revealing data gathered by academic researchers.

The expert noted that 70 percent of all women who are murdered in Cuba knew their assailant, and said that “because they are not classified separately, many gender-related crimes are recorded as general offences.”

As a result, she said, “they are made invisible.”

According to Proveyer, 50 percent of all women murdered by men are killed by their husbands, and 60 percent die as a result of their relationship with a man they were or had been romantically involved with. Fifty-two percent of these deaths occur in the victim’s home.

“Even if there were only one case, we would have to address the issue as a matter of principle,” González Ferrer said. She, like Proveyer, is a member of the Task Force for Preventing and Combating Intra-Family Violence, created in September 1997 to combine the “aims and tasks” of the various institutions that work in gender-violence-related matters.

For Proveyer, the important thing is that today more people are aware of the problem. “It’s slightly more visible now precisely because efforts are being made to raise awareness,” she said. She added that it has been an ongoing concern of the non-governmental Federation of Cuban Women.

The Federation, created just after the 1959 victory of the Cuban revolution, coordinates the work of the members of the intra-family violence task force, which includes several ministries, the National Centre for Sex Education, the University of Havana, the Cuban Institute of Radio and Television, and the People’s Supreme Court, among others.

The task force is currently working on drafting a new Family Code and improving the Criminal Code, amended between 1997 and 1999 with the incorporation of crimes such as sexual abuse, which includes sexual harassment, and the elimination of any reference that could be interpreted as a form of discrimination on the basis of sexual orientation.

The amended code also stipulates that if “the assailant is the victim’s spouse or is related to the victim in up to the fourth degree of consanguinity or to the second degree of affinity” such condition will be considered an aggravating circumstance.

Under the new article, “this aggravating circumstance is only taken into account in crimes committed against a person’s life or physical integrity or against the normal development of sexual relationships, family, childhood and adolescence.”

González Ferrer says this amendment is “vital, because all violence against a family member must be considered as a matter of principle an aggravating circumstance with respect to the offender’s criminal responsibility, due to the implications that such actions have for the normal and proper development of the family.”

According to the expert, the task force has deemed that a specific intra-family violence law is unnecessary “at this time,” and, instead, they have decided to continue working on “fine tuning” the existent legislation and focusing on training police officers, judges, doctors, educators, and other personnel that deal with the problem.

“Laws by themselves are not the solution. If they are not enforced, if they have no effect on reality, they’re useless,” González Ferrer said. “This is why we insist on training any personnel involved in these issues, which not only affect women, but every member of the family, and also on raising awareness among society.”

Academic studies, for their part, have concluded that because of their social awareness Cuban women react “more forcefully” against gender violence than women in other countries, even though they are still not fully informed, especially with respect to their legal rights.

These studies note that the public at large is unaware of the changes introduced in the legislation, and that such ignorance is detrimental to preventing and combating such crimes. “No woman should allow a man to lay a hand on her, but if she knows her rights and the law, then she has a better fighting chance,” said the eldest Toyo sister, Beatriz, who has been married for 20 years in what she described as a happy, albeit not perfect, marriage.