JAMBALÓ, Colombia, Aug 28 2009 (IPS) - One night in February 1988 in the native Nasa territory of Jambaló, in southwest Colombia, soldiers barged into Etelvina Zapata’s home and snatched her 21-year-old son, barefoot and clad only in shorts, accusing him of working with the leftwing guerrillas. 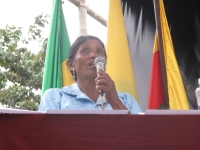 Etelvina Zapata addressing the ceremony in which the state admitted responsibility for her son's murder. Credit: Nicole Karsin/IPS

Since then, the 63-year-old mother, grandmother and great-grandmother has not rested. Against all odds, including sleeping in the mountains because of death threats, she and her family have courageously denounced the torture and extrajudicial execution of her son Germán Escué Zapata.

At 21, Germán was already a leader in the movement to recover land that was illegally occupied by large landowners, launched in 1971 with the creation of the Regional Indigenous Council of Cauca. He was also a traditional authority in the indigenous government of Jambaló, in the province of Cauca.

When Zapata and her family found Germán’s tortured corpse ridden with three bullets on the outskirts of their village, the army maintained that he had been killed in the crossfire during fighting with the insurgents. Less than a month after Germán’s killing, the case was presented to the Inter-American Commission on Human Rights (IACHR).

More than 21 years later, Zapata and her family finally received the acknowledgement they had risked their lives to obtain. On Aug. 21, in the village of Vitayó where Germán was born, murdered, buried, exhumed and reburied, the Colombian government accepted responsibility and apologised to the family and community for slaying their son and leader.

“I had to leave my country to get justice for my son,” said Etelvina, scurrying around her patio to finish cooking the massive meal of meat, potatoes and rice being prepared for thousands of guests and indigenous guards who arrived in colorfully painted “chivas” (buses) to witness the public apology.

At the ceremony, one leader of the National Indigenous Organisation of Colombia (ONIC) pointed out that the government’s public apology was not a voluntary act. It came only after a 2007 order issued by the Inter-American Court on Human Rights.

“Since the very night our compañero was shot, they knew who did it. And only 21 years later is justice arriving, and only because the international community has intervened. Is that the government’s political will? Is this the development of the rights of indigenous peoples that Colombia is praised for before the international community?” ONIC councilman Darío Mejía asked.

In January 2007, Zapata and her granddaughter Miriam, who was nine months old when her father Germán was killed, were key witnesses as the Inter-American Court deliberated the case against the state of Colombia.

According to Nasa cosmology, the natural harmony is upset when a person’s remains are removed from the sacred land once they have been buried. In her testimony, Zapata told the judges that it had been five years since the Colombian attorney general’s office had exhumed her son’s remains. However, despite her traveling to Popayán, the Cauca provincial capital, on several occasions to retrieve them, the government had failed to return them for reburial.

Three months after the hearing in Costa Rica, Jambaló’s spiritual leaders used branches to sprinkle buckets of sacred water in a community ritual to welcome, re-harmonise and bury Germán’s remains once again in his native land. And Zapata was once again able to pay homage to her son at his gravesite.

In August 2007, the Inter-American Court ruled that the Colombian government was responsible for the army’s torture and killing of Escué Zapata.

The sentence stipulated several reparations that the Colombian government must make to the family and the community.

These include bringing the perpetrators to justice; publishing the Court’s sentence in Colombian papers in Spanish, as well as the Nasauye language; holding a public ceremony admitting responsibility; establishing a community fund in Jambaló in Escué Zapata’s name; providing health and psychological services to his family members; and paying for the higher education of Miriam Escué.

In 2008, three members of the army were finally sentenced to 18 years in prison for murdering Escué Zapata – less time than the family spent searching for justice.

Last week, in the midst of the Andean mountains laden with coca crops, three rings of security run by the unarmed indigenous guards frisked the several thousand people and Vice Minister of Interior and Justice Vivian Manrique made the apology on behalf of the Colombian state.

“This is a symbolic act of the state to recognize its errors despite the time passed,” Manrique said, standing beside two indigenous guards as she addressed the crowd. “Today, on behalf of the Colombian government and the President, Alvaro Uribe, we ask pardon for acts that should have never occurred, violent acts that led to the death of an indigenous community member.”

I traveled to the conflict-ridden region to film the closing scene of “To Be Dust in Our Land”, a documentary that follows the case of Germán Escué Zapata and his family’s search for justice.

As a journalist who has covered Colombia for seven years, I was struck by how the story is symbolic of the past and present persecution faced by the indigenous movement when they organise to reclaim their ancestral lands.

The Escué Zapata family have been “guerreros” (fighters) in the land occupation movement since it began in Cauca in the 1970s, aimed at curbing the encroachment of large landholders as they displaced local indigenous communities, pushing them farther and farther up into the mountains.

Today, more than 30 years later, the movement continues in southern Colombia, as does the extrajudicial killing of its leaders.]

When U.N. Special Rapporteur on extrajudicial executions Philip Alston visited Colombia in June, he said the crime was an example of a systematic practice employed by the Colombian government and public forces.

“It should be noted at the outset that killings by these actors disproportionately affect rural and poor populations, indigenous people, Afro-Colombians, trade unionists, human rights defenders and community leaders,” he said in his findings.

“What was not mentioned is that this practice is not a new thing. It is historic, and the case of Germán Escué is one of many that continue to clamour for justice,” said ONIC leader Mejía during the ceremony.

During the last two years in Colombia, the army, far-right paramilitaries and guerrillas have killed 156 indigenous people, 68 so far this year alone. Twelve of them were Awa Indians – including four children and three adolescents – who were massacred on Aug. 26 in the southern province of Nariño.

“As the indigenous movement we need to make the state respect us. They say these are mistakes, that it was all a mistake, but we cannot accept impunity,” Germán’s father Mario Escué told the crowds of Nasa people during the ceremony.

“This should help all the indigenous people open their eyes. Even though it cost us a lot to get here; sometimes we couldn’t sleep, thinking about it,” he said, pointing out that despite being illiterate, he and his wife were able to achieve justice for their son’s murder.

Miriam Escué, who is now 22 years old, opted not to speak at the ceremony, in part because the government has not yet lived up to its duty of paying for her college education. She did, however, speak to IPS, saying “that although my family can rest a bit after this event, we need to continue struggling for other leaders who have been assassinated.”

As the ceremony came to a close, Etelvina, sporting a powder blue dress, spoke her words of wisdom as a mother and community elder.

“This is a bit of history that we impart, not just to our family, but to the entire community and to other indigenous communities too. This is what I wanted, that this be made public,” she told the government representatives, local news cameras and mostly Nasa guests congregated under a black plastic awning. “This is what I sought in memory of Germán.”

*The author is a journalist and filmmaker who has covered Colombia for several years for different media outlets. She is producing and directing the documentary “To Be Dust in Our Land” on the case of Germán Escué Zapata.