BARRA MANSA, Brazil, Oct 31 2009 (IPS) - For the past 43 years, biologists Edna and Luiz Toledo have not waited for the garbage truck to collect their trash. Their three-storey house is in fact made out of “garbage”, from the floor to the roof. Items that others would see as worthless are, in their eyes, valuable raw material. 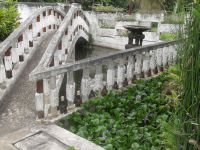 The recycled "Bridge of Sighs" over a pond of treated water. Credit: Fabiana Frayssinet/IPS

Edna welcomes us to her “Recycled House” in the town of Barra Mansa, some 150 kilometres from Rio de Janeiro, with a breakfast that includes jam made from banana skins, another from pumpkin pulp, and a pie made from cabbage stems.

The remnants of the breakfast go into a ceramic container, a “decomposer”, made by Luiz, in which organic waste breaks down until it becomes a natural fertiliser for their organic garden.

A bird with shiny black and white feathers pecks at the worms in the fertiliser to feed her chicks.

Which parts of the house are not garbage? Tierramérica asks. “Garbage?” exclaims a surprised and somewhat offended Edna. “Nothing here is garbage. Everything is put to use.”

It was Luiz who, concerned about the things that went to waste in normal households and the country’s enormous housing deficit, had the idea of building cheaply by using recyclable leftovers.

What looked like a “madman’s utopia” – at a time when nobody was talking yet about global warming or greenhouse gas emissions from garbage dumps – gradually became a reality: a three-storey home.

At first, one has the impression of being in the candy house of the Hansel and Gretel fairytale. But here the bricks are plastic bottles that once held soft drinks, and the curtains to keep out the bugs are made from braided candy wrappers.

In the garden is the “bridge of sighs”, made from rubble and columns of glass bottles that reflect the morning sun on a bucolic pond of crystalline water. One would never guess that the pond is filled with treated water from the sewer system. The floor of the garage is covered with pieces of used tires to hold the soil in place when it rains.

The only things for which the couple utilised commercial construction materials are the beams and columns that make up the house’s basic structure, because it was a question of safety. But don’t be surprised if Luiz, the prolific inventor, discovers a way to replace the reinforced concrete.

The rest – 90 percent of the house – is made from recycled materials. The walls are a mix of rubble, sand and a little cement, as a substitute for bricks.

Luiz experimented with different techniques and materials instead of plaster on the walls. Some walls have a mixture of manure – from a milk-fed lamb, as a sign points out – while others are covered with recycled cardboard or polystyrene.

The tiling is made from colourful bottles. There are beautiful mosaics in the forms of animals, made from pieces of broken glass, including a multicoloured pheasant.

Luiz also researched different types of ceilings: some are made from a mixture of water, dry leaves and shreds of carbon paper, while others are covered by tiles made from a paste of recycled milk cartons.

Some of the house’s floors are scraps of marble, discarded by factories and construction sites, and others are made out of plastic bottle caps and the bottles themselves.

These unconventional building materials have the advantage of additional comfort. In this warm climate, they provide good insulation, keeping the Toledos’ home cooler than others.

Inexpensive, aesthetically pleasing, practical as well as self-sustainable: the cost of building the house was 70 percent less than one built with traditional construction materials.

Architect William Monachesi, on a visit to the Recycled House, calls it “spontaneous architecture,” a global trend in which “people with specific housing needs take the initiative to build their own homes, mostly with recycled material.”

Nearly every day, the house receives visits from people interested in learning about the Toledos’ unusual building techniques.

The couple organised a cooperative of garbage collectors in the Volta Redonda zone, also located in Rio de Janeiro state, and they buy everything that their neighbours throw out. “We sell it on the market. The system is self-sustainable,” stresses Edna.

One neighbour, an impoverished widow, is not only better able to provide for her children, but has used her “garbage” income from the Toledos to buy a refrigerator and television set, says Luiz.

When Edna and Luiz moved to this neighbourhood, there were 12 cases of dengue fever per year. No more, says Edna. By selling the Toledos their cans, plastic containers and old tires, the neighbours have “cleared out their patios” so there are no longer any breeding sites – no standing water – for the mosquitoes that transmit the disease.

The Recycled House’s decorations also come from the trash: broken fans and coffee makers are transformed into lamps, and pieces of mirror, ceramics and statues in this house look as if they should be in a home decorating magazine.

Luiz takes us to see his latest project, on the adjacent land situated at the top of the hill where they live. To reach the top, one walks up a sort of ramp built from remnants of wood and iron.

The Self-Sustainable Integrated Rural Eco-Condominiums are a grouping of 20 houses, with common spaces like a kitchen and laundry, all built from what others consider trash.

A children’s playground has already been constructed, including a mosaic-tiled pool, with sea-themed pictures made from small pieces of bottle glass. The pool is fed by a natural spring.

The aim is to live according to his “eco-solidarity” philosophy, says Luiz. For that reason, the condominiums will only accept those who follow these ideas and understand that here the only thing disposable is the garbage can itself.