PHNOM PENH, Oct 28 2009 (IPS) - Mey Chamnan has learned the hard way about the global economic crisis. Both she and her husband were fired from their 50 U.S.-dollar a month jobs in a local garment factory after declining overseas orders caused huge job losses across Cambodia’s garment industry. 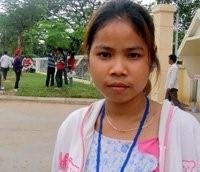 Mor Kim, 18, came to the capital last year to work in the garment sector. Such a decision generally has little to do with the economic crisis, says an education official. Credit: Vandeth Dararoath/IPS

They were not the only ones in their family to be affected. As neither of them had an income, they were forced to send their eight-year-old son back to the province to live with her parents while they tried to find other work. So far they have not succeeded.

There are plenty of anecdotal stories like Mey Chamnan’s that show the global economic downturn has affected Cambodians. But anecdotes do not provide wider answers: how the country’s youth – those under the age of 18 like her son – have been affected by the global economic crisis.

On one key measure – education – the surprising answer seems to be: Not that much. On another – nutrition – the experts say it is too early to say.

The worldwide financial crisis has caused huge damage to Cambodia’s tourism, garment manufacturing and construction sectors. Those sectors comprise three of the South-east Asian kingdom’s four economic pillars and the bulk of its economic growth over the past decade. Tens of thousands of people have lost their jobs in the past 16 months or are not earning as much.

Less money means families must either spend less or try to earn more, possibly by pulling their children out of school and putting them to work. The key concern for the United Nations Children’s Fund (UNICEF) was whether the education and nutrition rates of Cambodian children were affected.

To check the effect on education, UNICEF undertook two assessments of children in vulnerable areas in six provinces in which it operates. Peter Leth, a monitoring and evaluation specialist at the U.N. agency, says the results indicate the global financial meltdown has not caused children to be pulled out of school.

“The children who were identified as being regularly absent from these schools were not absent because of the food crisis or [the global economic crisis],” says Leth. “It was more a chronic situation – you could say it’s more attributable to chronic poverty or chronic issues in the family.”

UNICEF’s findings chime with figures from the Ministry of Education. They show the percentage of children quitting school in Grades 10 to 12 – those aged between 15 and 18 and therefore most likely to be put to work – has hardly changed over the past three academic years.

Although the actual number of children who quit school across those three grades increased to 14,000 in the most recent academic year, 2008-2009, the percentage remained at 4.8 percent – since the number enrolled in those three years rose to 292,000.

Primary school education has not been affected either, says Phan Sokim, the director-general of the department of youth at the Ministry of Education. Overall, he thinks that the global economic crisis has not affected youth education.

That seems accurate on a national level, but on an individual level it has certainly affected some, as 18-year-old garment factory worker Mor Kim knows. A year ago she came to Phnom Penh from Kampong Thom province in central Cambodia to work at a garment factory – one of more than 300,000 people once employed in the sector.

Mor Kim rents a house with three friends. She says the rent recently increased from 40 to 50 U.S. dollars a month, which added 2.50 U.S. dollars to her outgoings. That may not sound like much, but she only earns 50 U.S. dollars each month, and on top of that food prices rose sharply last year, catching her in an economic vice.

The result was that she could no longer afford to send money to her home province to support her parents and 16-year-old brother who had recently finished Grade 9.

“Because of the effects of the global economic crisis I couldn’t afford to pay for myself and my family, so I had to ask my brother to come to Phnom Penh and work with me in the factory,” she says. “He has been working here now for a fortnight.”

Phan Sokim of the Ministry of Education maintains that such decisions generally have little to do with the economic crisis. “Don’t blame the global economic crisis – the young people want to come to Phnom Penh because they want to enjoy life,” he says. “It is different from how life is in the countryside.”

While there is some truth in the attraction of the bright lights of the capital – Mor Kim admits her brother was not particularly upset about starting work – the unwelcome end of his formal education will probably harm his future prospects.

At the office of the International Labour Organization (ILO) in Phnom Penh, chief technical adviser M.P. Joseph says there are good reasons why school enrolment numbers are largely unaltered. A recent ILO study found Cambodians are culturally highly aware of the importance of education and are very reluctant to pull their children out of school.

“Ordinary poor people … respect education [and] they respect learning,” says Joseph. “Therefore one of the last acts in coping with an economic crisis when it starts directly hitting their family is to pull the child out of school if the child is already in school.”

But Joseph sounds a note of caution.

“Just because there is no impact now, it doesn’t mean there won’t be an impact [in the future] if the crisis continues,” he says. “So if the impact continues and the negatives of that start impinging on the family, this will happen. The fact that it has not happened now is certainly not a guarantee it won’t happen in the future.”

If the effect on education is so far unremarkable, what of the impact on nutrition?

“Wasting – which is your weight for your height – is a very short-term indicator, because you can imagine if you don’t eat for one week or two weeks, your weight might go down, but of course your height will be about the same,” says Leth. “So wasting can fluctuate very quickly. Stunting and underweight are more long-term, or what we call ‘chronic measurements of malnutrition’.”

Looking at the possible effects of the global economic crisis on wasting, UNICEF found that progress on reducing the prevalence of wasting had stagnated between 2005 and 2008, when the last measure was taken, at around 8.5 percent. That came despite progress made in the first half of the decade when the rate was cut in half.

But Leth says the reasons behind that stagnation are unclear.

“I would say that is a concern, but we cannot say that it is attributable to the economic crisis,” he says. “It is a concern that it [has come] at the same time as the crisis, and therefore it’s possible that there’s some link, but really we need more data – a more qualitative understanding of the situation in order to find out the direct cause of this trend.”

Leth adds that data will be gathered next year when the country’s five-yearly Cambodian Demographic Health Survey is compiled. If the survey shows that the trends are continuing to improve, then, says Leth, “there is not very much to be worried about”. But only then will the experts know for sure whether the global economic crisis has had a significant impact.