ISTANBUL, Nov 23 2009 (IPS) - Fifteen years after the International Conference on Population and Development (ICPD), the glass is half full, according to Purnima Mane, deputy executive director of the U.N. Population Fund (UNFPA). And not much better for the U.N. Convention on the Elimination of all Forms of Violence Against Women (CEDAW) after 30 years. 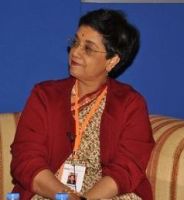 Purnima Mane: "Violence against women goes up when they are pregnant. It's heinous." Credit: UNFPA

The ICPD, hailed as an epochal gathering of 179 nations in Cairo bent on bestowing rights and dignity to women, came under review at a high-level meeting in Istanbul, Nov. 11-13, that also took up the status of the Millennium Development Goals (MDGs). These pertain to women.

A report on maternal health in the 20-nation Eastern Europe and Central Asia region showed that maternal mortality has been halved since 1990, from 51 per 100,000 live births to 24.

But the goal of 75 percent reduction by 2015 as targeted in MDG-5 is unlikely to be reached in Albania, Armenia, Georgia, Kazakhstan, Kyrgyzstan, Russia, Tajikistan and Uzbekistan, according to U.N. population experts.

In fact, MDG-5 is lagging behind more than the other MDGs.

Amid some progress and cautious optimism, there are sobering facts. UNFPA figures show that one woman still dies every minute during pregnancy or childbirth, 90 percent in Asia and Africa. The lofty goal of Universal Access to Reproductive Health by 2015 is still far off and unlikely to be achieved.

And women are still subject to violence almost everywhere 30 years after CEDAW. The Istanbul meetings also received a UNFPA report on violence against women in the region showing that one woman out of three still experiences abuse in her lifetime.

Why? What worked, what failed? And the road ahead?

Mane outlined her assessment in a Q&A interview with IPS after the Istanbul meetings. Excerpts from the interview follow:

IPS: What is your assessment of UNCPD after 15 years PURNIMA MANE: Let’s say the glass is half full. We have to fill the other half.

IPS: Why is the glass half empty, then? PM: Many issues are not adequately addressed. We have not fully dealt with the basic problem. It is still thought that ICPD is about sex and abortion without realising that we are not advocating abortion for family planning but family planning to reduce abortions. Then, financial and technical resources are not adequate (U.N. estimates investment needs for population programmes in 2010 at 64.7 billion dollars. Actual investment stood at 30.8 billion dollars in 2008). AIDS became a big factor.

IPS: Any pleasant surprises in the past 15 years? PM: Yes. Changes in partnership. We didn’t imagine that faith-based organisation and youth would become such active partners.

IPS: Unpleasant surprises? PM: Still high maternal mortality. I am dumbfounded that maternal deaths (estimated at 527,000 in 1990) are pretty much the same. I had thought the subject of women was more attractive and would get more attention. Everybody wants to help children, but not their mothers.

IPS: This is also 30 years since CEDAW. Has it been a success? PM: The Convention achieved nearly universal ratification, with 186 countries party to it. It has been highly successful in focusing government attention on existing areas of discrimination within their legal systems, and creating a process to redress such discrimination. It can be a powerful tool for change, but it must be recognised as such and embraced by governments and civil society in order for it to continue to be successful. Implementation continues to be a challenge worldwide. It requires commitment by governments to gender equality and strategic effort by civil society to hold states accountable to their obligations under CEDAW.

IPS: In this Eastern Europe and Central Asia region? PM: Many countries now have draft laws before parliament. Despite these good faith efforts, there is still a need to put in place adequate legal support systems to protect survivors of violence. And there is a need to implement laws more actively. The existing anti-domestic violence laws on the books are poorly implemented.

IPS: Why does gender-based violence (GBV) still persists in many parts of the world? PM: Because it is deeply rooted in societies all over the world. Because there is widespread impunity. These crimes are not always prosecuted. And there are varying degrees of social acceptance of GBV. Also gender discrimination, lower socio-economic status and cultural challenges may often leave women and girls with few options and resources to avoid or escape abusive situations and seek justice.

Such violence is not only a violation of human rights. It is also a threat to health.

It goes up during wars and economic crises. Violence against women goes up when they are pregnant. It’s heinous.

IPS: What next? PM: MDGs will not end in the next five years. They will be reshaped. The search for universal access to reproductive health will still be around. But we don’t want to wait for another 20 years.

*This is the second of a two-part series on gender-based violence in Eastern Europe and Central Asia.