TOKYO, Dec 2 2009 (IPS) - Sachiko Yamada has been hoping to spend her retirement years traveling and living the good life. Today she devotes her time to taking care of her 90-year- old mother five days a week, leaving her with two days off while her mother goes to a care centre for the elderly. 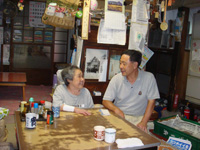 Kaoru Arai (left), 88, feels lucky that she is still healthy and lives with her son, Kiyoshi (right). Credit: Catherine Makino/IPS

“I owned my company and worked hard for many years, but now I have to take care of my mother,” said the 65-year-old Yamada. Her mother is on a waiting list for a facility providing nursing and medical care.

Not that she would rather be pursuing her own interests than being with her mother in her remaining years, but Yamada’s dilemma highlights the dearth of government-run elderly facilities in Japan—a problem brought on by a steadily aging society—and government’s apparent inability to keep up with a growing demand for elderly care facilities that are readily affordable to the average folk, especially during economic crunch.

“It used to be that families took care of the elderly, but because they live much longer now, there are more problems,” said Dr Nobuhiko Ishida, who owns clinics, retirement and care centres throughout Japan.

“There aren’t enough facilities to take care of them all, and there’s usually a waiting list to get into the geriatric hospitals.” Given the dilemma facing Japan today, Dr Ishida added, “The old are left taking care of the old due to a shortage of facilities.”

As part of its campaign manifesto, the Democratic Party of Japan had pledged to help ease the financial burden of raising children—deemed one of the factors underlying the country’s declining birth rate—by giving each child a monthly allowance of 20,000 yen (229 U.S. dollars) through middle school and raising the childbirth allowance from 380,000 yen to 560,000 yen (4,353 to 6,412 U.S. dollars).


Japan is the most rapidly aging country in the world today and has the longest life expectancy. Women can expect to live to 86 years old and men to 79. Of the country’s estimated population of 127 million, more than 20 percent is over 65 years old and only 13 percent is under 15.

No less than recently elected Prime Minister Yukio Hatoyama has expressed concern about the social and economic consequences of the trend: a growing pension and health care costs, lower saving and investment rates, and a shrinking work force. These factors combined have renewed debate on Japan’s immigration policy. Historically, because of its homogeneity, Japanese society views outsiders with suspicion.

“I think Japan should make itself a country attractive to people so that more and more people, including tourists, hope to visit Japan, hope to live and work in Japan,” he said. “I am not sure if I can call this immigration policy, but in recent years Japan has cautiously opened up its job market to nurses and care workers from some Southeast Asian countries.”

But, Hatoyama said, before addressing immigration, the government should first solve the problem of the country’s low birth rate. Based on data from the Ministry of Internal Affairs and Communications, the average number of children per family is around 1.3, and women are choosing to marry late.

The Hatoyama administration also seeks to overhaul the medical insurance system for elderly people. Health, labor and welfare minister Akira Nagatsuma said the current system for people over 75 years old would be abolished. The newly designed one would be realistic. He did not disclose any specifics, though.

In its campaign manifesto the DPJ had pledged to increase the number of doctors across Japan by a whopping 50 percent, compensate those affected by vanishing pensions and establish a system whereby every person can receive a pension. “We will provide adequate medical and long-term care services and will value every person’s life,” said DPJ.

Based on a survey conducted by Kyodo News in September, nearly 60 percent of lower house members from the DPJ believe the government should “eventually consider raising sales taxes in the future to drastically reform the pension system, a growing social welfare expense amid the nation’s declining birth rate and aging population.”

Kaoru Arai, 88, considers herself lucky that at her age she is relatively healthy and still lives with her son and daughter-in-law. She gets together with her friends a few times a week. They sing, dance, eat, drink ‘sake’ (rice wine) and talk about the good old days, she said. “We usually have it at the hot springs, so we can enjoy the baths too,” she added, beaming.

Unfortunately, Kaoru Arai makes up a segment of Japan’s aging population that does not need elderly health care services as much as Yamada’s mother does.

Dr Ishida said many of the elderly in Japan do not have a good quality of life like Arai. “Many older Japanese suffer from bad health and end up spending their time in bed,” he added. “There are about 700,000 elderly throughout Japan who are bedridden.”

The mutual support custom of families taking care of their elderly is declining and it puts more pressure on the government to care for the elderly. Social welfare has not worked because it is inadequate to meet the existing demands, given the growing elderly population and since many people cannot afford the cost of hospital services, said Ishida.

Due to sorely limited elderly care services and society’s seeming inability to adequately deal with the issue of aging, some of the elderly suffering from Alzheimer’s disease are tied to beds to stop them from getting up and walking around, he said.

He said one out of four people in Japan will become elderly soon, so the most important thing is to prevent them from becoming bedridden, getting Alzheimer’s or other diseases. The bottom line is that Japan needs to work on preventing these illnesses from middle age on, he said.

Ishida believes there is not much hope that counter measures will stop the declining population, which means Japan needs to adopt more family-friendly policies.

“For example, the [government-mandated] retirement age of 60 years is way too soon because these people are left with nothing to do,” he said. “We need to change many of our current structures and systems.” Despite the mandatory retirement, many Japanese companies allow their employees to continue working over the age of 60.

The biggest challenge for Japan will involve sustaining output growth and preventing a decline in the standards of living despite a contraction in the labour supply, according to a report by the Asian Development Bank (ADB), ‘Aging in Asia’, which was released in February.

“Education reforms will also be needed to help young adults enter the labour forces, removing barriers to the participation of women; and increasing mandatory retirement age, or scrapping it altogether,” said the report.

The ADB warned that Japan needs to reform its current structures to meet the challenges of an aging society—and that requires a big head start, it said.