BRAZIL: Battle Between Jungle and Livestock in the Amazon

RIO BRANCO, Brazil, Nov 5 2010 (IPS) - “Put yourself in God’s hands,” his mother told him just before she died. Only later did he understand that as she was dying of kidney failure, she was urging him to continue her work as a Catholic evangelist. 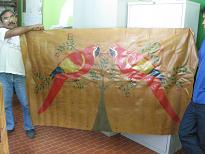 It was 1980 and they were living in the remote “seringal” — a rubber extraction area in the jungle — of Iracema in a community that was like one big family made up of dozens of adults and children surviving on sales of nuts, natural latex extracted from the “seringueira” or rubber tree, and other products harvested in the jungle.

Aldeci “Nenzinho” Cerqueira Maia was 18 years old and already married when his mother died. A rubber tapper or “seringueiro” from the age of nine, he still keeps a rubber ball he made himself when he first started working, as a kind of good luck charm.

His grandparents were among the “rubber soldiers” trucked into the Amazon jungle from the semiarid northeast during World War II to supply the Allied armies with rubber.

Later, the northwestern state of Acre began to receive a new influx of outsiders, interested not in what could be gathered from the jungle, but in knocking down the forest to clear the way for cattle and a few crops. The settlers drawn to the rainforest by the offer of land distributed by the National Institute for Colonisation and Agrarian Reform (INCRA) began to encroach more and more on the seringales.

When the INCRA started gearing up in 1986 to occupy part of the seringales to settle farmers, the rubber tappers, threatened with expulsion, joined together and developed a strategy of peaceful resistance called an “empate” or standoff, in which families — men, women, and children — would create human chains to protect the trees from the loggers’ saws.

“We managed to block the expropriation by INCRA,” said Nenzinho. But it took a long fight before the triumph crystallised in the creation of the Cazumbá-Iracema extractive reserve (Resex) in 2002.

The Resex are areas of public land where rural communities make a living from harvesting forestry products like natural rubber or Brazil nuts, and from small-scale farming, while preserving the forest and its biodiversity under the principle of sustainable use of the Amazon jungle’s natural resources. Local residents of the Resex also receive subsidised prices for their products.

The creation of the Resex was a victory of the empate movement led by Chico Mendes, the internationally renowned leader of Brazil’s seringueiros.

But the reserves were created at the cost of bloodshed. Mendes was murdered in 1988 by ranchers in Xapuri, a city in Acre state. Wilson Pinheiro, another leader of the seringueiros, had been killed eight years earlier.

The first legacy of Mendes and Pinheiro was the creation, in 1990, of the Chico Mendes Resex, which covers 970,570 hectares and is now home to some 1,800 families.

Nenzinho survived two death threats, one of which was the result of the legal complaint he brought against a police commissioner for poaching.

But he has had the constant protection and support of Paolino Baldassari, a priest from Italy who is in his eighties but still very active. The priest served as an inspiration and leader for generations of Catholic activists in the struggles of the poor in the remote town of Sena Madureira, in the Cazumbá-Iracema Resex.

Nenzinho attributes the success of the resistance by the Iracema seringueiros and of his own efforts as an activist and social leader to the religious work begun by his mother and continued by him, under his mentor Father Paolino.

“Human beings cannot live by bread alone, nor can they live by prayer alone,” Nenzinho said he learned. So he received training as a health agent and later as a nurse, in order to look after the health of his community.

As a result of his frequent visits to all of the local homes, he is now godfather to children in 56 families. “I was everyone’s ‘compadre’,” he said, referring to the important bond between the parents and godparents of a child.

But a plunge in rubber prices at the start of the 1990s began to break apart his community, as many left the seringal. Those who refused to leave founded a cooperative, and Nenzinho, using the facilities he enjoyed as an official health agent of the municipal government, transported the group’s rubber to sell in the city, saving the other families time and money.

Hauling out the rubber on animal back took almost an entire day, because there were no roads — only tracks that became slippery when it rained.

But in 1992, prices collapsed further, and “there were no buyers,” Nenzinho said.

In an attempt to keep the community from falling completely apart, he invited 10 families to join him in a Brazil nut business, which was providing his family, who lived next to a stand of Brazil nut trees, with an income.

Since the Brazil nut harvest lasts only from January to March, the families also planted rice, beans, banana trees and other food crops. “It was hard” to get the rubber tappers to change their eating habits, as they were used to depending largely on meat from animals they hunted. “We had to learn to eat other things. I had to ‘domesticate’ myself, too,” he admitted.

Another triumph was the opening of a road leading to the Resex, “a mission impossible that was achieved,” Nenzinho said. “In 1997 the first vehicle drove up, amidst tears of happiness” on the part of people in the community, he added.

“Transportation is everything,” he said. However, the rains make the dirt road muddy and impassable for most of the year.

Cazumbá-Iracema was also “the first extractive community in Acre to have a high school,” he said proudly.

“I was born here and I founded the school in 1993,” she said, underscoring that young people “want to stay here,” unlike the children of peasant farmers in surrounding areas.

One example is 18-year-old Ronaldo Santos, who is thinking of studying biology in some Brazilian city and then returning to carry out research on “this forest full of mysteries.”

In 2002, the Brazilian government finally decreed the creation of the long-fought-for Cazumbá-Iracema Resex on 750,975 hectares of land.

Because of the subsidised prices paid to Resex residents, local producers now receive 3.2 reals (1.85 dollars) per kilo of rubber, 2.7 times the local market price. However, that is only one-third of the purchasing power that their incomes from rubber brought them in 1980, Nenzinho said.

Today he helps watch over the Resex as an employee of the Chico Mendes Institute for Biodiversity Conservation (ICMBio), the Environment Ministry agency in charge of the country’s conservation units, like the Resex and national parks.

The local population has grown to 320 families who are trying to diversify production in order to boost their incomes.

Besides the Brazil nut harvest and small-scale farming, they make crafts, especially using “encauchado”, a kind of latex fabric used to make different products like large wall hangings or computer mouse pads in the shape of leaves from trees that are native to the Amazon rainforest.

Natural latex is also employed in the Chico Mendes Resex to produce condoms and a product used for the soles of shoes.

But the Resex still face threats from outside encroachment. Two years ago, thousands of head of cattle were found in a huge deforested area in the Cazumbá-Iracema reserve — a violation of the laws governing the protected areas.

In the 1970s and 1980s, the INCRA created settlements of farmers in Acre, causing extensive deforestation along the roads cutting through the jungle. But it changed its approach later, incorporating an environmental perspective and gaining greater comprehension of the spirit of the Resex, said João Ricardo de Oliveira, the land reform agency’s head of planning in Acre.

Brazil’s 1964-1985 military regime was keen on opening up the Amazon to development and commercial exploitation, under the argument that the vast rainforest had to be fully integrated into the country in order to protect national sovereignty, Oliveira said.

The dictatorship also resettled in the Amazon, with no thought for the environment, thousands of people who had been displaced when hydroelectric dams flooded their land in southern Brazil, he added.

But fewer displaced persons arrived in Acre than in the neighbouring state of Rondonia, where deforestation and malaria were rampant.

Activists and local residents are now fighting for the creation of an “ecological economic zone” in Acre, and when landless farmers or others are settled in the area by the INCRA, areas of native forest are avoided, or the settlements are created in a sustainable manner, Oliveira said.

This new model will soon be tested in the settlement of “Brasivianos” (a portmanteau of Brazilian and Bolivian) — peasant farmers who have been displaced from the area along the Bolivian border. “We have a list of 417 families,” he said.