HAMBANTOTA, Sri Lanka, Nov 22 2010 (IPS) - Percy Mahinda Rajapaksa is the quintessential Sri Lankan politician – someone who senses the subtle shifts in the political landscape quickly and can turn a narrowest of victories into the strongest of legacies. 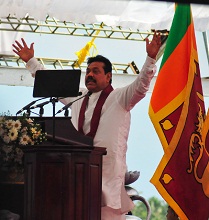 Sri Lankan President Mahinda Rajapaksa at the opening of a port in his native Hambantota district. Credit: Amantha Perera/IPS

Unlike 2005 when his victory was wafer thin at a mere 180,000 votes, this time, he had won handsomely at the January 2010 presidential race with a majority of 1.8 million votes.

The pomp and pageantry of the swearing-in ceremony was indicative of how secure Rajapaksa, 65, felt about his own legacy.

A day before being sworn in, Rajapaksa declared open the first stage of 360 million U.S. dollar, Chinese-funded port in Magampura in his native Hambantota district. It was symbolic of how Rajapaksa, a 40-year veteran in politics, has charted his last five years at the helm of this South Asian island nation and how he plans to move ahead in his second term.

They made up the front rows of the enclosures, and towards the rear of VIP section were the voters, hundreds of them, whose support had brought Rajapaksa to where he is today. They shouted in jubilation when he arrived, even more when he spoke.

They make up the backbone of Rajapaksa’s overwhelming popularity, the rural voters from the majority Sinhala population. “He is my life,” Sujith Sayakkara, a 31-year-old Rajapaksa supporter told IPS at the ceremony. He waited with his friend, a large Sri Lankan flag in hand, while his partner held up a homemade poster extolling the President. “He has delivered on what he has promised, he saved this land, this country,” Sayakkara said. “He deserves our support.”

Even before he was elected president, Rajapaksa shunned the more urbanised image of most of his predecessors. He appealed to the rural voters, told them that he was one of them. “He has done so much to villages like this. He has brought development to our villages,” Sayakkara said.

In addition to the port project, Hambantota is getting a new airport. The government is also building five new ports and rehabilitating main roads in the country’s interior and laying down new highways. Rajapaksa has also initiated moves to wean back Sri Lankans to consume more locally produced rice and shift away from imported wheat-based products, primarily bread.

In his speech at the port opening, Rajapaksa reiterated his desire to keep the village at the centre of his policies. “This is not only the building of a new port but also an opportunity to develop our villages. This is a giant step taken to reverse Sri Lanka’s development history, which has so far ignored the development of villages,” he said.

When he first took office in 2005, the country was beset by a 30-year-old separatist war. Rajapaksa said his pledge then was that he would usher in peace. “On that 19th of November (2005) when I took over this country, it was divided and the Sri Lankan nation was losing this country,” he said in his first address to the nation after taking oath a second time.

The war is now over. It was over one and half years ago when on May 19, 2009, the government’s military killed the top leadership of the Tamil Tigers and captured the last bit of land under their control in Sri Lanka’s north.

Allegations of rights abuse that were raised against both government forces and the Tamil Tigers during the last phase of the war have however persisted. The government has rejected them, claiming that some were stemming from the pro-Tiger international lobby.

But there has been a price to this. The European Union (EU) this year suspended a concessionary tariff regime that gave Sri Lanka exports tax breaks of over 100 million dollars in 2008, arguing the country was contravening human rights covenants. Still, Rajapaksa has insisted he would not undermine national sovereignty and bow to international arm- twisting.

In diplomatic backrooms meantime, he has astutely garnered the support of China and India as his administration moved away from the dependence on traditional western powers. That policy is very likely to continue. “When Asia is progressing rapidly led by China and India, Sri Lanka also seeks to be a part of this emergence,” he said at the port opening.

India and China have become two of Sri Lanka’s major donors, but as Sri Lankan diplomats in Washington repeat privately, U.S. investments, especially in international bonds issued by the government, are not small.

Despite his enormous popularity, Rajapaksa has been criticised for undermining democratic safeguards by removing term limits on the presidency. But there has as yet been no clear and strong opposition challenge that has built up against him.

As the National Peace Council, a local advocacy group, put it, “President Rajapaksa’s wish to ensure that his second term of presidential office is one that ushers in an era of prosperity to the country requires that the government recognises the trends in accepted principles in the world that give primacy to the rule of law, decentralisation, sharing of power and the participation of civil society in development.”

Rajapaksa said that his main aim in his second term was fast-track economic development. “I take over this country again with the determination, strength and courage to raise my motherland to a position of greatness in the world.”

Despite criticism from other quarters, it is a pledge that voters like Sayakkara feel he will keep.