LIMA, Dec 10 2010 (IPS) - As metal prices continue to soar, the debate on a tax on windfall earnings of mining companies in Peru and an increase in the royalties they pay has been revived. 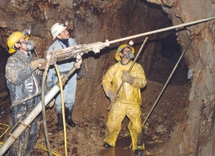 But industry lobbying and the government’s reluctance to make changes with elections just around the corner has hindered approval of two bills that would give the state a greater share of mining revenues.

“Recovering revenue from natural resources is a global debate that is picking up steam,” economist Humberto Campodónico told IPS. “In Peru, however, there are only timid attempts, because the political momentum is lacking to bring about a change, which will only be possible with another government.”

Countries like Bolivia, Ghana, Mexico and Mozambique tax the windfall earnings of mining companies, and Australia passed a similar tax this year, which will go into force in 2012.

One of President Alan García’s election campaign pledges was to impose a windfall tax on mining companies. But when he took office in 2006, his government negotiated instead “voluntary payments” by the companies during his five-year term, to go towards fighting poverty.

Observers say there is little prospect of progress towards adoption of a windfall tax, at least until the end of García’s term, in July 2011.

Despite the continuing metal prices boom, mining companies have only contributed 638 million dollars to the voluntary fund so far, and as of October, only 56 percent of the funds had actually been used to carry out development projects in communities and towns in mining areas, according to the Ministry of Energy and Mines.

The mining industry is one of the engines of economic growth in Peru, which is the world’s leading producer of silver, second producer of copper and zinc and sixth producer of gold. But the industry is notorious for concentrating wealth in a few hands.

Between 2005 and 2009, just eight companies accounted for 67 percent of the industry’s exports and 88 percent of net earnings, while their profits were 30 percent higher than the industry average.

Based on these figures, lawmaker Gloria Ramos, who represents the central region of Paco, presented a bill for a 50 percent tax on windfall earnings, defined as the difference between the sale price of the minerals and baseline prices set by the Ministries of the Economy and Energy and Mines.

The bill has the backing of left-wing groups like the Union for Peru, the third largest bloc in the legislature. But since it was introduced in June, it has been stalled in the congressional Committee on Energy and Mines.

Ramos organised a public hearing to discuss the bill in November, and next year she plans to call public meetings in the six main mining provinces, at the request of regional authorities.

Meanwhile, spokespersons for the Committee on Energy and Mines told IPS that the initiative is still under review by the ministries in question and the National Mining Association, which represents the large companies operating in the country.

The chair of the committee, Cecilia Chacón, has stated that the stability of the investment climate must be guaranteed by honouring legal contracts — a position in line with the arguments of the mining industry — and has given no indications that the bill is to be debated any time soon.

Chacón is one of the supporters of former president Alberto Fujimori (1990-2000), who is in prison on a number of corruption and human rights charges.

But time is running out. This year’s legislative session ends on Dec. 16, when Congress goes into recess until February, by which time the campaign for the April presidential and congressional elections will be in full swing.

“There is no political will, even though what is being proposed is fair: these companies are earning more and more, not as a result of their hard work, but due to favourable international circumstances,” Ramos told IPS.

“It’s a moral duty for them to distribute and share their profits with the countries where the resources are exploited,” said the legislator, who is a member of Compromiso Democrático, a social democratic party.

“The government has been incapable of coming up with a solution to this situation in over four years of government,” said Campodónico. “Now what it is doing is just a farce, a delaying tactic.”

He was referring to another bill, introduced Nov. 23 by José Carrasco of the governing Partido Aprista Peruano (PAP) party, aimed at increasing mining royalties to 10 percent for gold mines and five percent for copper mines, up from the current one to three percent, depending on the international minerals prices at the time.

The Ministry of Energy and Mines reported that it is studying the bill, while the Economy Ministry has already flatly rejected it.

The PAP unexpectedly recognised, in its arguments defending the bill, a 2004 Constitutional Court sentence that states that royalties are not a tax but a kind of quid pro quo, which means that companies that enjoy tax stability contracts are also required to pay them.

In the 1990s, Fujimori signed legal stability contracts that locked in the tax status of private firms, with the aim of promoting investment. As a result, the 10 largest mining companies do not pay royalties, and the government takes in a very small amount of revenue through this mechanism.

Jorge Manco, a professor at the San Marcos University, reported that the largest amount of royalties taken in by Peru in any given year was 174 million dollars, and that last year’s total was just 112 million dollars.

But the National Mining Association said that instead of increasing royalties, its members would prefer to expand the “voluntary payments.”

“We are concerned that at a time when we are talking about increasing investments in the country by more than 43 billion dollars, they are discussing changing the rules of the game and taxing an activity that already has a heavy tax burden,” said the president of the mining companies’ association, Hans Flury.

Manco pointed out that from 2005 to 2009, just 12 percent of the mining industry’s earnings went to royalties and other taxes, compared to 23 percent in Chile.

“Even in a country where private investment is stimulated, the state takes in a higher share of the industry’s profits,” Ramos said.