RIO DE JANEIRO, Apr 5 2011 (IPS) - The Brazilian government is tightening safety procedures at its two nuclear power stations. Although this South American country is not prone to earthquakes or tsunamis, it is not exempt from natural disasters like landslides and flooding that could jeopardise evacuation plans if a radiation leak occurred. 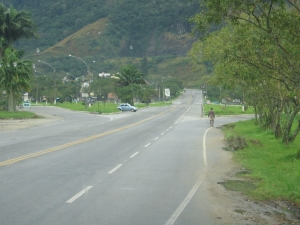 The only road to Angra dos Reis, home of the nuclear power plants, is a narrow ribbon winding between the mountains and the sea. Credit: Diana Cariboni/IPS

The government began to rethink its disaster readiness policies in January, when torrential rains caused landslides and flash floods that killed nearly 1,000 people, blocked roads and destroyed everything in their path in the hilly region of the state of Rio de Janeiro, in the southeast of the country.

Landslides are also frequent on the access roads to Angra dos Reis, where two nuclear reactors, Angra I and Angra II, that produce 2.5 percent of Brazil’s electricity, are located 170 kilometres south of Rio de Janeiro, the state capital.

Former Green Party lawmaker Fernando Gabeira warned that there are at least 120 points at risk of landslides on the narrow highway from Rio de Janeiro to Angra dos Reis and the city of Santos, which snakes between the mountains and the Atlantic ocean.

The accident response procedures “were never a good plan,” Gabeira told IPS. “I took part in a simulated evacuation, and the alarm siren didn’t work. A police officer who was going to help us get organised died in an accident. And the highway is very dangerous,” he said.

Ricardo Baitelo, head of Greenpeace Brazil’s energy campaign, wondered what would happen during an evacuation in the case of a nuclear disaster, “if traffic is already difficult at tourist seasons like New Year or carnival.” Angra dos Reis, where some 20,000 people would be at risk if an accident involving radioactivity occurred, is a fast-growing tourist resort.

The government is aware of the weak points in its nuclear plan. Eletronuclear, the state-controlled company that runs the nuclear power plants, announced in late March that it had set up a commission to reevaluate the safety of the hillsides surrounding the access routes to Angra dos Reis, and that it would hire an independent consultancy firm to carry out an assessment.

The revised plan also includes establishing alternative escape routes in case of accident, including the construction of two quays near the nuclear plants for evacuation by sea, as well as an air route.

The nuclear power station is located on the sea shore, with the hills behind it. Gabeira said the possibility of escaping by sea “is important, because it recognises that the road to Angra may be worse than useless in an emergency situation.

“But it must be understood that there are times when the sea, too, is less than friendly,” he said.

The head of the National Nuclear Energy Commission (CNEN), Odair Gonçalves, told IPS the revised evacuation plan is just one of the components of the current emergency programme, a policy that depends directly on the president’s security cabinet.

The programme is activated when the accident risk is greater than what the design limits of the reactors can cope with, and calls for preventive evacuation within a radius of three to five kilometres.

“If the accident is serious and grows in intensity, as happened in Japan, evacuation of the population can be recommended. Eletronuclear is building piers and secondary ports to act as alternative exit routes by sea and by air, in addition to the road,” he said.

The extraordinary safety measures do not rule out evacuation from broader areas, or the construction of a hydroelectric plant that would take over if the nuclear plant generators failed.

Gonçalves played down the risk of natural disasters happening in Brazil.

“The slopes of the hills have been studied sufficiently, and even with mudslides like those that occurred in Angra dos Reis, we estimate that they would not reach the power stations. Even in the case of a flash flood, the auxiliary generators are placed two and a half metres above the maximum possible limit of flooding in the area,” he said.

The government has started building a third reactor at Angra dos Reis, and is planning at least four more nuclear power stations by 2030 as part of a strategic plan that includes producing and exporting enriched uranium.

Brasilia justifies the expansion of nuclear power by the economy’s growing demand for electricity.

Over 80 percent of Brazil’s energy is provided by hydropower, but plans to expand hydroelectric sources are also under fire because of their environmental impact on areas such as the Amazon jungle.

Gonçalves emphasised that even with the planned new power plants, nuclear energy will contribute barely five percent of the country’s electricity supply.

“There is really no expansion, just maintenance of a nuclear capacity. In addition to a lot of water, we have a lot of uranium, and that is a source of wealth that has to be exploited, because of the high degree of independence it can provide, including in the technological sphere,” he said.

In Gabeira’s view, “only the government cannot imagine any other way” of supplying the increasing demand for energy. Germany, for example, “is making fast progress on solar energy,” and China is developing clean, renewable energy sources.

“If we take all the safety measures needed for nuclear energy, it will cost much more than solar energy and will end up being less competitive,” he stressed.

Brazil has tremendous potential for generating energy from renewable sources, said Baitelo, making it possible for the country “to grow into the middle of this century, with an energy demand four times what it is today, using electricity provided by renewable sources, especially wind power, biomass, some kinds of hydroelectric power and solar energy,” he said.