UGANDA: ‘So Many Innocent People Are Dying’

KAMPALA, Jun 7 2011 (IPS) - Edmary Mpagi and his cousin Fred Masembe were convicted by a Ugandan court and sentenced to death for the murder of a man who was later found alive. 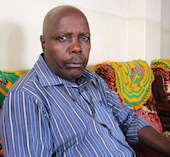 Masembe died in prison before he could face the gallows while Mpagi spent 18 years waiting to be executed by the state. Mpagi said his conviction was based on fabricated evidence by the state. He claims a pathologist was bribed to falsely testify that he had carried out a post-mortem on the body of William George Wandyaka, the man Mpagi and Masembe were accused of murdering.

Mpagi was released from prison in July 2000 after receiving a presidential pardon. He spends much of his time campaigning against the death penalty. Excerpts of the interview follow.

Q: Why are you opposed to the death penalty? A: I’m campaigning against the death penalty because there are so many people (awaiting) execution or who were executed when they were innocent. The death penalty is also cruel and barbaric in nature. There are so many people who are dying when they are innocent, for example, the poor who cannot afford legal representation. Some are accused of capital offenses because of grudges, and some are convicted because of poor police investigation. Though some commit crimes, it is better to free 99 people instead of killing one innocent one.

Q: Has your campaign yielded any results at home and elsewhere? A: Yes. I have worked with Amnesty International at the United Nations campaigning for a moratorium on executions among U.N. member states. In Uganda, 170 death row prisoners have been pardoned. Sentences of 400 prisoners on death row were commuted to life sentences following our appeal to the Constitutional Court. The court ruled that the mandatory death penalty was unconstitutional. That was good for us but we wanted the court to equally declare the death penalty itself unconstitutional. But the judges did not. We have not had an execution since 1999, though there are 100s of prisoners on death row in Uganda.

Q: What personally drives you to campaign against the death penalty? A: I would not be talking to you today if the state had murdered me… We had a full trial and the state called several witnesses. The judge and the assessors concluded that the state had proved its case beyond a reasonable doubt and was satisfied that we committed the offence. We were convicted and sentenced to death. All this happened while George William Wandyaka, the man they claimed we had killed, was hiding in Jinja district and enjoying life. I spent 18 years on death row and two years on remand. My cousin and I could not believe that a legal system would convict innocent people.

Q: So your conviction was due to an error in the justice system then. Is this common in Uganda? A: I have always said that errors in the justice system have lead to the execution of innocent people. My conviction was a typical example… In a country like ours where police investigations are done from the office, you cannot rule out (the possibility) that the evidence they take to courts is defective and leads to wrongful convictions.

Most of the prisoners who were executed while I was on death row were innocent but faced the gallows because they were poor. They could not afford to hire lawyers to defend themselves. In our case we had a state lawyer whom we only met twice. We did not have a lawyer in the real sense. There are also cases of widespread torture during interrogations so some suspects, especially in treason cases, end up admitting to crimes they have not committed.

Q: What was life like on death row? A: Life is terrible on death row in Uganda. No one was ever given any notice that they would be executed. Each time we were taken by complete surprise. We lived in complete fear of any unusual activity from the wardens.

In Uganda, conditions for death row prisoners are cruel, degrading and inhumane. We were always denied medication. In 1984 my cousin developed malaria and stomach complications. I pleaded with the prison authorities to give him treatment but they told me that we were brought to prison to face death and that it was a waste of taxpayer’s money to treat him. My cousin died in 1985. This really scared me.

Q: Were there executions at the time you were in prison? A: There were five rounds of executions. The last one was in 1999, where the state executed 28 prisoners. But to make matters worse for the inmates, executions were carried out in a nearby place. We would hear the crying of inmates (before their execution). Executions normally took place at night. When a prisoner reached the gallows, we would all listen. After a few moments, we would hear a loud sound like a sudden explosion, as the trap doors of the gallows sprang open and the prisoners were dropped to their death. We would then hear the corpses fall with a loud bang on the death table.