NEW YORK, Sep 11 2011 (IPS) - Karen Keyworth is frustrated by the racial profiling and ignorance frequently displayed towards Muslims and Arabs in the United States after 9/11. 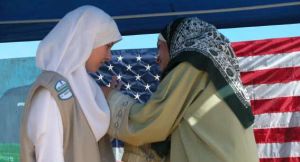 U.S. society is “not doing a good job separating out terrorism from Islam”, she told IPS.

A Muslim for 35 years, she said she has witnessed and experienced the “incredible ignorance” of those who equate Islam with terrorism, a belief she senses has worsened steadily since 9/11.

The effects of profiling have been seen and felt in a range of ways, but a less visible one has been the increase in enrolment in Islamic schools across the U.S.

According to Keyworth, co-founder and director of education at the Islamic Schools League of America (ISLA), enrolment in Islamic schools has risen from about 32,000 in 2006 to about 40,000 or more today, even though the increase in the number of Islamic schools over the same time period is only between five and 15.

Keyworth said that ISLA hadn’t looked at reasons for increases in enrolment, but she noted that some Islamic schools have indicated that parents are placing their kids in Islamic schools because of the discrimination they’ve faced in public ones.

Parents decide to enrol their children in certain schools for many reasons, she explained, but “safety is an important issue”, though she could not declare direct links between 9/11, greater discrimination in non-Islamic schools, and increased enrolment in Islamic schools.

Janet Penn, executive director of Youth LEAD, suggested that the growth in enrolment in Islamic schools could also be due to parents’ wanting their children to maintain an Islamic identity in a post-9/11 world. She explained that after 9/11, she saw some Muslims wanting to dissociate themselves from Islam, while others chose to embrace it.

Youth LEAD is a non-profit based in Sharon, Massachusetts devoted to facilitating interfaith dialogue and community-building activities among youth from different faiths and backgrounds.

The enrolment numbers in Islamic schools may represent a minority of the U.S. population, but they, along with many other incidents and phenomena, nevertheless beg further examination of the ideas that have continued to shape U.S. culture, society and beliefs since then.

The weeks immediately following 9/11 contain stories of large-scale arrests and detention of Arab and Muslim Muslims as primary suspects of terrorism.

In November 2001, then-U.S. Attorney General John Ashcroft announced sweeping new counter-terrorism measures. One of them included supposedly voluntary interviews conducted by the Federal Bureau of Investigation or other law enforcement personnel of more than 5,000 men, mostly Middle Eastern, in the United States on temporary visas, even if they weren’t suspected of any crimes.

Politicians and the media are responsible for exploiting the relationship between the 9/11 attacks and extremist political Islam, Keyworth believed. Rather than clarifying the fact that extremist political Islam is a complete departure from the mainstream moderate Islam practiced by the vast majority of more than 1.5 billion Muslims around the world, the media instead has not stopped “painting every Muslim as a terrorist”, she said.

Now, Keyworth explained, Muslims are being asked, “Can you be a Muslim and an American – a loyal American?”, a question that suggests the two identities are incompatible.

She believes political leaders should do better educating the public and dispelling inaccurate stereotypes and portrayals of Muslims. Yet they don’t, because addressing the issue is not politically expedient, she said.

Arab and Muslim Americans are not the only ones targeted for discrimination. Others with similar features, or simply mistaken for Arab or Muslim through sheer ignorance, have been targeted as well. Cases have been reported where Sikhs and Hindus, for instance, were subjected to racial profiling.

Hope for a better future

Still, 9/11 has brought about positive as well as negative change in U.S. society, some say, and the opportunity for change and growth is certainly present.

Penn said she believes that Muslims have become more outspoken in trying to educate their communities about Islam and Muslims in order to dispel racial profiling and stereotypes.

Before 9/11, Muslims in the community were invisible, she told IPS. “After 9/11, there was a huge upsurge in interfaith activities,” where Muslims put forth “large-scale efforts to say, ‘This is who we are, please get to know us,'” she added.

Such community activism can help to counter the media’s racial profiling, Penn stated. But she also acknowledged the engagement required in order to make those efforts successful.

“You can live in a diverse place and not ever interact,” she pointed out.

Despite her critique of the media and politicians, Keyworth as well expressed optimism that U.S. society could learn to cope with its fears about threats of terrorism – without resorting to stereotyping and racial profiling.

Keyworth shared that on an individual level she had seen signs of increased awareness and understanding that she found encouraging. And even though she believes that widespread societal change in the country is a long ways off, “I think here is enormous hope,” she concluded.