ROME, Oct 12 2011 (IPS) - Civil society organisations and global farmers’ networks are gathered in Rome this week to ask governments to stop the “disastrous practice of land grabbing”, ahead of next week’s Committee on World Food Security. 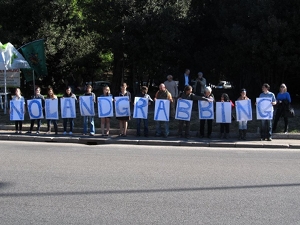 Outside the Food and Agriculture Organisation (FAO) building in Rome. Credit: Crocevia

From Oct. 11 to 14, the Rome-based U.N. Food and Agricultural Organisation (FAO) is running intergovernmental negotiations on land governance.

After six years of negotiations involving governments, international organisations and civil society groups, this session is expected to adopt voluntary guidelines on responsible governance of land and other natural resources. These guidelines would protect and strengthen access to land, fisheries and forests for indigenous peoples and small-scale producers, especially women.

According to farmers’ organisations, the guidelines currently under negotiation could become an instrument “to keep financial speculation out of peoples’ lands, water and forests and to overcome a system of governance that facilitates the takeover of peoples’ natural resources by corporate investors and other powerful actors”.

The issue seems most crucial now that the global food and financial crises have made maintaining livelihoods impossible for farmers, their communities and small-scale producers unless their land is preserved.

A recent report by Oxfam identified 227 million hectares of land, an area the size of northwest Europe, as having been reportedly sold or licensed – largely in Africa and mostly to international investors – through thousands of secret deals since 2001.

The issue implicates Europe and the U.S equally.

According to a recent report on land grabbing, released earlier this month by Friends of the Earth, more than 60 percent of land consumed in Europe is imported, while U.S. demand for imported land increased by 100 million hectares between 1997 and 2004.

In many cases, land is being used to grow crops for biofuel markets.

“We want to make sure that governments understand our position on the disastrous (impacts) of land grabbing on international investments in agriculture,” Kalissa Regier, youth vice president of Canada’s National Farmers Union (NFU) and member of La Via Campesina, told IPS.

“The situation is particularly disastrous for young farmers. Every time farmland is (taken) from the rural community, it can never be regained by families or the younger generation who once had a chance to be part of their land, part of their families’ heritage.”

Areas where farmers have secure land tenure and access to arable land have decreased incidence of food insecurity, she added. But once land is lost “through land grabbing, corporate investments in agriculture or government investments in farmland”, it cannot be regained, she said.

Regier, an organic grain producer in Canada, said the impacts of this issue would last for hundreds of years and stressed that land grabbing is not limited to the global South, but that people around her were experiencing it as well.

Land grabbing is “manifesting itself differently depending on the social and economic structures” in different regions, she said. ” In Africa, Asia and South America, you see the disastrous impacts of poverty, hunger and displacement of communities,” while North America has seen many of its youth shift from rural areas into cities alongside huge amounts of foreign investment in farmland.

Olivier De Schutter, the U.N. special rapporteur on the right to food, recently urged the adoption of common guidelines on land governance.

He stressed that “governments should be wary of speculation and concentration of ownership when land rights are transferred to private investors to develop farmland”. He added, “Harmful investments to the detriment of local populations – or land grabbing – can only be warded off if we first secure the underlying rights of farmers, herders and fisherfolk.”

On Tuesday, farmers’ delegates in Rome submitted the Dakar Appeal, a document prepared during the 2011 World Social Forum in Senegal, to the president of the U.N. Committee on Food Security (CFS).

The appeal, which calls on governments to put an end to land grabbing and urges the CFS to reject the World Bank principles for responsible agricultural investment, is endorsed by over 700 organisations worldwide.

Farmers are also extremely concerned about the implementation of guidelines.

“We are participating (in high-level discussions) here… but finally we want this paper to be reflected in the life of the woman who depends on fish from the lake, whose children go to sleep hungry because the fish in the lake have been taken by a big company from another country,” Rehema Bavuma, a Ugandan delegate from the World Forum of Fish Harvesters and Fish Workers, told IPS.

Bavuma works on the bank of Lake Victoria, Uganda.

“Traditionally, women and men near the lake have depended (exclusively) on fish. The men fished and the women cooked or smoked the fish, for eating or selling to their neighbours.”

However, Bavuma said, this is not happening anymore. “They still live near the lake but they are not allowed to fish because the government has given rights to big companies to take fish from the lake and sell it, but local people cannot afford to buy it, as it is very expensive.”

“These people have no food, no jobs, no water and no income. If our governments negotiate (guidelines) on behalf of their peoples, we want to see (those rules) adopted and implemented.” She added that land grabbing affects water supplies and other resources as well.

Farmers’ networks are expecting governments to take a strong position in the negotiations on land tenure by openly opposing land grabs and ensuring communities’ rights and human rights are protected.

Outcomes of the FAO negotiations are expected by Friday.