SOUTH KOREA: Trouble in Paradise – The Militarisation of Jeju Island

JEJU ISLAND, South Korea, Nov 10 2011 (IPS) - The South Korean government has been campaigning to have its southern island of Jeju recognised as one of the seven new wonders of nature. A favourite honeymoon spot in Asia and an official “island of peace”, Jeju already boasts several UNESCO World Natural Heritage sites. 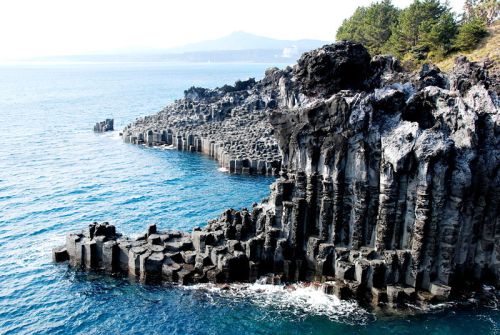 There’s an extinct volcano at the island’s centre, miles and miles of exquisite coastline, extraordinary lava formations on land and coral formations at sea, and…a huge naval base currently under construction.

An increasingly vocal anti-base movement believes that one of these things is not like the others. Anti-base activists have gone to jail, gone on hunger strike, and gone to great lengths to stop the Korean government from building the 970-million-dollar military facility in the southern part of the island in Kangjeong Village.

“The most beautiful coastline on this most beautiful island is the Jungdeok coast, and it is also the base construction projects epicentre,” says Matthew Hoey, an arms control analyst who is the international coordinator of the Campaign to Save Jeju Island.

“This base site is about two kilometres from the nearest UNESCO World Natural heritage site. It is madness that the government is allowing the military to destroy the beauty of the island to build this dangerous facility. It could undermine Jeju’s UNESCO status in the future without a doubt. As for the Seven Wonders competition in light of the base construction project, it is the ultimate hypocrisy.”

The South Korean government plans to open the naval base in 2014 to host submarines, warships, and the three new Aegis-equipped destroyers that cost South Korea one billion dollars each. The government argues that the base will protect sea lanes for Korean commerce and bring economic benefits to the island.

But Korean activists see different motives for the Jeju naval base. Under the terms of their mutual security alliance, the United States can use any South Korean military facility, and that would eventually include the Jeju base.

With President Barack Obama attending the APEC Summit in Honolulu this week and then heading off for points further west including Australia and Indonesia, the United States is pledging a refocus on Asian issues.

In a widely cited article in Foreign Policy magazine, Secretary of State Hillary Clinton declared that, after 10 years of focusing on Afghanistan and Iraq, “one of the most important tasks of American statecraft over the next decade will…be to lock in a substantially increased investment – diplomatic, economic, strategic, and otherwise – in the Asia-Pacific region.”

It’s the “strategic” part that worries Wooksik Cheong, who sees the Jeju base as a key node in the missile defence system that the United States wants to construct in the Asia-Pacific.

“The United States argues that Okinawa and Guam form a single integrated battle field with the Korean peninsula,” he says. “So, Washington argues that Seoul should contribute to protecting these islands from the ballistic missile threat from China or North Korea.”

Since it has a relatively small nuclear arsenal, China has interpreted such a missile defense system as potentially neutralising its deterrent capabilities. If China expands its nuclear and ballistic missile arsenals as a result, the naval base at Jeju would help stimulate an arms race in the region.

In Kangjeong Village, meanwhile, opinion is divided on the base issue. The mayor of the village went to jail at the end of August as part of his opposition to the base, and he remains there still. Dozens of other protestors have gone to prison, including South Korea’s foremost film critic Yang Yoon-Moo, who conducted a 71-day hunger strike that garnered national and international attention.

Jeju Island has a long history of resistance to outside pressure that goes back at least as far as the military campaigns against the Mongol invaders in the 13th century. For some people on Jeju island, the anti-base movement recalls earlier experiences of resistance, particularly the uprising of Apr. 3, 1948 that the Korean government, with U.S. military support, brutally repressed.

During that precursor to the Korean War, government forces and right- wing militias killed one-tenth of the population, or 30,000 people, and tens of thousands of islanders went into exile in Japan.

“The Jeju people around me, they hardly know the real situation, and many think the naval base will keep the country safe,” says Hye Kyoung An, a Jeju activist. “Someone like me thinks that the naval base will give Jeju people trauma, like what came from Apr. 3. But some other people think totally the opposite. They think a strong military can protect the people of Jeju.”

A majority of islanders favour a referendum on the issue, according to a survey conducted by the provincial government. The South Korean government has not shown any interest in holding a referendum.

Activists have cited potential environmental damage and the destruction of priceless archaeological ruins as reasons to halt the construction. The South Korean government has said that 15-20 percent of the base construction has already been completed.

“That 20 percent completion figure is one of the great misconceptions of the base project and the progress to date,” counters Matthew Hoey. “That number reflects the amount spent on the base construction to date out of the total base budget. Keep in mind that a tremendous amount of money has been wasted due to the crackdown on villagers and efforts to suppress the protesters’ right to free speech and public assembly which has resulted from the illegal process that led to the base plan approval in the first place.”

Voting for the seven new wonders of nature ends on Friday – 11/11/11. Jeju is in very good company. The 28 finalists include the Grand Canyon and the Great Barrier Reef. Neither the website nor the campaign billboards that dot the island, however, mention the Jeju naval base.