KANDAHAR, Jan 26 2012 (IPS) - A red flare lights up the moonless night at a remote military outpost in southern Kandahar, a signal to land for the incoming helicopter. Bordering Pakistan, this desolate strip of desert is deadly, especially during peak ‘fighting season’ every summer between NATO-ISAF military forces and the Taliban. 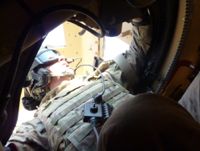 A gunner in an MRAP. Credit: Rebecca Murray/IPS.

U.S. troops with a stretcher rush toward the hovering Blackhawk dispatched alongside armed ‘chaser’ helicopters from Kandahar Air Field (KAF), a 20-minute flight away. Medics rapidly load in a pale but stable 20-year-old soldier whose armoured vehicle hit one of the region’s ubiquitous improvised explosive devices (IEDs), its shrapnel ripping up his left leg.

“IEDs are the most common call we get,” says Sgt. Megan Bergman, a 22-year-old medic with the 52nd Aviation Regiment’s ‘Artic Dustoff’ company from Fort Wainwright, Alaska, and assigned to KAF to respond to the past year’s record-breaking attacks.

“They just blow the body to pieces – blows your limbs and breaks your body, and burns too. When you have dismounted IED (attacks) you only get one or two casualties, but in an MRAP (mine resistant ambush protected) or Stryker vehicle you get five or so,” she explains.

Senior medic First Sgt. Jeffrey Pinnell, who has served on three continents, including the war in Iraq, agrees. “You can look at war ever since I joined the army and you won’t see the same traumatic injuries as you do here.”

KAF is the largest military base for the North Atlantic Treaty Organisation (NATO), and a priority destination in Afghanistan’s south for the critically wounded before they are transported to Landstuhl military hospital in Germany.

On the side of the tarmac, body bags are discreetly unloaded from military craft outside KAF’s morgue, tucked behind NATO’s new state-of-the-art ‘Roll 3’ hospital run by the U.S. Navy to handle the influx of serious injuries.

The Afghanistan NGO Safety Office (ANSO) documents a record-breaking 13,983 operations by armed opposition groups in 2011 – the highest in the past five years of the war. Forty-four percent of these attacks are from IEDs and indirect fire of mortars and rockets.

According to the U.S. Congressional Research Service (CRS), total Coalition Force fatalities in Afghanistan since the 2001 invasion have reached 2,876, with U.S. troops accounting for 1,730. There were 252 deaths from IEDs in 2011: just over 51 percent of the year’s total fatalities.

“The IEDs here are much larger,” says Cpt. John Mastalski, a U.S. Navy doctor in KAF’s Roll 3 trauma bay, who also worked in Iraq. “It seems over time as we make bigger armour, the IEDs become bigger.”

“Probably the biggest change to saving lives is the training of the army medics,” Cpt. Meneley adds. “They are trained to a level they have never been historically. We would see people in Iraq that bled to death basically. Now the use of tourniquets is so prevalent and so well taught, we are getting people alive despite tremendous injuries.”

Cameron Kerr, 24, was a platoon leader in the 1-75 Calvary Regiment based on Forward Operating Base Wilson in volatile Zahari district, Kandahar, in 2010 and 2011. Because IEDs are commonly planted on roads, Kerr often led patrols that jumped walls and waded through orchards.

It was in a grape field last February that he stepped on an IED, the blast throwing him five feet away. A medivac unit soon flew him to KAF’s Roll 3 hospital, where his left leg, outfitted with a tourniquet, was immediately amputated below the knee.

Kerr returned to the U.S. for rehabilitation at the military’s Walter Reed hospital. “There were just as many double amputees, and several triple amps. It gave me perspective,” he says. He laughs as he says those with single amputations were nicknamed “papercut”.

While the CRS records 14,342 total injuries from the 2001 invasion until October 2011, real numbers are suspected to be much higher. These include undiagnosed Post Traumatic Stress Disorder (PTSD) and Traumatic Brain Injuries (TBIs), often debilitating mental damage from the force of blasts.

The U.S. Department of Defence says 229,106 troops have suffered variations of TBI from October 2001 to November 2011, based on electronic health records of soldiers’ screening and diagnosis test results. The Department for Veteran’s Affairs officially estimates up to one in five soldiers serving in Iraq and Afghanistan this past decade suffer from PTSD.

Graham Clumpner, 27, is an ex Army Ranger who served in eastern Afghanistan. In February 2005 after a night raid in a village mistakenly stretched until dawn, Clumpner’s humvee was rocketed, and flipped. He was hurled into a wall and blacked out for what he describes as over ten minutes. When he regained consciousness he drove back to the base. “It was just actions, I was doing what I was told,” he says. He finished the remaining two months of his rotation.

Clumpner says his company was asked to fill out forms evaluating their mental health before they returned to the U.S. He didn’t know what TBI was. “We were told if we replied ‘yes’ to the question, ‘are you angry?’ we would be kept in country,” he says. All the troops he was with marked ‘no’.

Clumpner suffered short-term memory loss, mood swings, and depression. He is grateful for the understanding of his college professors, which enabled him to graduate college.

He also credits Iraqi Veterans Against the War (IVAW), which provided him a strong support network. “We have developed good ways to keep people alive,” he says. “But when you get back to the U.S. there is no rehabilitation, especially as you are an individual, and removed from your unit.”