CARACAS, Jan 3 2012 (IPS) - Countries that have always depended on imported oil and gas, like Chile, Paraguay, Poland or Ukraine, and especially heavy consumers such as the United States and China, could become self-sufficient in natural gas in the near future and even start exporting it. 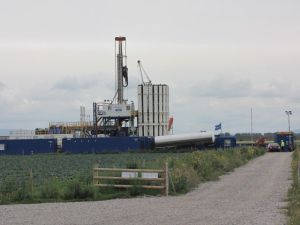 Shale gas – natural gas extracted from shale rock – may well be several times more abundant than the proven reserves of conventional natural gas on the planet, according to the U.S. Energy Information Administration (EIA). Moreover there are large volumes of natural gas in sandstones, and other non-conventional sources.

But the real news from EIA studies is that shale gas is abundant in territories previously regarded as poor in fossil fuels or dependent on imports: China, the United States and Argentina head the list, but large reserves are also found in South Africa, Australia, Poland, France, Chile, Sweden, Paraguay, Pakistan and India.

“The global energy chessboard is changing, and markets will be realigned. Countries that have never had so much available energy will become self-sufficient, and perhaps even exporters,” Luis Alberto Terrero, head of the Venezuelan Gas Processors Association (AVPG), told IPS.

As gas supplies grow, “fossil fuels may become cheaper, the growth of alternative energies will slow down, and new alliances, investments and trade networks will be established,” Terrero said.

Furthermore, some countries long dependent on foreign suppliers would have a huge resource base compared with their consumption: for example France and Poland, which import 98 and 64 percent, respectively, of the gas they consume, are in possession of shale gas reserves estimated at over 180 Tcf each.

In South America, giant oil producer Venezuela is estimated to have only 11 Tcf of shale gas, barely one-twentieth of its conventional gas reserves, while Brazil and Chile, which currently import about half the gas they consume, possess estimated shale gas deposits of 226 and 64 Tcf, respectively.

Paraguay has an estimated 62 Tcf of shale gas, nearly three times the conventional gas reserves of Bolivia, the top exporter of natural gas in South America. Uruguay, which imports all of its oil and gas as it lacks both, has at least 21 Tcf of shale gas.

“So far this century, this is the biggest innovation in energy, in terms of scale and impact,” according to U.S. analyst Daniel Yergin, author of a classic history of the oil industry, “The Prize: The Epic Quest for Oil, Money and Power”, who emphasised that one-third of all the gas produced in the United States is already extracted from shale gas reserves.

High volumes of water are used for hydraulic fracturing, or fracking, the method of extracting shale gas, which can also cause seismic activity. Disposal of the waste water may cause pollution of surface and groundwater. Extracting shale gas from a platform with six wells can use 170,000 cubic metres of water.

Therefore exploration for non-conventional gas must go hand-in-hand with technologies to reduce water consumption and the other harmful effects, including destruction of the landscape.

Terrero noted, for example, that exploitation of extra-heavy crude in Venezuela’s Orinoco Belt or under the North Sea used to be regarded as technologically non-viable, yet today production is going full steam ahead, while drilling for oil and gas in the Arctic will proliferate from 2012 onward.

Furthermore, high oil prices of over 100 dollars a barrel encourage operators to explore for, produce and sell not only shale gas but also “tight gas” (trapped in impermeable, non-porous sandstone or other rock formations) as well as shale oil and “tight oil”, similarly locked underground.

“We’re heading toward greater availability of fossil fuels. Oil, gas and coal represent 80 percent of the global energy mix, and will continue to predominate for decades,” Kenneth Ramírez, a professor of geopolitics and energy at the Central University of Venezuela, told IPS.

In Ramírez’s view, “the abundance and new distribution of reserves of shale gas and other non-conventional fossil fuels will affect predictions about the relationship between energy and the economy, and will have major geopolitical effects.

“An initial effect is that the largest and best discoveries are outside the Organisation of the Petroleum Exporting Countries (OPEC),” which will see its influence on the global energy market diminish in the long run, the expert said.

At the same time, Ramírez said, Russia will embark on the race to consolidate its position as a major global actor on the basis of its energy resources; Canada will emerge as a world oil power; and the United States, its supply secure, could feel freer from the vagaries of Middle East conflicts.

The same could be said for emerging nations of the global South, such as China, India, South Africa and Brazil, which will be able to avail themselves of abundant non-conventional gas.

In Latin America, production in Bolivia or Trinidad and Tobago, or the offshore projects in Venezuela, no longer appears so essential for the long term, while in the northern Mexican state of Coahuila and the southern Argentine province of Neuquén, drilling is under way for the first shale oil and gas extractions.

The big disadvantage of shale gas, despite the industry’s hopes for developing more eco-friendly technologies, is its impact on the environment during production and transport.

The extraction of shale gas requires large quantities of water mixed with sand and chemical additives. The carbon footprint – the amount of carbon dioxide-equivalent greenhouse gases emitted by the process – is much greater than for conventional gas production.

Fracking involves injecting this fluid under pressure into drill holes deep in the earth’s crust, to create fractures in the rock that increase the rate of recovery of shale gas. This process runs the risk of damaging the subsoil, soils, surface and underground water tables, the landscape and communication routes if the arrangements for extracting and transporting the material are defective or mishandled.

More methane, a potent greenhouse gas, is released during shale gas extraction and use than with conventional methods, and this adds to global warming. But so far, environmental concerns have not abated the global thirst for energy resources like those trapped in shale formations.