WASHINGTON, Jan 30 2012 (IPS) - The decision by the administration of President Barack Obama to approve limited transfers of military equipment to Bahrain is coming under renewed fire by human rights and pro-democracy groups here. 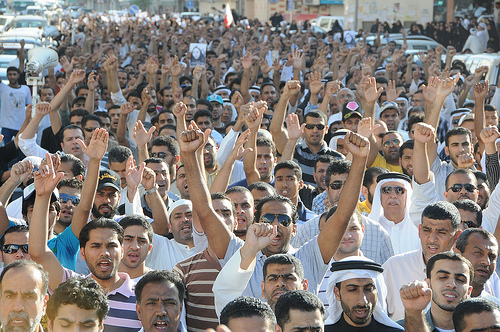 The groups, as well as a number of lawmakers who have opposed renewed arms transfers to Bahrain, are demanding that the administration publicly disclose precisely what it intends to provide the Gulf kingdom.

And they are warning that any military transfers at this time will almost certainly be seen by pro-democracy opposition forces as support for a repressive regime.

“Even a limited sale of military items to the Bahraini government sends the wrong message,” said David Kramer, the president of Freedom House, a pro-democracy group that receives support from the Congressionally funded National Endowment for Democracy (NED).

Other groups were slightly more circumspect. “Because the details (of the sale) are secret, it is difficult to independent determine whether the U.S. government is providing the kinds of weapons and ammunition, and/or equipment that Bahraini security forces could use in the commission of further human rights violations,” according to Sanjeev Bery, advocacy director for the Middle East at Amnesty International’s office here.

“At a time when Bahrainis are experiencing human rights violations at home, it doesn’t look good to be handing their government additional military equipment,” he added, noting the deaths in January of as many as nine Bahrainis from tear-gas inhalation or being struck by tear-gas canisters at close range.

Longstanding relationships between Washington and the militaries of friendly but repressive governments during the so-called “Arab Spring” over the past year have become increasingly problematic.

Human rights and pro-democracy activists, backed by some lawmakers in both parties, are pressing the administration to suspend the annual 1.3-billion-dollar allotment of U.S. assistance to the Egyptian military until the Supreme Council of the Armed Forces (SCAF), which has held power since former President Hosni Mubarak was forced to step down one year ago, ceases what they say is its persecution of local and international non-governmental organisations (NGOs).

In recent days, the administration has suggested that it may indeed do so unless Cairo permits a half dozen NED-backed pro-democracy activists, whose offices were raided by Egyptian security forces earlier this month as part of an investigation into foreign funding of Egyptian NGOs, to leave the country.

Continuing U.S. counter-terrorist assistance to Yemen over the past year while President Ali Abdullah Saleh, who just arrived in the United States for medical treatment over the weekend, clung to power in the face of massive pro-democracy protests has also drawn strong criticism from rights groups, in particular.

The situation in Bahrain has also caused the administration major headaches over the past year. Like Egypt, which has served as a reliable U.S. partner, particularly in maintaining peace with Israel, since the 1979 Camp David Accords, Bahrain has been seen as a major strategic asset in the Gulf.

Home to the U.S. Navy’s Fifth Fleet, the kingdom has become increasingly important as tensions between Iran on the one hand, and Israel, the Sunni-led Gulf states, and the U.S. on the other have ramped up over the past year, especially in the last few months.

Unique among the member states of the Gulf Cooperation Council, Bahrain’s ruling family, the al-Khalifas, reign over a majority Shi’a population which, along with some Sunni allies, has been agitating for democratic reform.

Reinforced by some 1,500 troops and police from Saudi Arabia and the United Arab Emirates, the monarchy, which claimed that Shi’a-led Iran was trying to subvert the country, cracked down hard against the month-old pro-democracy movement beginning in mid-March.

Over the following months, more than 40 protesters were reported killed, thousands were arrested – many of them tortured while in detention – and hundreds more were dismissed from their jobs in a wide-ranging campaign of repression.

Although the administration initially denounced the crackdown, it remained relatively quiet through most of the rest of the year.

Privately it sought – albeit unsuccessfully – to bolster the reformist wing of the ruling family, led by Crown Prince Salman bin Hamad al-Khalifa, against the hard-liners, warning that the repression – which featured virtually nightly raids by security forces against Shi’a neighbourhoods and villages – would radicalise the Shi’a majority and drive into Iran’s arms.

In September, however, the administration quietly notified Congress that it intended to sell 53 million dollars worth of mainly anti-tank missiles and armoured Humvees to Bahrain, drawing strong protests from rights groups and lawmakers who argued that the Humvees, in particular, could be used against protestors.

While Congress did not stop the sale, enough questions were raised to persuade the administration to promise to delay delivery until an international commission appointed by the king to investigate the spring’s events issued its report in November.

In the event, the Bahrain Independent Commission of Inquiry (BICI), which was headed by Egyptian-American jurist, Cherif Bassiouni, issued a damning report that, among other things, urged the prosecution of responsible officers, the release of detainees, the reinstatement of fired workers, and the launch of a serious dialogue between the government and the opposition leading to constitutional and democratic reforms.

The Obama administration said it would tie the delivery of the pending military package to the implementation of the recommended reforms and the general human rights situation.

While the government has since taken some tentative steps toward compliance, both the legal opposition and most analysts here agree that they have fallen far short of the minimum they had hoped for. And rights groups have reported a deterioration in the human-rights situation.

In addition to the tear-gas fatalities, the head of the respected Bahrain Center for Human Rights, Nabeel Rajab, was beaten by police after a protest earlier this month, while international rights groups, including Freedom House and Human Rights First, have been denied entry into the kingdom.

Nonetheless, as first reported by “The Cable” blog on foreignpolicy.com, the administration notified a number of Congressional offices last week that it is going ahead with the transfer of some items, including “spare parts and maintenance equipment …needed for Bahrain’s external defense and support of Fifth Fleet operations,” according to the State Department.

It said that the value of these transfers “are not large enough to require Congressional notification”.

“None of these items can be used against protestors,” it said in a prepared statement.

But, amid concern that the administration may be breaking up the original package into smaller pieces so as to avoid formal Congressional notification requirements, the rights groups say they want to know what the items are.

“A little more transparency from the administration on what this transfer is would be very helpful,” said Brian Dooley, a Gulf expert at Human Rights First who was one of those who was denied entry into Bahrain earlier this month.

“But you really have to question the timing of this,” he added, noting that tensions are once again on the rise in the run-up to the one-year anniversary of the first big pro-democracy demonstrations on Feb. 14.

“February looks extremely ominous,” he told IPS. “What will happen probably will be at least one and probably more attempts at large- scale protests, and the government shows no sign of being able to police those protests properly. Much smaller protests this month have been routinely attacked with excessive force.”