YAOUNDE, Feb 29 2012 (IPS) - Sala Aminata, a housewife from the Logone and Shari Division in Cameroon’s Far North Region, looks at her six kids with apprehension as she tries to figure out how to feed them with her meagre salary. 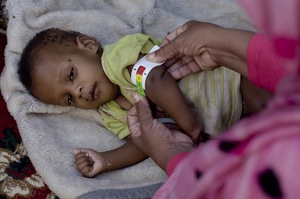 “I used to buy a bag of maize for 24.5 dollars,” she says. But now it costs 34.5 dollars, which is almost one third of her monthly income of just 101 dollars. And it is not just maize that has gone up in price. A bag of red sorghum has increased to 28.4 dollars from the 20.4 dollars it sold at last year. “Food prices are just rising and we are too poor to afford it,” she laments.

The rising food prices come after a drought late last year destroyed the majority of the harvest in the Sahel – the arid zone between the Sahara desert in North Africa and Sudan’s Savannas in the south. Rural populations throughout the region have started to run out of food since early February, six months before the next harvest is expected. And all governments in the Sahel, except for Senegal, have appealed for international assistance as 12 million people in the region are threatened by hunger.

The World Food Programme (WFP) has warned that some 400,000 people could be affected by hunger in the North and Far North Regions of Cameroon if emergency food supplies are not received by the end of March. In a survey carried out on the food security in the two regions, the

WFP says at least 40,000 tonnes of food will be required to save hunger- threatened people.

“Cereal production fell by 30,000 tonnes in 2011, compared to 2010,” the director of Food Security in the North Region at the Ministry of Agriculture and Rural Development, Ilonga Lazare, says. He blames the shortfall on the drought that hit the region in 2011.

“In the Logone and Shari Division, there wasn’t a drop of rain last year and in other parts of the North and Far North Region, slender rains came only in early October. So crops did not have enough water to grow,” Lazare says. He adds that Garoua, a port city in Cameroon’s North Region and the country’s political and industrial capital, receives between 500mm and 1,000mm of rain every year. “But last year, there were areas where rain did not fall at all.”

Lazare adds that government’s food stocks in a warehouse in Garoua need to be increased from six tonnes to eight tonnes before the end of March to prevent children from becoming malnourished and dying.

“For now, we need to target vulnerable groups like children who cannot stand famine for over a day,” he said. He explained that the additional two tonnes of food would help save the lives of children and pregnant women while the country waited for international aid agencies to deliver food relief.

Hunger and malnutrition are endemic in the northern part of Cameroon, located in the Sahelian and Sudano-Sahelian agro-ecological zones. This region has suffered from food crises for the last three decades as a result of natural and man-made disasters.

A Food Security and Vulnerability Analysis conducted in 2007 by the WFP found that poor agricultural production, low education and income levels, and inadequate infrastructure are responsible for vulnerability and food insecurity in this region.

The looming food crisis also raises security concerns. In 2008, about

100 people died in clashes with as poor nations across the world protested against rising food prices. “We have to avoid a repeat of the 2008 scenario,” North Region governor, Gambo Haman, told IPS by phone.

Cameroon spends on average 122 million dollars every year to import rice, sorghum, and millet. Last year, shortfalls in rice production led to the importation of 80,000 tonnes valued at 240 million dollars.

It may come a little too late, but at the start of the year Cameroon’s government announced it will be investing in the agricultural sector.

During a meeting of top officials of the Ministry of Agriculture and Rural Development, the minister, Essimi Menye says it is high time Cameroon makes strides in the agricultural sector.

“We need to see the impact of agriculture in our economy,” he says.

He says it is shocking to hear about Cameroonians “who go hungry when we have an arable land surface of 7.2 million hectares.”

But very little has been invested in the sector, with only 26 percent of total arable land currently being cultivated.