Extreme Weather is the New Normal

CAIRNS, Australia, Apr 3 2012 (IPS) - Extreme weather is fast becoming the new normal. Canada and much of the United States experienced summer temperatures during winter this year, confirming the findings of a new report on extreme weather. 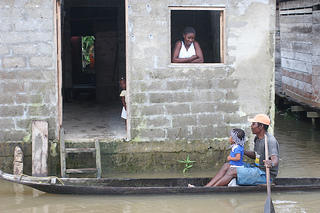 For two weeks this March most of North America baked under extraordinarily warm temperatures that melted all the snow and ice and broke 150-year-old temperature records by large margins.

A new report from the Intergovernmental Panel on Climate Change (IPCC), released Mar. 28, provides solid evidence that record-breaking weather events are increasing in number and becoming more extreme. And if current rates of greenhouse gas emissions are maintained, these events will reach dangerous new levels over the coming century.

Since 1950 there have been many more heat waves and record warm temperatures than in previous decades.

This will only increase in future decades, as will heavier rainfall events in tropical regions and the high latitudes, according to the Special Report on Managing the Risks of Extreme Events and Disasters to Advance Climate Change Adaptation (SREX).

The hottest day that occurs once in 20 years is likely to become a one-in-two year event by the end of the century, except in the high latitudes of the Northern hemisphere, where it is likely to happen once every five years.

The duration and intensity of droughts will increase in southern Europe and the Mediterranean region, central Europe, central North America, Central America and Mexico, northeast Brazil, and southern Africa.

Climate change-driven sea level rise combined with increases in extreme weather will make many places uninhabitable by the end of the century, said Christopher Field, co-chair of IPCC’s Working Group II, which together with Working Group I produced the report.

Places that are already struggling with these problems, such as some small island states and coastal cities like Mumbai, may be amongst those that will be abandoned in coming decades without major reductions in greenhouse gas emissions, Field said in a press conference.

There is no serious scientific debate that the dramatic increase in extreme weather is one of the clearest signs that burning billions of tons of fossil fuels has seriously and permanently disrupted the global climate.

“All weather events are affected by climate change because the environment in which they occur is warmer and moister than it used to be,” Kevin Trenberth, senior scientist at the U.S. National Center for Atmospheric Research, told Tierramérica.

Those additional enormous amounts of heat and moisture now trapped in the atmosphere are the potent fuel for extreme events. It makes little sense to debate whether individual storms or events were caused by climate change when the entire global weather system is being impacted, said Trenberth, who is also an IPCC author.

“The main message from the report is that we know enough to make good decisions about managing the risks of climate-related disasters. Sometimes we take advantage of this knowledge, but many times we do not,” said Field.

Guatemala and Colombia were amongst the worst hit by extreme storms and flooding in 2010, according to the Global Climate Risk Index, produced by a German NGO, Germanwatch. In fact, those countries suffered more than Russia, where a much-publicised heat wave killed an estimated 50,000 people.

The Index has analysed the impacts of extreme weather on the economy and society for the past 20 years.

Between 1991 and 2010, the top ten countries hardest hit by weather extremes in terms of damages and lives lost were all developing countries in the global South, with Bangladesh, Burma and Honduras at the top of the list.

“There is no question that extreme events and damages have been increasing,” said Sven Harmeling of Germanwatch. And it is not because there is simply more infrastructure to be damaged, Harmeling told Tierramérica from Berlin.

Countries are becoming more aware of the risks of extreme weather but few are taking measures to cope, despite the fact that it is far cheaper to prepare than to recover, he said.

It is difficult to allocate precious state or donor funding for a weather event that might not happen for many years. However, a country like Honduras, which was badly damaged by Hurricane Mitch in 1998 and other lesser storms and rainfall events that followed, has never recovered, Harmeling said.

In contrast, Bangladesh has been able to invest heavily in prevention and has suffered far less damage in recent years, he commented.

The IPCC’s SREX is a significant contribution, but there will be gaps, and it is does not have the latest science which provides clearer links between extreme events and climate change, according to Harmeling.

These include systems that warn people of impending disasters, changes in land use planning and ecosystem management. The report also recommends improvements in health surveillance, water supplies and drainage systems, as well as development and enforcement of building codes.

Both the Global Climate Risk Index and SREX findings “can be seen as a warning signal to be better prepared for a higher level of extreme weather events in future,” concluded Harmeling.