BAMAKO, Apr 19 2012 (IPS) - Cheick Modibo Diarra has been named interim prime minister of Mali as a transitional administration takes shape, to guide the country back to full constitutional government. But despite agreeing to hand power back to civilians, the military junta intends to retain an oversight role in the transition. 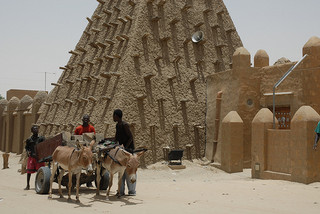 Timbuktu is one of the northern Malian cities seized by Tuareg and Islamist rebels. Credit: Emilio Labrador/CC BY 2.0

Diarra is a 60-year-old astrophysicist with dual U.S. and Malian nationality, who has previously worked for the U.S. space agency NASA and as the president of Microsoft Africa. He entered politics last year, establishing the Rassemblement pour le développement du Mali (RPDM) party, with the intent of contesting presidential elections originally planned for April 2012.

Those elections were abandoned following an uprising by Islamist and Tuareg rebels in the north and the Mar. 22 coup d’état which toppled the government of President Amadou Toumani Touré.

The interim prime minister, appointed in line with a framework accord for restoring civilian rule agreed on Apr. 6 between the coup plotters and the Economic Community of West African States (ECOWAS), must now address a complex crisis in the north of the country.

Dissatisfaction – both within the army and in the wider population – with the government’s response to the January uprising launched by the National Movement for the Liberation of Azawad (MNLA) rebels was a key factor leading up to the coup. But a growing cast of factions then took advantage of the instability following the coup to expand and consolidate their rebellion.

The north, including the three major cities of Gao, Kidal and Timbuktu, is entirely in the hands of the MNLA, the main Tuareg rebel group seeking independence for the region, and Islamist forces who want to impose Islamic law across a unified Mali.

Even as Diarra was being congratulated on his appointment as prime minister, the military junta continued to arrest leading political and military figures from the previous government, holding them at the Kati military base 15 kilometres outside the capital, Bamako.

Those arrested at the beginning of the week, Apr. 16 and 17, include Modibo Sidibé, prime minister under President Amani Toumani Touré at the time of the coup, and Babaly Ba, the director general of the Malian Solidarity Bank.

Wednesday Apr. 18 saw the arrest of Kassoum Tapo and Tiéman Coulibaly, two leaders of the civil society coalition against the coup.

“While we welcome a return to normal, constitutional order, several people are in custody,” lawyer Hamidou Diabaté told IPS. “We don’t understand these detentions. If people must be arrested, then this should be left to the judicial system.”

Diabaté is a member of a political group opposed to the coup, the United Front to Safeguard Democracy and the Republic.

Under the Apr. 6 accord, the junta led by Captain Amadou Sanogo agreed to hand power over to civilians. The former president of the National Assembly, Dioncounda Traoré, was duly made interim president on Apr. 12, but the arrests taking place while the transitional government is set up have raised fears among politicians.

“It’s only now that we’ll see Captain Sanogo’s true face,” Ousmane Maïga, a member of the youth wing of the Union for the Republic and Democracy party (whose leader, Soumaïla Cissé, is also among those in detention), told IPS.

“His only ambition is to remain in power.”

But the junta’s actions have the support of some civil society leaders. Responding to questions from IPS, Hamadoun Amion Guindo, president of Mali’s Trade Union Confederation of Workers (CSTM), said the soldiers must finish what they started.

Many trade unionists, associations and other political actors under the umbrella of the Coordination of Patriotic Organisations of Mali believe the framework accord gives the interim president the power to rule the country for only 40 days.

“ECOWAS and the military must find a consensus candidate to replace Dioncounda Traoré (after this period),” says Guindo.

The junta enjoys strong support in Bamako, particularly among the city’s poor. Wearing a badge bearing a picture of Sanogo, Fanta Sissoko, a resident of the Medina Coura neighbourhood, told IPS: “If the soldiers step down completely, the politicians will just continue with their corruption. We need new political leaders for the country to move forward.”

This backdrop only makes the task facing the prime minister in resolving the crisis in the north more difficult. Since Traoré was sworn in as president, initial contacts have been made with several of the insurgent factions. Around 200 soldiers who had been captured by Ansar Dine, the leading Islamist group in the north, have been freed and welcomed back to Bamako by the authorities.